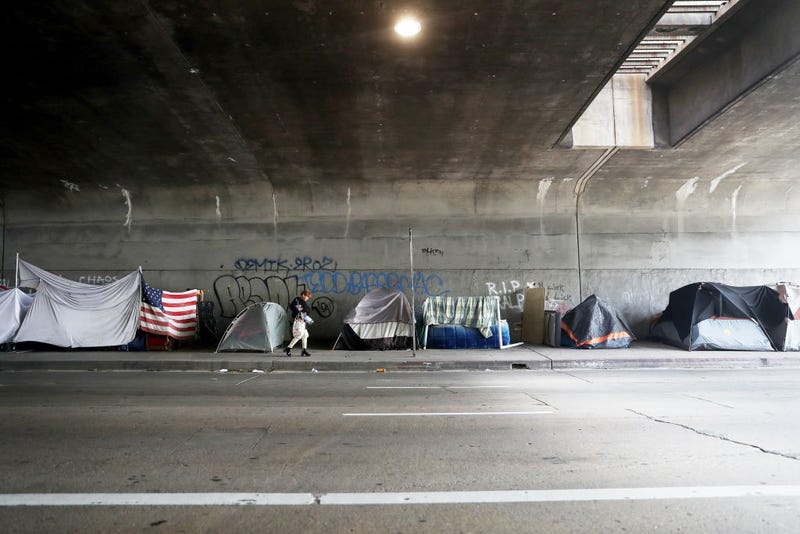 FILE - A woman walks past a homeless encampment beneath an overpass on April 4, 2020 in Los Angeles. Photo credit Mario Tama / Getty Images
By City News Service

Several council members expressed concern about the high number of locations being submitted for enforcement by Buscaino.

"My understanding is that we are going to do street engagement with all of the different sites that we have as we move forward (with enforcement). And I know in my district we've been doing that meticulously," said Councilman Bob Blumenfield, who had a resolution that was passed by the council to enforce encampment bans in certain areas of his district earlier this fall.

"With 161 sites, I'm concerned we're not doing the full street engagement. And I can't imagine that [Los Angeles Homeless Services Authority] has even done the assessment forms," he added.

The city's anti-camping law, which went into effect Sept. 3, prohibits sleeping, sitting, camping and obstructing the public right of way within 500 feet of "sensitive" facilities, including schools, day care facilities, parks and libraries.

It can be enforced once the council passes a resolution to designate a specific area for enforcement, posts signage and gives notice of the date that the ordinance will be enforced for the area.

Under the strategy, developed by the CAO and the chief legislative analyst, the following steps are supposed to be followed before a resolution is voted on by the council:

-The LAHSA and the council identify service and housing resources needed and their availability, develop an outreach plan and determine a time frame to execute the street engagement strategy;

-Daily performance reports and an end-of-engagement summary report is made available to the council, the Los Angeles Housing Department and the city's homeless coordinator regarding client contracts, engagements, services and referrals offered and other housing-related outcomes for outreach services; and

-A final cleanup date is determined and communicated to staff, and a formal documented "offer of housing" report is provided by LAHSA.

Buscaino told the council before Wednesday's vote that LAHSA had completed the steps within the street engagement strategy for nearly 100 of the 161 locations. His office told City News Service that most of those sites did not have encampments, but the resolutions were preventive.

Councilman Kevin de Leon, who chairs the Homelessness and Poverty Committee, said the committee would work with Buscaino and staff on the resolutions before moving them back to the full City Council.

Buscaino responded to concerns from his colleagues by saying, "nothing in [the anti-camping law] prohibits us or limits us from identifying a number of sensitive sites...we were never told that you can only identify 10 sites, 20 sites, 30 sites."

Councilman Gil Cedillo made a similar argument in favor of Buscaino's resolutions, and added that council members are best suited to make decisions for their own districts.

"He has put forth, as he is obligated to do, a number that at this moment he feels represents the best interests of his district. There's a principal involved here. The principal is...who is best positioned to apply that policy to the facts of their district," Cedillo said. "When you cast the vote, think about the principal that's involved here, the underlying principal of surrendering your duty, your obligation to your district to a committee after we've made a collective policy direction."

Along with Cedillo and Buscaino, Councilmen Marqueece Harris-Dawson and John Lee voted against sending the resolutions back to committee.

The ordinance also prohibits sitting, sleeping, lying, storing personal property or otherwise obstructing the public right of way without a resolution's passage in several areas of the city, including within two feet of any fire hydrant or fire plug; within five feet of any operational or utilizable entrance or exit; within 10 feet of a loading dock or driveway; in a manner that interferes with any activity for which the city has issued a permit or restricts accessible passage as required by the Americans with Disabilities Act; or anywhere within a street, including bike paths. 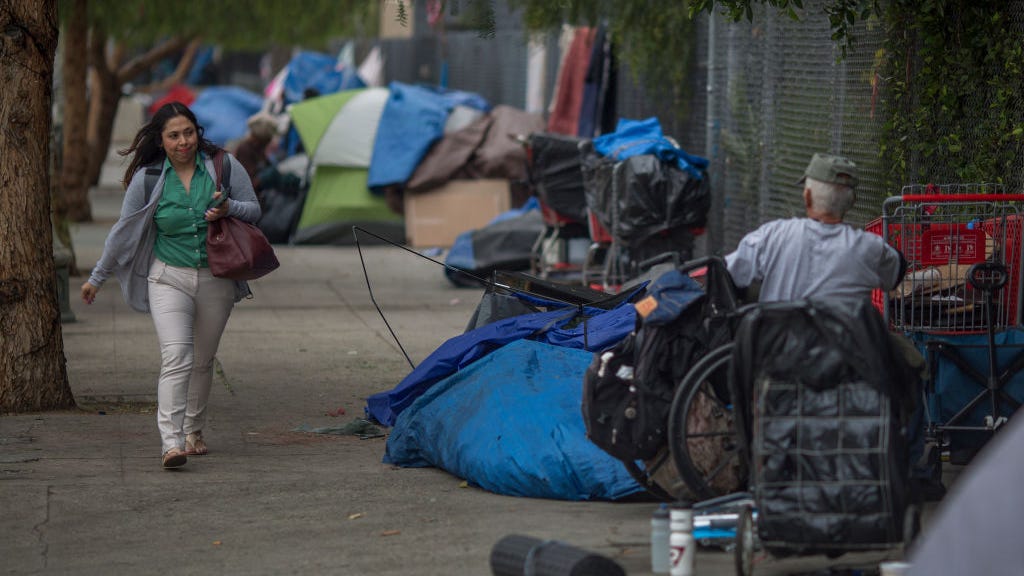 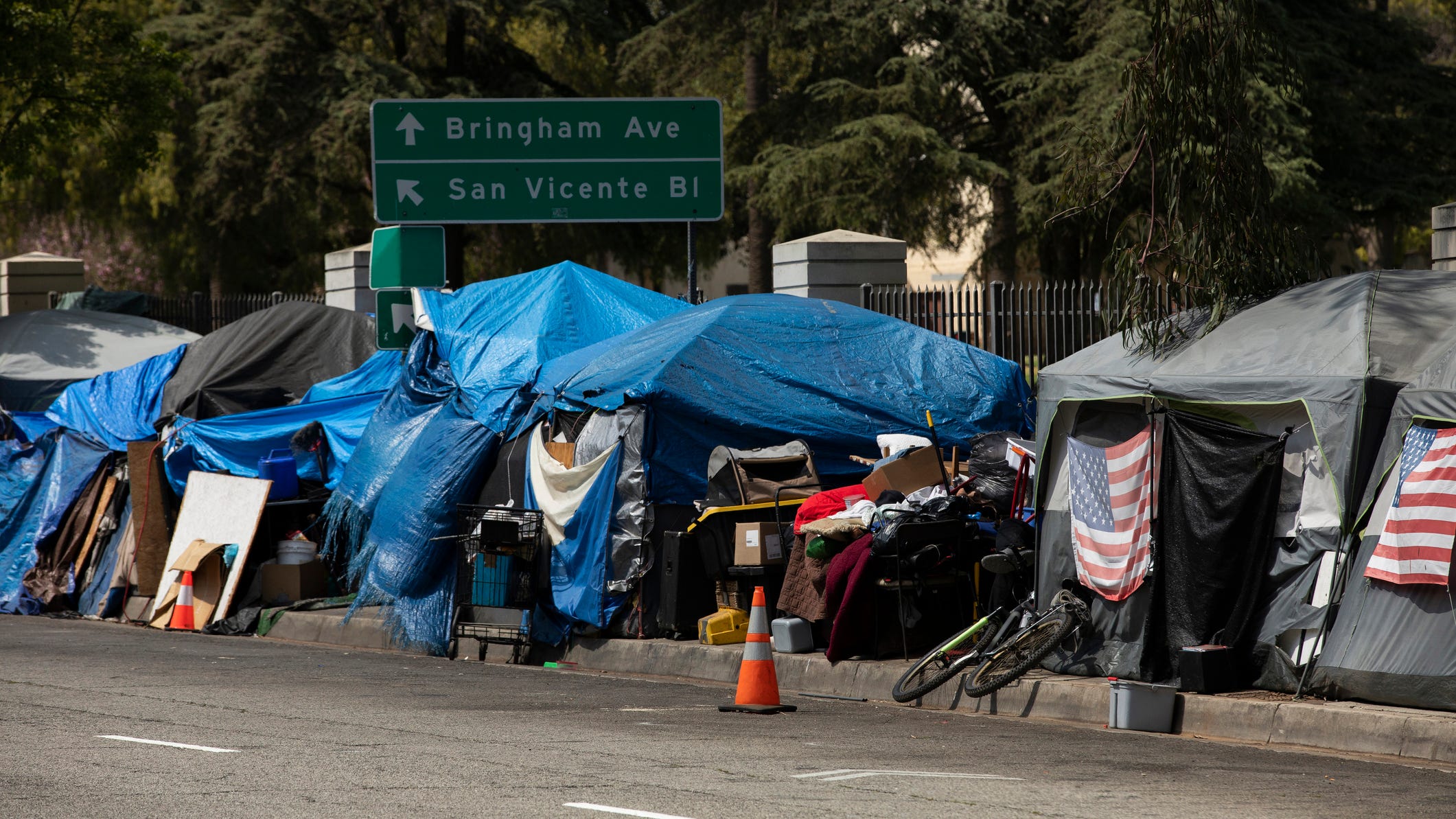