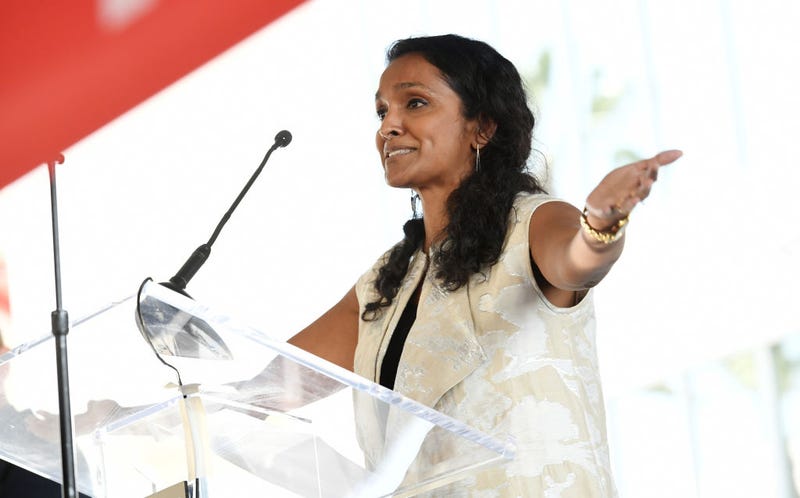 A Los Angeles city councilmember took to Twitter on Tuesday to express dissatisfaction with a draft map for new council district boundaries compiled by the L.A. City Council Redistricting Commission.

"Last week, the commission moved forward with a proposed map that "effectively 'erases' our district in its current form," Councilmember Nithya Raman wrote. "This happened despite the fact that the minimal changes in population in L.A. show no basis whatsoever for such drastic shifts."

Raman, who was elected to represent District 4 in 2020, pointed out that the draft map omitted details about two unlabeled sections. Either of the areas could be assigned to Raman's district or Councilmember Paul Krekorian's District 2, the borders of which both have yet to be determined.

The single map adopted by the Commission - Draft Plan K2.5 - assigns numbers to 13 of the 15 districts, but leaves 2 districts, the grey and blue ones, unassigned. They could be either District 2 or District 4. Confused? Yeah, we are too. pic.twitter.com/dtE3uI6UD9

Raman said whichever unlabeled section her district was assigned to, she stood to lose a substantial portion of the constituents who voted her into office last year—either 29% or all of them together.

"What's saddest to me is that these new maps decimate the voices of new voters in a historic election," Raman said Tuesday. "One that saw more renters, more young people and more people of color participate than ever before."

Krekorian also expressed frustration with the commission's proposed map, calling it a "disgraceful plan" and a "sad exercise in back-room dealmaking."

In an email to constituents ahead of the commission's vote to move forward with the map, he warned it could shift his district out of its anchor in the eastern San Fernando Valley to the west, shedding North Hollywood, Valley Glen, Studio City, Sun Valley, and Valley Village. Those districts would go to Raman.

From Raman's district, the draft map would carve away at least Sherman Oaks, Hancock Park, Miracle Mile, Park La Brea and parts of Silver Lake, where she resides.

Last week the LA City Redistricting Commission moved forward with a proposed map that effectively *erases* our district in its current form.

This happened despite the fact that the minimal changes in population in LA show no basis whatsoever for such drastic shifts. (thread)

The map "disempower voters of Armenian, Korean and other ethnic backgrounds," Krekorian said. "And it would silence the public by limiting comments to only one possible set of maps—in direct contravention of the commission's own outreach plan."

Krekorian said he was "confident" the city council would reject the draft map when it came time to give final approval.

Redistricting Commission Chair Fred Ali said in a statement to KNX that the draft map was based on 2020 census data, and was "guided and driven" by ensuring "fair and inclusive representation" for the people of L.A.

Toward developing the map, Ali said the commission was only interested in taking into consideration testimony from impacted communities and federal voter protections—not "how it helps or hurts elected officials."

"This is the first time in the history of the City of Los Angeles that we have drawn maps in a public forum," Ali said. "This is an ongoing process with four public hearings in which the public can make comments about the current version of the map, and we will take those comments into consideration as we draft a final map that will be delivered to the City Council for consideration."

The commission will hold the first of four meetings Wednesday evening to present the public with a draft of the map. The meetings are scheduled as follows: