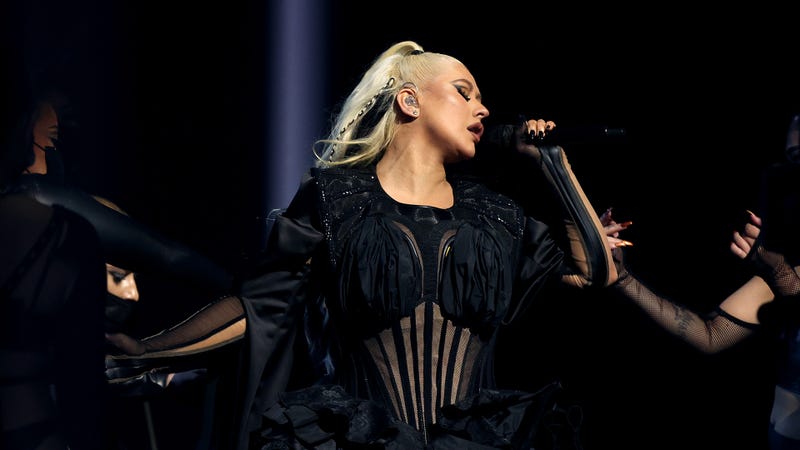 It's always a good time when we get to hear a massive Pop hit in a new light... and we'll never turn down a performance from any of the genre's royalty.

Listen to your favorite music now on Audacy and check out our all-new exclusive stations curated for fans, by fans like Pop Recycled, Oh Baby Baby, ICONS, and more!

Xtina opened up her career-spanning set with a heavy-hitting version of her 1999 smash "Genie in a Bottle," complete with thundering drums, sweeping strings, and ALL of the dramatic smoke & mirrors.

While changing up her outfits no less than three times during her show, Christina also sang clips from 2002's "Dirrty," 2006's “Ain’t No Other Man,” and 2002's “Fighter,” before switching up the tempo with her new song, "Somos Nada," from her upcoming Spanish-language album Pa Mis Muchachas. Aguilera then closed out the performance with her 2002 tracks "Can't Hold Us Down," and the massive power ballad, “Beautiful.”

Christina’s recent "Pa Mis Muchachas" collaborator, singer Becky G, was on hand to present the 2021 Music Icon Award following her set. In her speech, Aguilera said that she has always strived for her music to “communicate messages of empowerment, whether it's speaking my own truths or giving voice to those unable to do so on their own." Adding, "my artistry has always been for the fighters in this world, for those who face adversity, for those wanting to evoke change, my music is for you."

"Believing in yourself is often the biggest obstacle of all,” Christina continued, “and throughout the years I've heard your stories about the impact of songs like 'Beautiful,' 'Fighter,' 'Can't Hold Us Down,' and yes, even 'Dirrty.' Thank you for your stories," she said. "Thank you for listening. And thank you for fighting. You inspire me every day." Aguilera was also sure to thank her fiancé, Matthew Rutler, "for dealing with all of this always," and her children Max, and Summer, "my true icons, my angels, my babies... I love you."