Wake up to BOB and TOM mornings on KFH !
By John Healy, Audacy

DeAndre Hopkins’ six-game PED suspension to start the 2022 season could have a lasting impact on his legacy, particularly the Hall of Fame.

“He’ll still be a Hall of Famer,” Fitzgerald told TMZ Sports over the weekend. “He’ll work through it. It’s just some adversity and, you know, he’s a tough guy, resourceful, and he’ll work his way through it.”

Hopkins released a statement following news of the suspension that he was “confused and shocked” to learn he tested positive for a banned substance and apologized that he was not careful enough about what he was putting into his body.

The 29-year-old receiver is a four-time Pro Bowler and three-time All-Pro and despite having a down season in 2021, his absence will be felt by the Cardinals.

Fitzgerald believes his former team will be able to weather the storm, though, pointing to the recent trade of Marquise “Hollywood” Brown.

“They made the trade for Hollywood, so they got some talented youngsters going into their second year, Zach Ertz, they have some talented guys around them,” Fitzgerald said. “…the hard wins are in the back end of the schedule, so that’s what I’m praying for.” 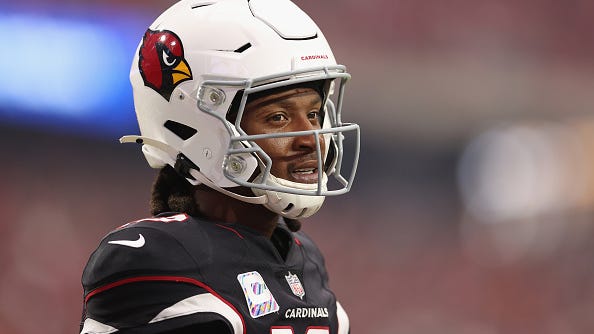