When the Blue Jays signed Roger Clemens to a four-year/$40 million deal ahead of the 1997 season, Toronto hoped that "The Rocket" would help them to return to the relevance that allowed them to win back-to-back World Series titles earlier in the decade.

That didn't happen, but it was far from Clemens' fault.

Unfortunately for the Blue Jays, Clemens' dominance didn't translate to team success. The Blue Jays went just 76-86 in 1997, finishing dead last in the American League East. In 1998, they improved to 88-74, but that was still 26 games behind the New York Yankees, who won a staggering 114 games. It was four games back of the division-rival Boston Red Sox -- Clemens' former team -- as well, and in the era of just one Wild Card spot in each league, the Blue Jays were left out of the playoffs. 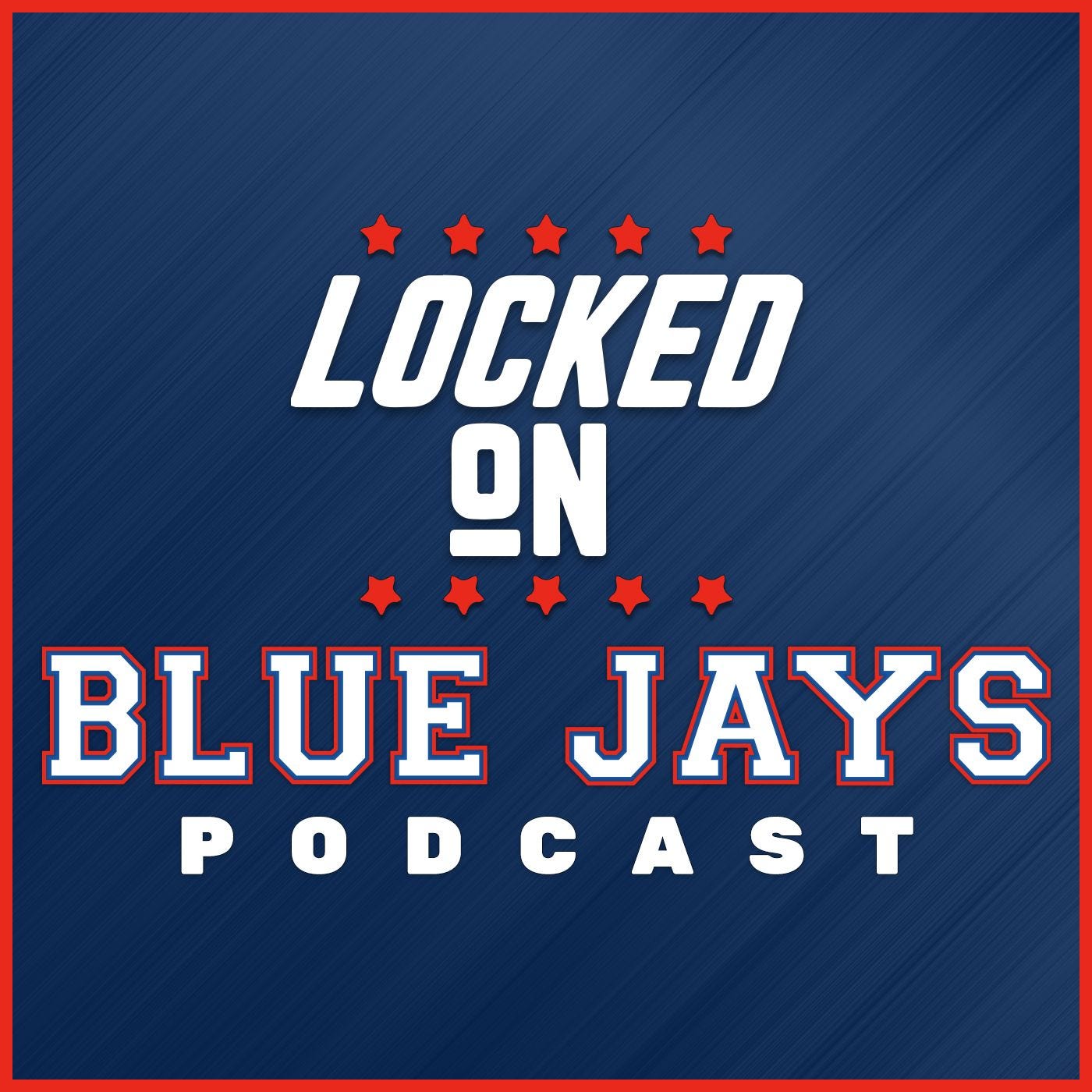 After rediscovering the dominance that he had shown in his first nine seasons in Boston -- probably with the assistance of performance-enhancing drugs -- Clemens demanded a trade. As Richard Justice reminds us in a story published at The Washington Post at the time, the Yankees edged out the Houston Astros and Texas Rangers to acquire Clemens before the 1999 campaign. He would spend the next five seasons in New York, marking his first of two stints with the Bronx Bombers. During those five seasons, the Yankees reached the World Series four times, winning it twice.

For the Blue Jays, you're left to wonder what could have been if they were able to build a contending team around Clemens, who remained one of the game's elite pitchers into his early-40s. If Clemens had simply just played out the four years on his initial contract in Toronto, he almost certainly would have cracked this list.

But even with how dominant he was, Clemens spent just two years with the Blue Jays. So, absent Clemens, here is a countdown of the nine greatest players in Blue Jays history: 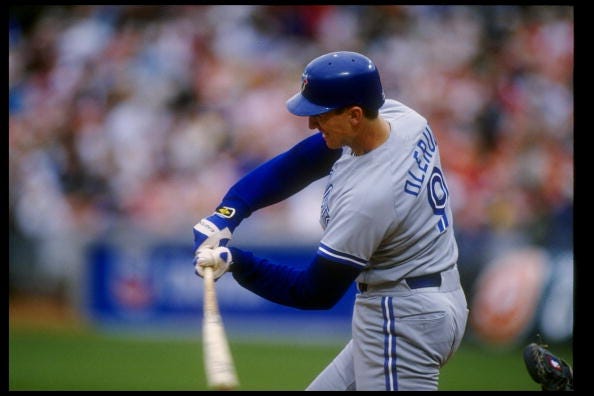 Olerud wearing a helmet while he played first base is one of the most distinct looks like baseball history. But the reason he hung around the majors for 17 years and became so synonymous with wearing the helmet is because he was a hell of a hitter. Olerud spent parts of eight seasons in Toronto, and was a key cog as the team won their first two championships in 1992 and 1993. In 1993, Olerud led the American League in batting average, on-base percentage, OPS, OPS+ and doubles. He finished third in American League MVP voting that year, behind two future Hall of Famers in Frank Thomas and Paul Molitor. 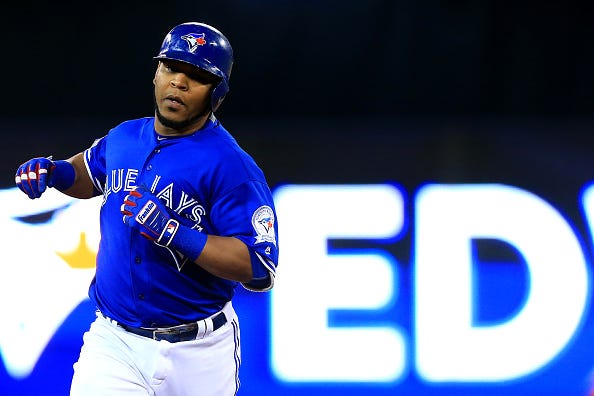 Complete with his imaginary parrot, Encarnación checks in at No. 8. In parts of eight seasons with the Blue Jays, Encarnación made three All-Star teams and hit more than half of his 424 career home runs. Encarnación's 239 home runs as a Blue Jay are third in franchise history, and he's sixth in RBIs with 679. Encarnación's walk-off home run in the 2016 Wild Card Game is one of the most notable round trippers in the history of the Blue Jays. 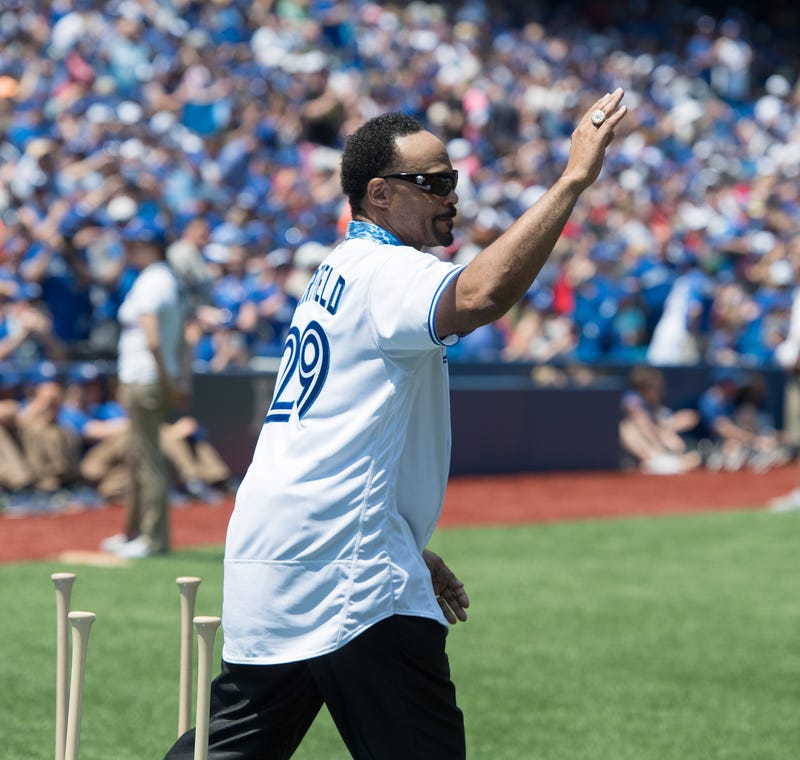 Barfield spent eight-and-a-half seasons with the Blue Jays, winning two Gold Glove Awards and making an All-Star team. His best season came in 1986, when he edged out future Hall of Famer Mike Schmidt for the major league lead in home runs at 40. Barfield finished fifth in American League MVP voting in 1986, one spot behind teammate George Bell and four spots behind the aforementioned Clemens, who won the award. 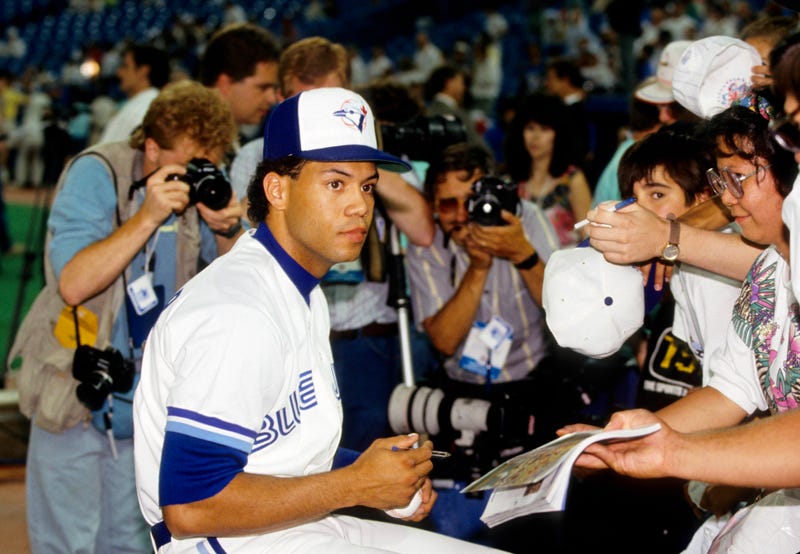 Alomar only spent five seasons in Toronto, but he went into the Hall of Fame with a Blue Jays cap, making him the first player in Cooperstown as a member of the franchise. Alomar -- who helped Toronto win back-to-back World Series titles in 1992 and 1993 -- had his No. 12 retired by the franchise in July of 2011. 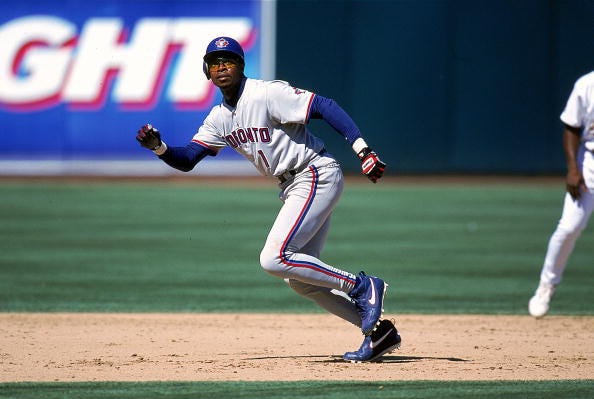 It took him four separate stints in Toronto, but Fernández's name is all over the Blue Jays record book. Having made four All-Star teams as a Blue Jay, Fernández is the all-time franchise leader in hits, singles and triples. He also finds himself in the top five in terms of doubles, total bases and stolen bases in Blue Jays history. 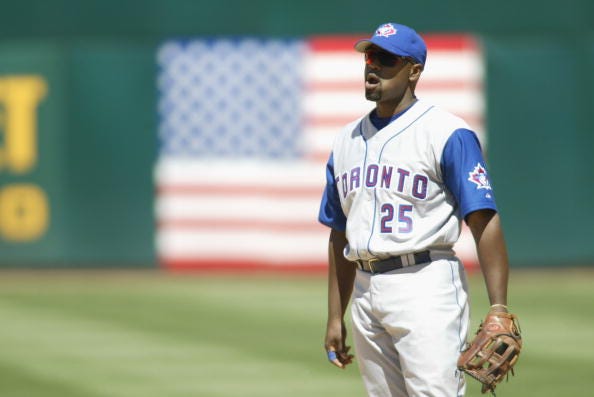 Delgado had some very productive seasons in Miami and Queens, but his peak came during the parts of 12 seasons that he donned a maple leaf on his cap for. Between 1996 and 2004, Delgado finished in the top eight in both home runs and RBIs, despite being clean in an era where many other players seemingly weren't. With one of the sweetest swings baseball has seen, Delgado homered four times in a game against the Tampa Bay Devil Rays on Sept. 25, 2003. He's the only player in Blue Jays history to hit four home runs in a single game, and one of just six in the history of the American League. 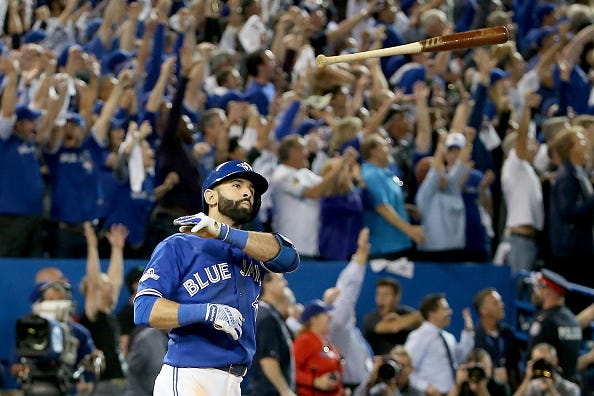 Bautista was a late bloomer, but when he finally bloomed, boy was he fun to watch. "Joey Bats" led baseball in home runs in both 2010 and 2011. Between 2010 and 2015, Bautista's 227 home runs were the most in baseball, with no one else even reaching 200 over that period. And while Joe Carter's walk-off home run to win the 1993 World Series is the most famous in Blue Jays history, Bautista's go-ahead home run (and subsequent bat flip) in Game 5 of the 2015 ALDS is probably the most talked about blast of the last decade. 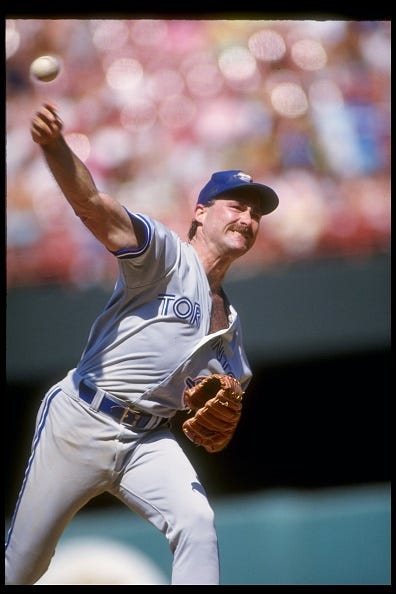 While not the most dominant pitcher in Blue Jays history, Stieb is certainly on the inner circle of starting pitchers in franchise history. Across 15 years in Toronto, Stieb led baseball in ERA, ERA+, innings pitched, complete games and complete-game shutouts on at least one occasion. Stieb is the all-time franchise leader in wins, innings pitched, strikeouts, games started, complete games and complete-game shutouts. 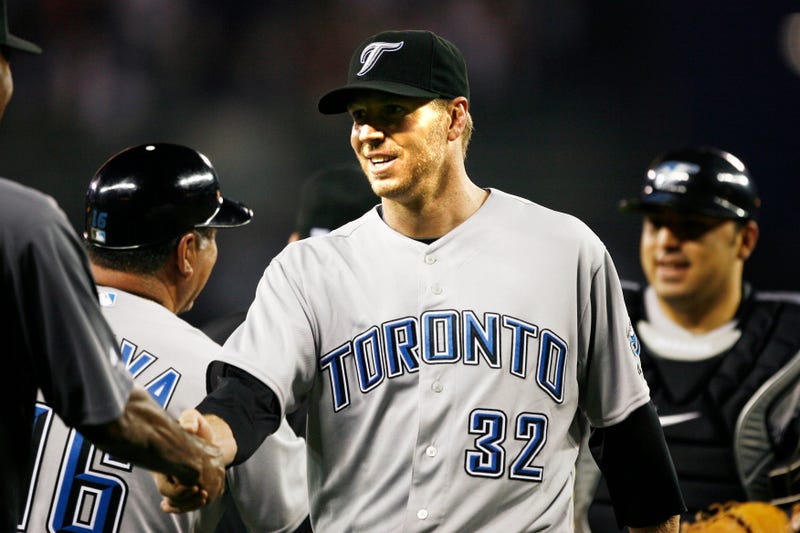 Halladay was the perfect mix of being dominant and a workhorse. In 12 seasons with the Blue Jays, Halladay finished in the top five in American League Cy Young Award voting on five occasions, winning the award in 2003. He also led the junior circuit in complete games five times. The most memorable moments of Halladay's career may have come during his four seasons with the Philadelphia Phillies -- which is partially why his Hall of Fame plaque has a blank cap -- but the overwhelming majority of his production came in Toronto. The Blue Jays retired Doc's No. 32 in March of 2018, less than six months after his tragic passing. 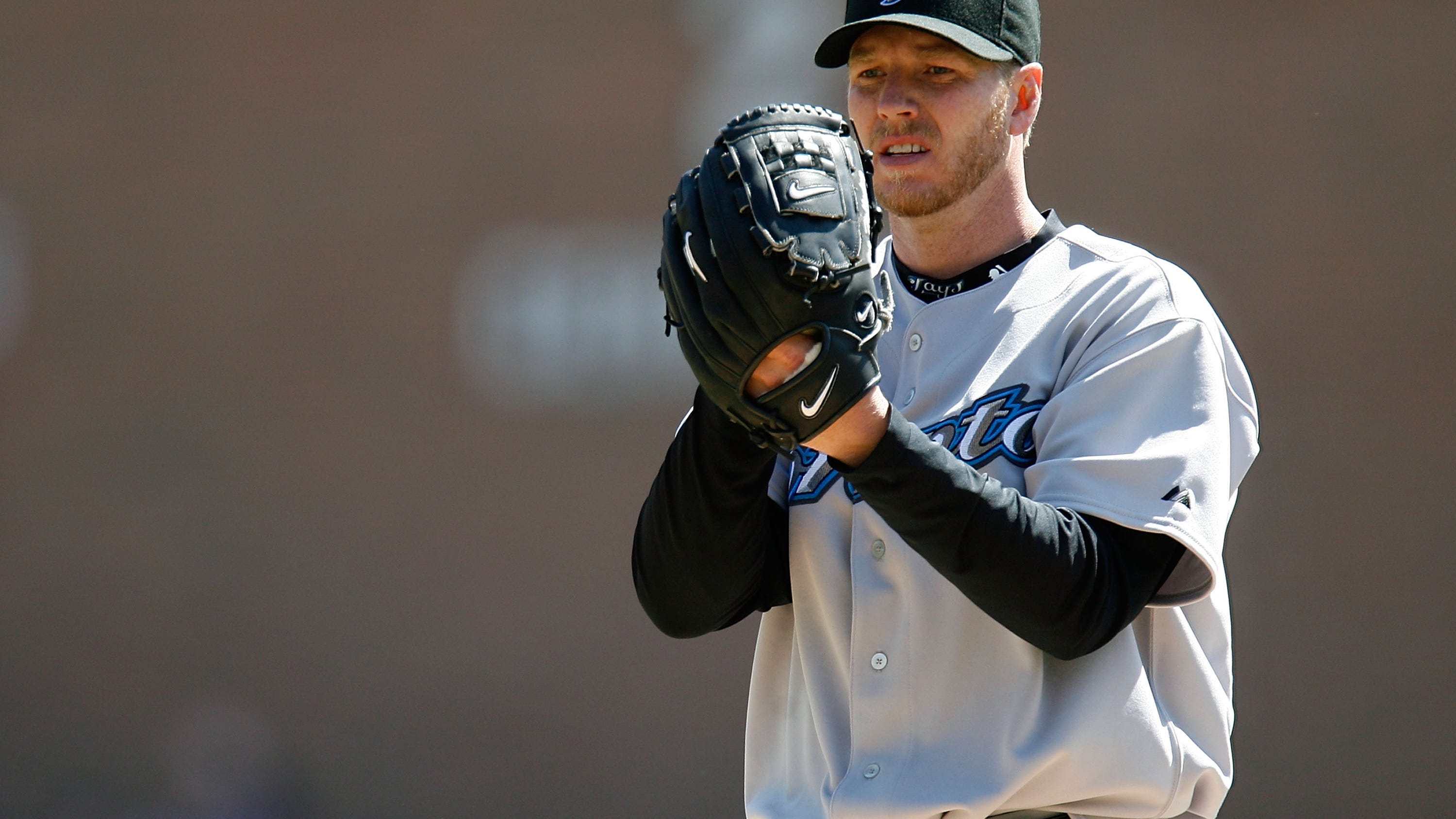