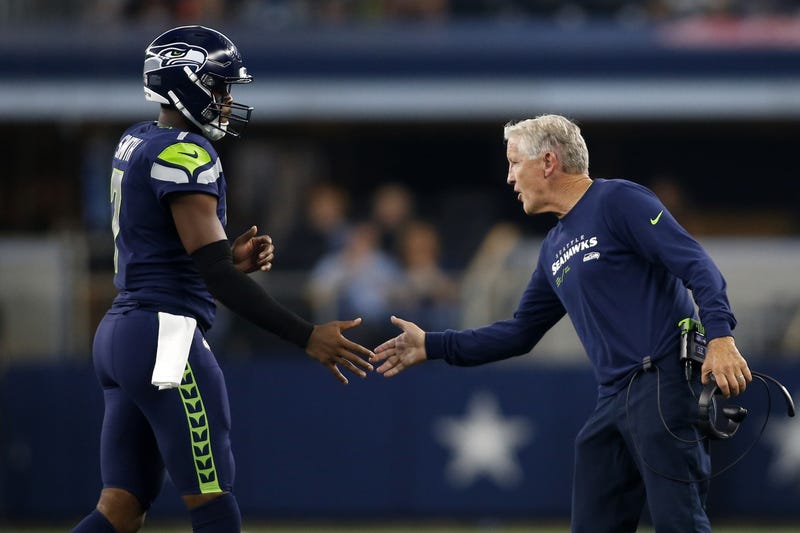 Ayo 12s!
The preseason is in the books, and the Seahawks will be finalizing their 53-man roster within the next day. One thing we know for sure, it's who'll be under center to start out the season, Geno Smith.
I admit that I was rooting heavily for Drew Lock in this fight, but after seeing the game on Friday, I can say that I agree with Pete's decision. With the qualifier that Drew was literally days off of COVID before stepping up to the plate for his final chance to win the job, he just looked stiff. He stood a little too still in the pocket, which may work with a more secure offensive line, but that's not what we're dealing with right now. He also made a handful of questionable decisions out on the field that may have changed the game. Not to say he did a poor job, I wouldn't be shocked if he starts a game or two somewhere down the line this season, but I'm interested to see how Geno fits with the complete arsenal, and when the points do matter.

Now, I may have dogged on the O-line already, but as far as what we've seen in the past, it's looking really really good this season! They've held the pocket decently well and they've opened up the run game opportunities better than we've had in years. On top of that, I notice there's a distinct difference in play calling this season so far, which leads to the question about the power struggle that was going on between Pete and Russell. Pete always wanted to boost the run game, meanwhile Russ always wanted to get airborne. This leads to both parties frustrated, and the team suffers as a whole. Now it seems like there's a lot more synergy about the team and things are coming together a lot smoother. That goes double for the defense. I really love the depth that we have coming out on defense this year. The rookies that have come in have been really impressive, along with the standing stars and the new scheme, it's all coming together very well. Would love more interceptions though, we're close, but not quite 100%

ANOTHER 4TH DOWN STOP!

This preseason has been a bit clunky, especially if we're erasing the game against the Bears last week, which seems like more of a fluke now, but that's preseason. These guys are fighting for a job, but how much does that take away from the overall team connection? How many guys are trying to look like superstars as opposed to a part of the team as a whole? When we get into week 1, it's going to be shaky. It's the first time we'll see the new face of the Seahawks, but there's something different about this squad. There's a lot of good names and a lot of heart that has a desire to succeed on this team, whereas in years past it seemed like it was just an annual routine to get together and play ball. I don't know what this team will look like 2 months from now, but I get the feeling they'll be playing more competitive and compelling football than we gave them credit for after trading Russell away. If they show up every week like they did in preseason weeks 1 and 3, I'll be happy with this team's direction. Hang with me 12s! We're in for an interesting season! I'll be back next week to get us hyped for the Monday Night Opener! With that...Mike Hawk is OUT!