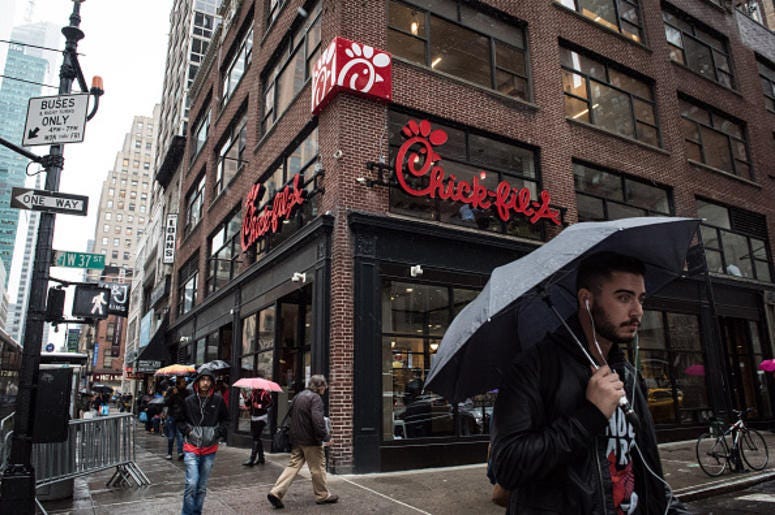 The Chick-Fil-A mascot is apparently a big fan of the movie ‘Twister’ from the 90’s. An inflatable Chick-Fil-A cow recently got sent flying through the air thanks to storm winds. Many on social media have pointed out the video captured is reminiscent of the famous scene from ‘Twister’ where a cow flies through the sky due to a tornado.

A strong storm blew through Montgomery, Alabama over the weekend, with strong winds causing damages to power lines and trees. It also took the Chick-Fil-A inflatable mascot for a ride, as strong winds sent the inflatable cow flying through the air. According to the woman who captured the footage, the cow hit a few cars, but didn’t seem to cause any damage.

Many have pointed out that the footage is quite similar to the famous scene from ‘Twister’, including Savannah Wallace, who posted the video with the caption, “flying cows do exist!” Luckily the flying cow didn’t do much damage, though Chick-Fil-A has been known to handle store damage with humor in the past.

A car drove thru one of the @ChickfilA’s in my hometown and they’re really handling it in the best way possible. 😂 📸: @accfire pic.twitter.com/9Rpj35D1P3

Whether it’s a storm or a reckless driver, Chick-Fil-A continues to provide chicken for their customers. Even a flying inflatable cow won’t prevent them from convincing people to “eat mor chikin.”