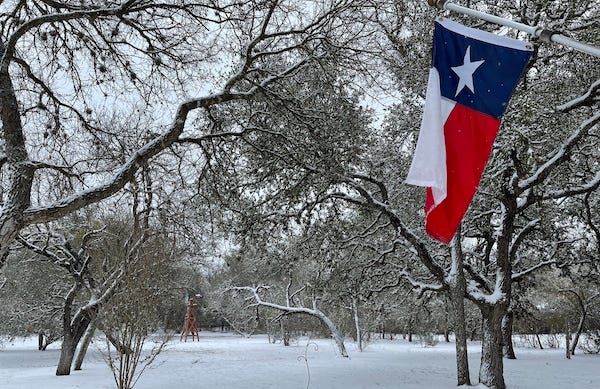 It’s probably safe to say that we’re all over the extreme summer heat and are counting down the days until the temperature drops and we can all safely return outside again.

Unfortunately as the saying goes, “the bigger they are, the harder they fall,” so as hot as this summer has been, we can safely expect for winter to be just as brutal.

The Farmer’s Almanac is predicting “another season of harsh weather” come wintertime for Texas this year, echoing the winter storms the Lone Star State experienced the past couple of Februarys.

Editor Peter Geiger told Texas Monthly, “It’s ironic because the day we released the forecast was probably the hottest day of the year for some.  We think it’s important to share earlier because, at least where I am, fuel costs have gone through the roof, and we want people to be ready and prepared for whatever’s coming their way during the winter months.”

According to this year’s Farmer’s Almanac forecast, which is accurate about 85% of the time, Texas is in “store for a ‘chilly’ winter with ‘normal precipitation,’ with North Texas seeing the most potential for snow and ice storms throughout the season.”

It’s also predicting “heavy snowfall the first week of January that is expected to reach North Texas, followed by “significant snows” for North and Central Texas the second week.”

Are we in for extreme winter weather this year?

Let's consult the 204-year-old Farmers' Almanac, which claims it gets things right “about 85% of the time” and has released its winter forecast for the 2022–23 season earlier than ever.https://t.co/fCvi4EV32N

Interestingly enough, the Almanac did predict heavy snow for much of Texas in February 2021, but it didn’t predict the exact timeframe.

Geiger continued saying, “There are at least four or five really cold snaps that we’re expecting to see in Texas.  Looks like there could be a shot of winter in November, toward the end of December, and then January looks like a fairly cold month in particular, with February decidedly colder.”