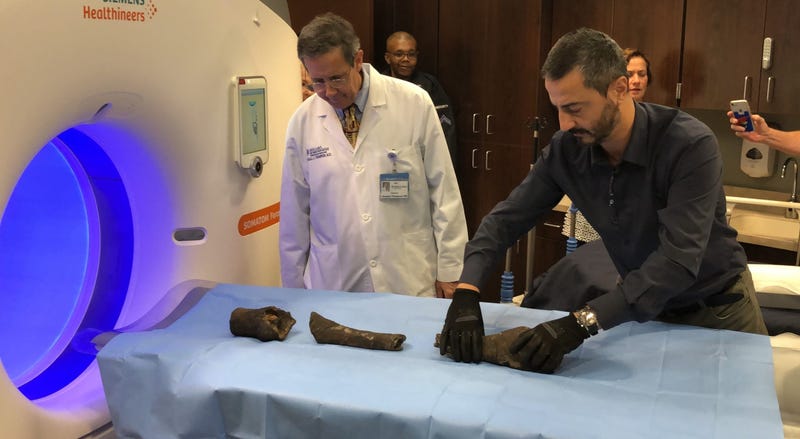 Kansas City, MO - She was known as The One for Whom the Sun Shines.  Queen Nefertari (not to be confused with Nefertiti) is one of the most celebrated female rulers in Ancient Egypt.  Right up there with Hatshepsut, Nefertiti and Cleopatra, according to Egyptologists.

And part of her is now in Kansas City.

The traveling exhibit includes Nefertari's burial chamber, along with other ancient Egyptian artifacts on loan from an Italian museum.

And the items include partial fragments of Nefertari's legs.

We are witnessing history this morning at @saintlukeskc.

For the first time ever, the mummified remains of Egyptian Queen Nefertari are undergoing a CT scan. Nefertari was the wife of Ramesses II, who ruled from 1279-1213 BC.

What doctors and historians hope to learn on @kmbc pic.twitter.com/3PwvSFDYfJ

The mummified legs were found when the tomb was 'discovered' in 1904 and were assumed to be Nefertari's.  Only recently have researchers run tests to focus in on the likelihood they did indeed belong to the Great Royal Wife of Ramesses II.

As part of the research into the life and death of Nefertari some 3,000-plus years ago, the leg fragments were run through a CT scan at St. Luke's Hospital in Kansas City.

Dr. Randall Thompson, a cardiologist at Saint Luke's, has scanned mummified remains before.

"One of the main things we're looking for is if there's any arterial disease in the leg," Thompson said. "It's amazing. If there's calcium in the arteries, it lays down, and 3,000 years later you can still see it in a CT scan."

"You can look across the ages and determine health and disease," he said.

Nefertari is believed to have died around 1250 BCE, and was between 40 to 50 years old at the time of her death.

The tomb of Nefertari, cataloged as QV66, is one of the largest, and is considered to be one of the most spectacular, tombs in the Valley of the Queens in Egypt.