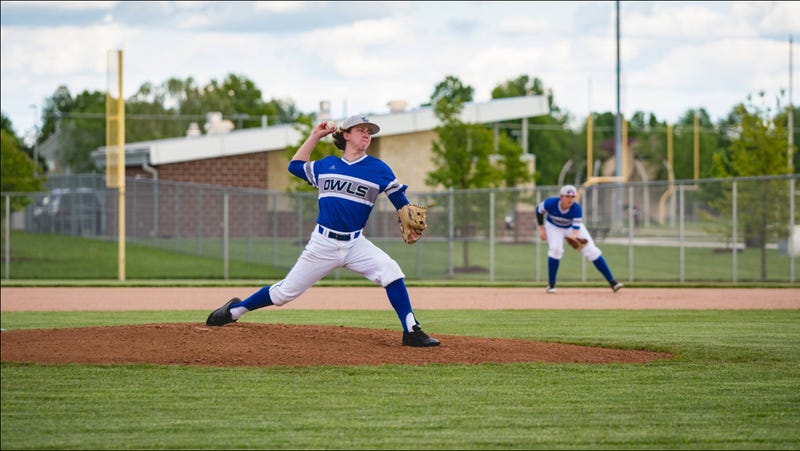 Olathe, KS - It was May 6th of this last year. Brennan Connell was varsity pitcher for Olathe West High School. Brian Connell, Brennan's father, says his son was the starting pitcher, playing against Blue Valley Southwest.  It was a hot and muggy day, but Brennan felt perfectly fine as he continued to pitch a winning game.

He stepped up to throw a pitch, and that's when Brennan collapsed on the mound. Mom, Kristin was recording him on the first base side. "When he didn't move, I thought maybe he just passed out. I never thought about it being something else," explains Kristin.

All signs pointed to a sudden cardiac arrest, and within seconds he was surrounded by medical professionals, an automated external defibrillator was on sight, and action was taken immediately.

Brian says all he could do was hold his son's head in his hands saying, "You're safe, we're here, come back to us." He says he was talking to his soul to bring him back, because he knew he was there.

The AED shock was able get his heart pumpping again, and he was rushed to the hospital. Brennan was touch and go in the hospital for a week, then doctors found an electrical challenge in the AV node of his heart. Doctors say it was unrelated to his SCA, but correcting it stabilized Brennan.

He's been stable ever since, making an amazing turnaround in the last 90 days. This next week he's expected to be released to go back to all competitive sports. His parents say they're nervous, but have to let their son go back to doing what he loves.

Brian says less than 10% of SCA victims survive, attributing his son's survival to the quick action of the bystanders that treated him. The Connell family is hosting an event Saturday, August 3rd to train people on hands only CPR and on the use of an AED machine. Kristin says bystanders are the most important bridge between life and death for a SCA victim.

We want to see YOU on Saturday, August 3, for our 1st event "Team Up With BC20 to Strike Out SCA!" We've teamed up w/ @OlatheFire @ATSHeartCheck @OlatheWestOwls @ADButlerOW to provide Hands-Only CPR/AED training + Youth Heart Screenings: https://t.co/Tpf5dHxdoH! ❤️ #strikeoutSCA

"In our case, it was miracle upon miracle that the right people were there and they knew to do the right things," explains Kristin.

Brian says statistically, one in three-hundred students are walking the halls of their school with a hidden heart condition that a sports physical won't detect, but there is a test that will. He says all it takes is an echo along with a board certified pediatric cardiologist review. At the event, 56 students are receiving that comprehensive heart screening. The Connell family hopes to hold many more in the future.

If you'd like to learn these life saving techniques, the event is from 9-3 at Olathe West High School. The event is come and go and each session lasts 15-20 minutes. Kristin has established a website with information all about Sudden Cardiac Arrest and where you can find future events.