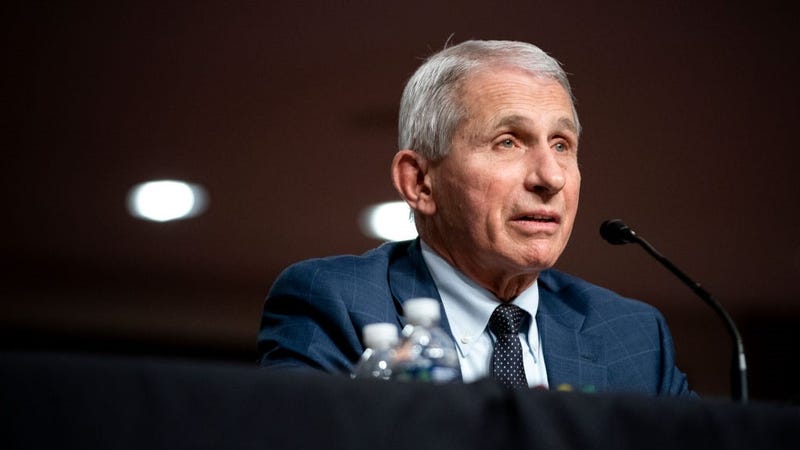 Dr. Anthony Fauci was caught on a hot mic Tuesday calling Sen. Roger Marshall (R-Kan.) "a moron" during his testimony at the Senate Health Committee meeting.

The White House chief medical advisor whispered the phrases "what a moron" and "Jesus Christ" in response to Marshall questioning his personal finances.

It was clear that Fauci was frustrated during the questioning. Fauci called Marshall "misinformed" at the end for alleging him of not disclosing important financial information.

Since Fauci is a public official, his financial disclosure information is available to view via a Freedom of Information Act request. However, Marshall said his staff could not find the records.

Instead, he pointed to Fauci's reported salary of $400,000, which would make him the highest paid government employee.

This led to a heated back and forth between the two, as Fauci interrupted Marshall to say his information is "amazingly wrong."

"This is a huge issue," Marshall said. "Wouldn't you agree with me that you see things before members of Congress would see them so there is an air of appearance that there are some shenanigans going on. I assume that's not the case."

"What are you talking about?" Fauci said. "My financial disclosures are public knowledge and have been so. You have amazingly wrong information."

The hearing was focused on the surge of cases throughout the United States caused by the omicron variant.

Marshall said in a statement that Fauci "had a very frustrating day" after being questioned about the COVID-19 pandemic.

"I understand that Anthony Fauci had a very frustrating day: having a bombshell report show he in fact did award U.S. tax dollars for gain-of-function research at the Wuhan Institute of Virology and being called out about his personal financial disclosure during the COVID pandemic NOT being publicly available must be very frustrating," Marshall said.

"Calling me a moron during a Senate hearing may have alleviated the stress of the least trusted bureaucrat in America, but it didn’t take away from the facts."

Marshall said during the hearing that Fauci isn't trusted by the American people.

"Every day you appear on TV, you do more damage than good when it comes to educating the public on COVID," Marshall said.

"If you look at everything I have said on TV, it is to validate, encourage and get people to abide by the recommendations of the Centers for Disease Control and Prevention," Fauci said.