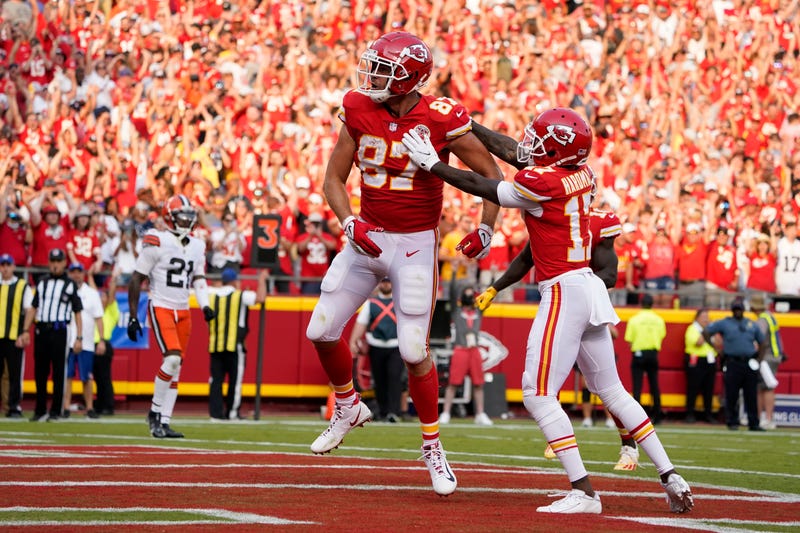 KANSAS CITY, Mo. (AP) — Every time the Kansas City Chiefs needed a big play on Sunday, their magician under center produced the kind of mesmerizing moment that left the Cleveland Browns shaking their heads in awe and frustration.

There was Patrick Mahomes' 75-yard touchdown pass to Tyreek Hill, where he lofted the ball deep downfield and his wide receiver made an incredible adjustment. The crucial throws that kept drives alive.

And ultimately, the touchdown pass to Travis Kelce that completed a comeback from a 12-point hole and gave Kansas City a 33-29 victory Sunday.

On the field, Mahomes finished with 337 yards passing and three touchdowns while running for a score. On the sideline, he helped to instill the confidence in a struggling Kansas City defense that it could make plays when it mattered down the stretch.

“You love his attitude because he always feels like we're in it,” Chiefs coach Andy Reid said. “He does such a great job with the guys around him. He's a great communicator during tough times on the sideline.”

There were plenty of those on Sunday.

Yet the Chiefs still managed to win their fifth straight against Cleveland, including a 22-17 playoff win in January, and their 15th consecutive game in September. They also pushed Andy Reid within one win of reaching 100 with two franchises.

Mahomes had plenty of help: Hill finished with 11 catches for 197 yards and that momentum-shifting touchdown, and Kelce had a pair of touchdown catches, including the go-ahead score with 7:02 remaining in the game.

As for the Browns? They fell to 1-21-1 in season openers since returning to Cleveland in 1999, extending their NFL mark to 17 consecutive defeats. They haven't won an opener on the road since the 1994 season.

“It's tough, right? But at the same time, we constantly get reminded this is a team game in all phases,” said Baker Mayfield, who threw for 321 yards but was picked off by Mike Hughes with 1:09 left to end any hopes of a comeback.

“You have to play together, good complementary football,” Mayfield said, “and if you don't do that and there's still time on the clock, there's a chance you get beat. Unfortunately, we've been on the wrong side of that.”

Nick Chubb ran for 83 yards and two scores while Kareem Hunt and Jarvis Landry also had TD runs for the Browns.

The game was a rematch of a physical, defensive-minded playoff game that Kansas City clinched when backup quarterback Chad Henne threw a fourth-down pass to Hill for a first down with just over a minute to go.

There wasn't a whole lot of defense this time.

The Browns twice converted fourth downs in the Chiefs' red zone to keep first-half scoring drives alive. Chubb ended the first with his first TD run, and Landry scored on fourth down on the second, before Chubb tacked on an 18-yard run through a gaping hole in the rebuilt Chiefs defensive line to make it 22-10 at halftime.

The Chiefs finally found some offensive balance in the second half, riding Clyde Edwards-Helaire down the field before Mahomes hit Kelce for a touchdown. That capped a drive that took up half the third quarter and, most importantly for the lackluster Kansas City defense, kept Mayfield and the rest of the Browns offense off the field.

The Chiefs nearly ground out the rest of the quarter by turning Chubb's fumble into Harrison Butker's second field goal.

When the Browns weren't beating themselves, the Chiefs weren't doing a whole lot to stop them. Kevin Stefanski's bunch immediately responded with a seven-play, 75-yard drive — their fourth scoring drive at least that long — that former Chiefs running back Hunt finished off to make it 29-20 with 10:24 to go.

But the Browns weren't done beating themselves, either.

First, they blew coverage on Hill near midfield, and he merely had to cradle a pop-up pass from Mahomes and take off for a 75-yard touchdown reception. Then, after the Chiefs finally forced a three-and-out, Browns punter Jamie Gillan inexplicably dropped the snap and the AFC champs took possession at the Cleveland 15.