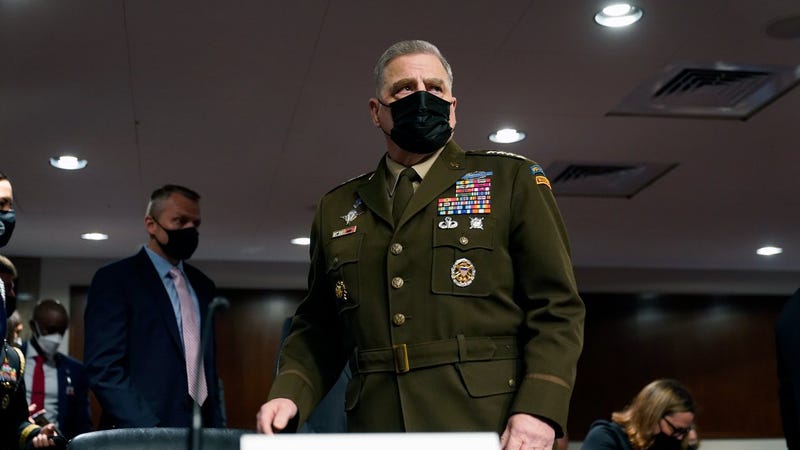 Chairman of the Joint Chiefs of Staff Gen. Mark Milley arrives before a Senate Armed Services Committee hearing on the conclusion of military operations in Afghanistan and plans for future counterterrorism operations, Tuesday, Sept. 28, 2021, on Capitol Hill in Washington. Photo credit AP Photo/Patrick Semansky, Pool
By The Associated Press

The top U.S. military officer told Congress on Tuesday that he knew former President Donald Trump wasn't planning to attack China and that it was his job to reassure the Chinese of that fact in phone calls that have triggered outrage from some lawmakers.

Army Gen. Mark Milley, chairman of the Joint Chiefs of Staff, delivered a full-throated defense of two calls he made to his Chinese counterpart, saying he was responding to “concerning intelligence” that China was worried about a U.S. attack.

“I know, I am certain, that President Trump did not intend to attack the Chinese and it was my directed responsibility to convey presidential orders and intent,” Milley told the Senate Armed Services Committee on Tuesday. “My task at that time was to de-escalate. My message again was consistent: Stay calm, steady, and de-escalate. We are not going to attack you.”

Milley has been at the center of a firestorm amid reports he made two calls to Gen. Li Zuocheng of the People’s Liberation Army to assure him that the United States was not going to suddenly go to war with or attack China. Details of the calls were first aired in excerpts from the recently released book “Peril” by Washington Post journalists Bob Woodward and Robert Costa.

Some U.S. lawmakers have said Milley overstepped his authority, and they have called for President Joe Biden to fire him. Trump blasted Milley as treasonous, called him “a complete nutjob” and said Milley “never told me about calls being made to China.”