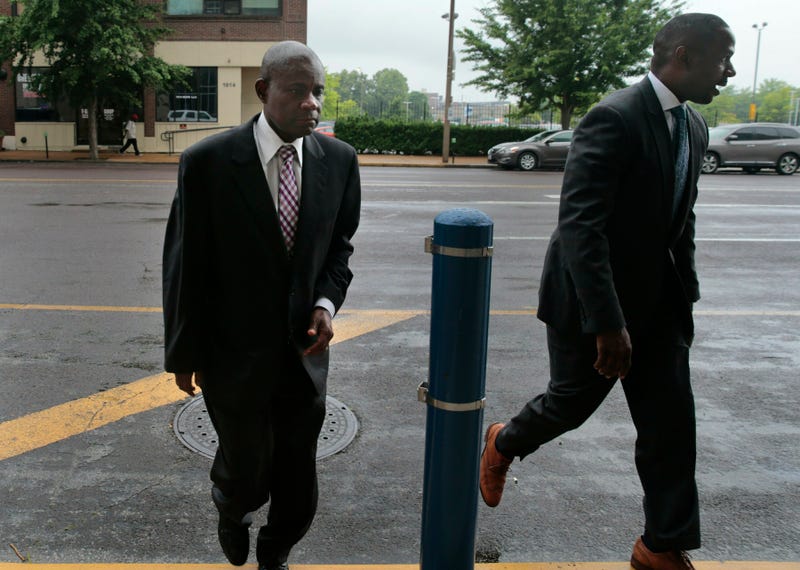 Photo credit Former FBI agent William Don Tisaby, left, is accompanied by attorney Jermaine Wooten as he turns himself in at St. Louis Police headquarters on Monday, June 17, 2019, in St Louis. Tisaby has been charged in a perjury investigation related to the prosecution of former Missouri Gov. Eric Greitens. (Robert Cohen/St. Louis Post-Dispatch via AP)
By NewsRadio 1120 KMOX

ST. LOUIS (AP) — Some black activists in St. Louis say there's an unfair racial component to criticism of St. Louis Circuit Attorney Kim Gardner over her hiring of a man who led the investigation of former Missouri Gov. Eric Greitens and who now faces perjury charges.

About a dozen black activists gathered Tuesday outside of a downtown courthouse to defend Gardner and the investigator, William Tisaby, who are both black. Tisaby faces six counts of perjury and one count of tampering with evidence stemming from his investigation of Greitens.

"The bottom line is this whole episode is racism," said Zaki Baruti, who heads the St. Louis-based Universal African Peoples Organization. He said the black community needs "someone who's in our interest and Kim Gardner is that person, and we are not going to allow her to be treated as she's being treated."

Gardner, a Democrat, was elected in November 2016 after campaigning to rebuild trust in the criminal justice system at a time when the St. Louis area was still healing from the events in nearby Ferguson, where a white police officer shot and killed an unarmed black teenager, Michael Brown, two years earlier.

She has been at odds with the law enforcement establishment virtually since taking office.

Like many among the new wave of progressive urban prosecutors across the U.S., Gardner has moved away from prosecuting low-level drug crimes. She angered police leaders and the police union last year by creating an "exclusion list" made up of more than two dozen officers who she said were so lacking in credibility that they won't be permitted as primary witnesses in criminal cases.