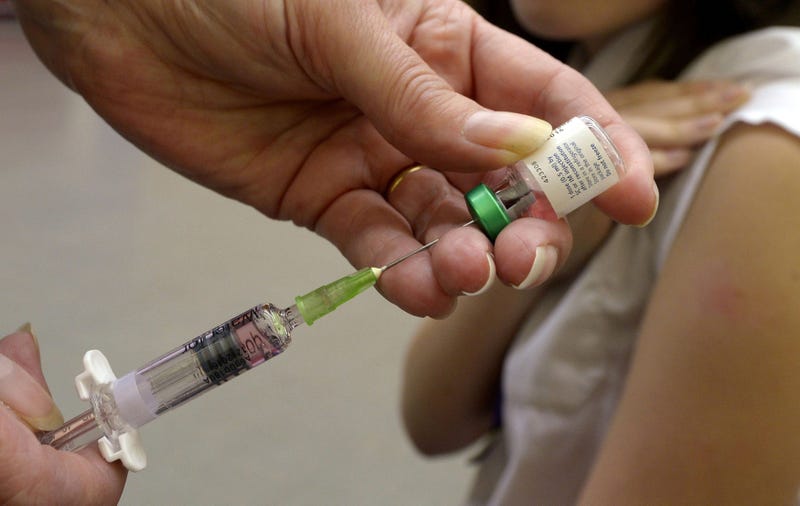 Photo credit 8/22/2018 - File photo dated 25/04/13 of a measles vaccination being administered. New university students should ensure they have been vaccinated against measles following outbreaks of the highly infectious illness, health officials have said. (Photo by PA Images/Sipa USA)
By Fred Bodimer, NewsRadio 1120 KMOX

ST. LOUIS, Mo. (KMOX) — A new push for the measles vaccine, as cases of the highly contagious virus grow in the Pacific Northwest.

"My concern is that enough people aren't immunizing their kids," says SLU Care's Dr. Ken Haller. "We might start getting to a point where we have a critical mass un-immunized children, so that if measles gets introduced into a community, that may be the spark to spread from one kid to another to another...and that may be the spark for measles to get re-established in the United States."

Dr. Haller, who is a pediatrician at SSM Health Cardinal Glennon Children's Hospital, says numerous studies have shown vaccines do not cause autism, which is a common reason cited by those who don't want their kids immunized.

He's among the many doctors that notes that measles may be the most highly contagious disease we know of.

"If someone in the room has it and sneezes, and it goes around the room, pretty much anyone in that room will pick up that virus and may get sick from it if they're susceptible to it. That's why vaccination is so important."

About four dozen people in Oregon and Washington have now been hit with the measles since the start of the year, along with more than 200 people within observant Jewish communities in New York.

A measles outbreak has U.S. public health officials urging vaccinations for children. Health officials say the outbreak is an example of why it’s critical to vaccinate against measles. https://t.co/iEFX7eCxeF