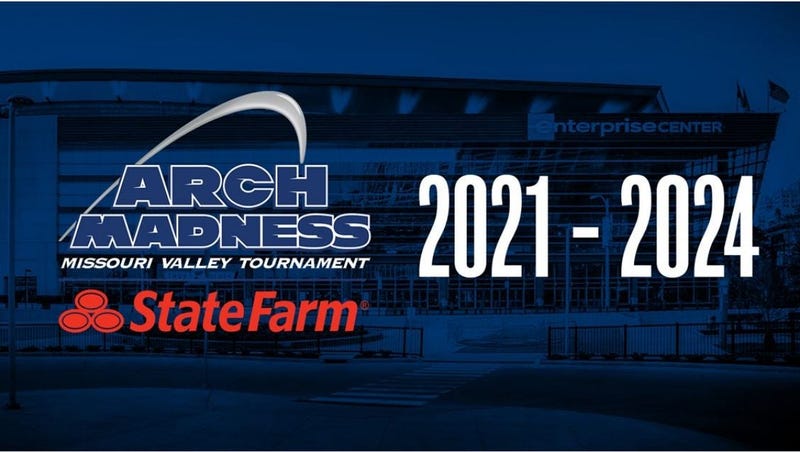 (KMOX ST. LOUIS) -- The State Farm Missouri Valley Conference Men’s Basketball Tournament will remain in St. Louis through at least 2024, MVC Commissioner Doug Elgin has announced. The existing agreement with the building concludes this coming March. The new agreement is for four tournaments in 2021 through 2024, with the MVC holding a one-year option for 2025.

“We’re elated to have had the opportunity to keep our basketball tournament here for such a long run,” said Commissioner Doug Elgin. “We owe the St. Louis Blues ownership a great debt by carving five consecutive dates out of the heart of the NHL schedule every March. Our State Farm MVC Tournament has established very deep roots in St. Louis, and this would never have been possible without the construction of Enterprise Center. And that has paid big dividends for the regional economy – our tournament has been a catalyst in providing the opportunity for The Valley and its local partners to collaborate in keeping St. Louis in the forefront among cities that are regularly awarded NCAA basketball events.”

“For 25-straight tournaments, we have had the privilege to call Enterprise Center our home court, and we are grateful that our fans will get to experience a fully renovated facility for years to come,” said Jack R. Watkins, MVC Associate Commissioner and Arch Madness Tournament Director. “Between the digital and video capabilities, the improved seating throughout the venue and the enhanced hospitality areas, Enterprise Center is second-to-none when it comes to providing a quality entertainment atmosphere.”

Only the Big East Conference has had a longer, continuously running men’s basketball event at the same neutral site than has the Missouri Valley Conference, which has built a strong tradition with the men’s basketball championship in St. Louis. The Big East Conference has played its tournament at Madison Square Garden in New York City every year since 1981 (41st consecutive year in 2020).

Other conferences that will celebrate current streaks of 20 or more years in the same neutral-site city in March 2020 include the Big West Conference (20 years in Anaheim, Calif.) and the Mid-American Conference (21 years in Cleveland). In 2019-20, the Missouri Valley Conference will have giveaways for fans at each tournament session and a year-long celebration of the league’s achievement through social media and on-campus activation.

Since the tourney moved to St. Louis in 1991, a total of 1,397,816 fans have passed through the turnstiles at Kiel Auditorium, the Saint Louis Arena and Enterprise Center to witness MVC tourney action.

During Elgin’s tenure (1988-present), The Valley has been aggressive in hosting NCAA events in St. Louis. From 1998-2010, the MVC served as host for a staggering nine NCAA tournament events in that 13-year period, which has made St. Louis one of the most frequent stops on the NCAA Tournament trail. The Valley hosted Women’s Final Fours in 2001 and 2009 -- both at Enterprise Center -- and the Men’s Final Four in 2005. Most recently, The Valley hosted a first- and second-round men’s basketball event in Enterprise Center in 2016.