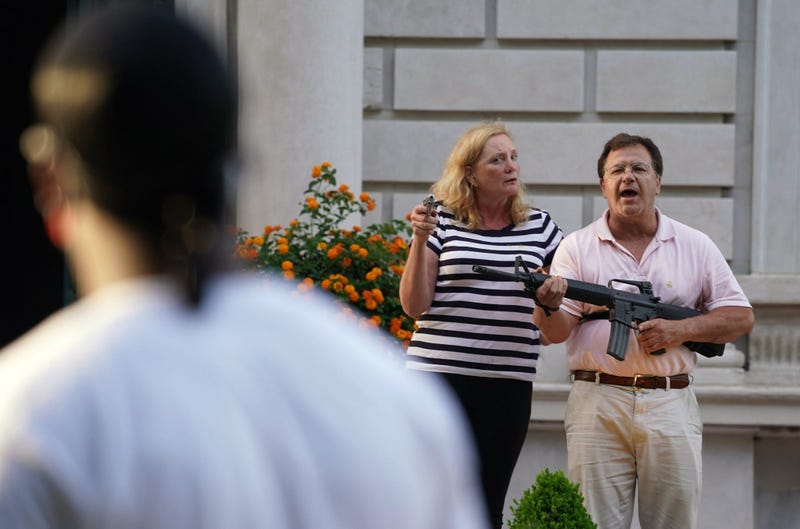 ST. LOUIS (KMOX) - The attorney representing Mark and Patricia McCloskey, the couple who pointed guns at protesters last month when they approached their Central West End Home, says he has turned over the handgun Patricia was holding to authorities.

Al Watkins tells KMOX, he took the weapon after the incident to maintain the integrity of evidence. Friday night, St. Louis Police executed a search warrant and took the rifle. Watkins handed the handgun to police Saturday afternoon.

Watkins was asked if Circuit Attorney Kim Gardner is looking to prosecute the couple. "I believe very strongly," Watkins says, "that the motivation of the circuit attorney in this case is one that is directly tied toward, and to, a desire to discharge her duties for re-election purposes versus for purposes consistent to her obligation"

Watkins says he believes Gardner could be considering charging the McCloskeys with unlawful use of a weapon charges. He contends Patricia's handgun was inoperable, so the charge would not apply. "One of the elements of that crime is that the person charged with the crime had to be using a weapon that was readily capable of grave bodily harm," he says.

Watkins says he can no longer represent the McCloskey's in any criminal action with this case, since he had the possession of handgun, making him a potential witness. Though he maintains he's representing the couple on other legal issues.

The Circuit Attorney is declining comment. Kim Gardner's spokeswoman would only say the investigation is ongoing.