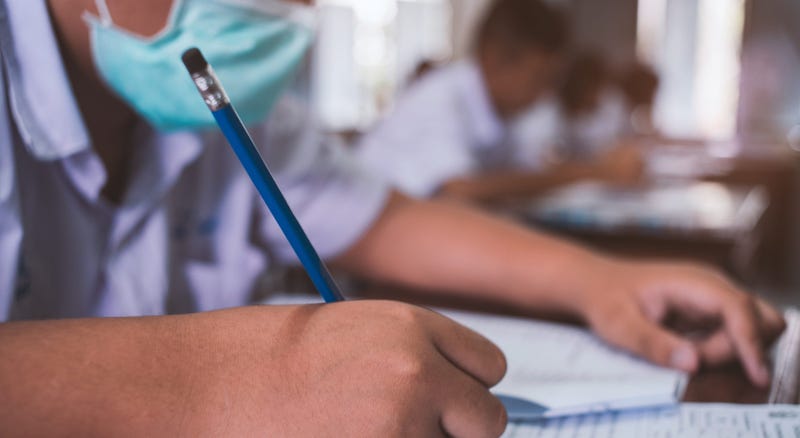 ST. LOUIS (KMOX) - As dozens of school districts in the St. Louis area are preparing to announce reopening plans for the fall, a group called One Missouri is hoping decision makers will consider their recent poll "before jumping on the 'we've got to get kids back in school' bandwagon."

The group of researchers, writers, presenters, and consultants provides "evidence-based information on key issues" in the state, according to OneMissouri.US. They announced the results of a poll on Thursday that asked teachers "what they will do if their school district reopens face-to-face this fall."

We asked MO teachers what they will do if their school district reopens face-to-face this fall. Only 20% said they would return to the classroom, while 80% said they would either choose a different career or retire. 1/2

One Missouri says its poll is not scientific and that it received 268 responses.

In a response to KMOX when asked to provide more information about the poll, the OneMissouri Info Team said:

We simply wanted to get a feel for what educators were thinking at this point in time, knowing reactions can change rapidly due to the fluidity of COVID-19 data.
We understand that many individual school districts are conducting their own internal polling of faculty and staff. We suspect that when the time comes, most districts will build in a remote learning component which will allow teachers to continue in their positions while working from home. As we know, these are challenging times and all Missourians are treading through these unchartered waters together.

Next Monday, many of the 59 school districts and charter schools in the St. Louis area that are members of Education Plus will be announcing their reopening plans for the fall semester.

"I think everybody will release what their best intention is for a plan," says CEO Paul Ziegler, "and I think every district will look a little different."

Ziegler believes many districts will use what he calls an A/B Hybrid schedule.