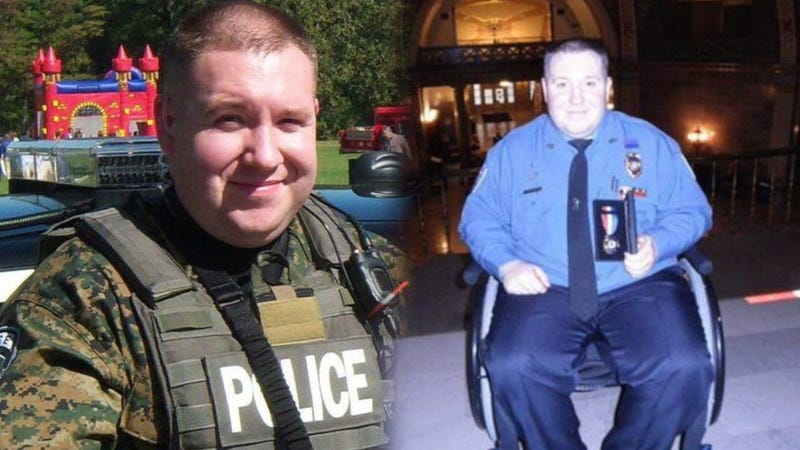 ROCK HILL, Mo. (KMOX) - It has been nine years to the day since former Rock Hill Police Officer Mathew Crosby was shot and paralyzed in the line of duty.

The Facebook post thanked the officer, for "always reminds us to be upbeat and keep moving forward!!"

Multiple commentors on the post also called Crosby an "inspiration."

On April 8, 2010, Crosby was wounded while responding to a domestic disturbance call in Rock Hill. A bullet struck Crosby in the left shoulder and lodged in his spine, leaving him paralyzed.

Then 39-year-old George Jones of St. Louis County man, was sentenced to life in prison for the shooting. He pleaded no contest to assault and other charges at trial in July 2012.

Injured Rock Hill officer Matt Crosby helped with the ground breaking of his new St. Charles-area home. Says he is most looking forward to the man-made lake that will be just feet from his back door pic.twitter.com/MbG8506Adw

Last year, ground was broken in the St. Charles area on new "dream home" for Crosby. Since January 2017, hundreds of residents and area businesses have been raising funds and pledging materials and labor donations to build Matt a handicap-accessible home for him and his two boys, Luke and Ian. While the home construction has begun, the job of raising funds continues for a 5,000 square-foot handicap-accessible home.

You can learn how to help more at CrosbyCrew.org.