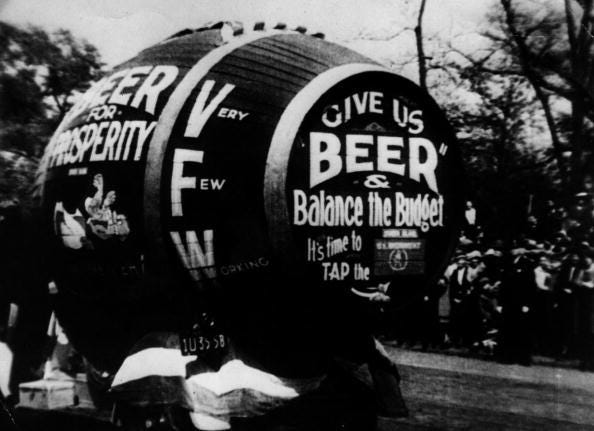 Photo credit A giant barrel of beer, part of a demonstration against prohibition in America. (Photo by Henry Guttmann Collection/Hulton Archive/Getty Images)
By NewsRadio 1120 KMOX

That marked the start of a 13-year period in which the country was officially "dry" due to Prohibition.

Cameron Collins is co-author of the book St. Louis Brews about the local beer industry.

He says while most people rue the day Prohibition became law, it did have some positive impact.

"Before Prohibition, the drinking culture in America was really remarkable," he told KMOX's Brett Blume. "Saloons were out of control, they could really be bad places. As a result of Prohibtion, Americans today actually drink less (than before Prohibition)."

Collins says it also had a big economic impact on St. Louis brewers.

"It devastated the St. Louis economy. At the time, brewing in St. Louis was about 7-percent of the city's industrial output. There was around 30 breweries in operation when Prohibition hit."

Only a handful of those breweries, including of course Anheuser-Busch, were able to survive the 13 years before Prohibition was repealed by the 21st Amendment. And St. Louis as a whole weathered the storm, partly through experimentation.

"Speakeasies and bootlegging and other forms of alcohol started becoming more popular in St. Louis. For example, gin."