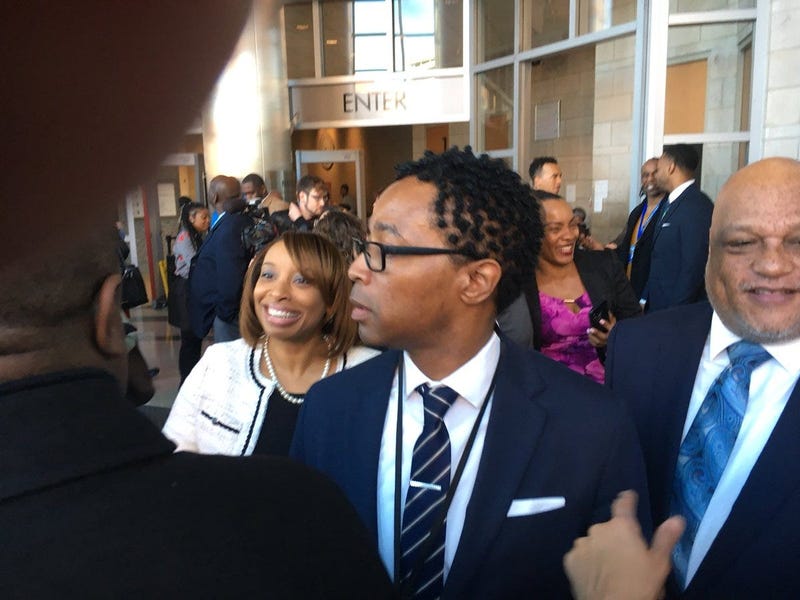 "We're here to talk about The Bell Plan," Bell began, addressing a Justice Center rotunda crowded with more than a hundred supporters and staff, some leaning over the railing of the floor above.

#STL County’s new prosecutor Wesley Bell laid out “The Bell Plan” this morning. Our Kevin Killeen was there and will have reports on KMOX.com and #KMOX 1120AM this afternoon #WesleyBell #STLCounty

Bell outlined his goal of "significantly increasing" the diversion plan started by his predecessor, Bob McCulloch, to provide drug treatment to divert non-violent defendants away from prison.

"Currently only a tiny fraction of the cases in St. Louis County are referred for addiction and those in need of mental health care," Bell said, "But programs of this type have been very successful in other jurisdictions that prioritize these efforts."

Asked how many more defendants per year in St. Louis County he hopes to divert away from prison, Bell offered no specific numbers.

Bell was flanked by representatives of organisations that would play a role in the plan--Affinia Healthcare, Mallincrodt Pharmaceuticals, the Urban League and Better Family Life.

During the brief question and answer session, Bell refused to take questions on other issues surrounding his office:

**He ducked a question from News Channel 5 about his plan to no longer impose cash bail on people accused of Class D and E felonies.

**He declined to answer a KMOX question from the podium about possibly re-opening the grand jury investigation into the police shooting death of Michael Brown.

Bell then walked away, saying "no comment," when asked afterwards if he could at least say whether he is considering a second look at the Michael Brown case, something some of his supporters have called for.

Speculation has been mounting that Bell may be considering a do-over on the Michael Brown case, after Fist Assistant Circuit Attorney Robert Steele announced his resignation in St. Louis City, and Circuit Attorney Kim Gardner issued a statement wishing him well working for Wesley Bell.

Steele has worked on high profile cases for the city including the murder case against for Officer Jason Stockley and the invasion of privacy case against then Governor Eric Greitens.

Steele's last day working for the city is scheduled for January 18.