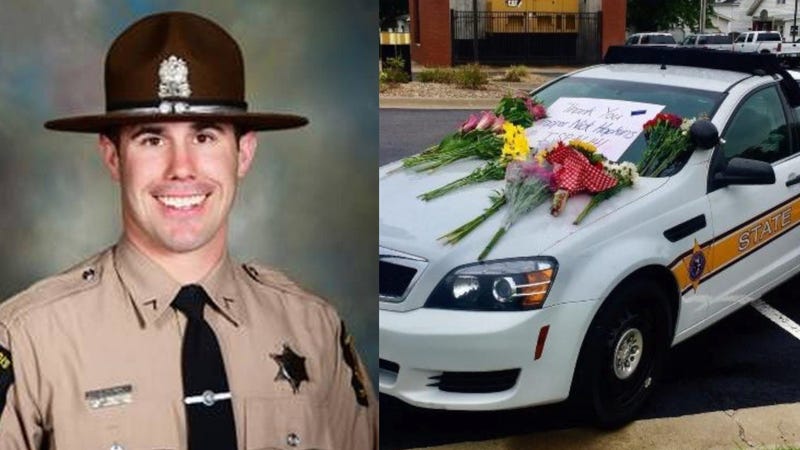 By KMOX At Your Service, NewsRadio 1120 KMOX

The widow of Illinois State Police Trooper Nick Hopkins, speaking at his funeral Sunday morning at Waterloo High School. Hopkins was laid to rest after the service and a procession from Waterloo to Columbia and back.

Whitney Hopkins told the hundreds of law enforcement officers and community members who filled the high school gym, that she and Nick had had the hard conversations, and she would tell him to go, and do what he loved.  "I told him if anything would happen, it would be okay.  We would be strong, we would be brave."

Also euologizing Trooper Hopkins, his brother, Columbia Police Sgt. Zack Hopkins, "Because of you we will strive just a little harder to be kind to others, to live life big, and not to take ourselves too seriously.  Your humor, your kindness, and your selflessness will continue to inspire us forever.  We love you."

Hopkins, the father of four-year-old twins and a baby girl, was fatally shot Aug. 23 while serving a search warrant in Washington Park.

Whitney Hopkins told mourners they should take time for the little things in life. She said she remembers all the times her husband showed up and followed through even when it was hard for him.In addition to family and friends, the bleachers in the Waterloo High School gym were filled with uniformed troopers and officers from other police agencies.Gov. J.B. Pritzker called Hopkins a hometown hero, adding the people of Illinois ``weep for you today.''Chris Grant has been charged with murder in Hopkins' death.