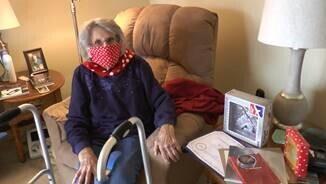 Originally from Ladonnia, Mo., she moved to the Pacific Northwest with her husband, George who was a military police officer stationed in Seattle during World War II.

Clarke remembers Boeing recruitment flyers to help support the bomber line, so she, along with thousands of other women, joined the workforce to assist in the war effort, earning them the popular title of "Rosie the Riveter."

After a year of working for Boeing in Seattle, Bertha Mae returned home to central Missouri in 1943, where she’s lived ever since.

Boeing wanted to help Bertha Mae celebrate her birthday and show appreciation for her work during the war. Three employees from Boeing — wearing masks and maintaining a safe distance, visited Bertha Mae days before her birthday to present her a few birthday gifts from her Boeing family.

Bertha Mae received a certificate of appreciation, a commemorative Rosie the Riveter challenge coin, created to celebrate passage of the Rosie the Riveter Congressional Gold Medal, a book about women in Boeing’s history, and a B-17 model airplane, the aircraft on which Bertha Mae worked in 1942.

“This is an honor,” Bertha Mae said. “One that I don’t think I really deserve, but I like it anyway. Thank you.”

Boeing Global Engagement wants to recognize more of our Rosie the Riveters. If you have friends or family who helped support the war effort during WW II, please send an email to Volunteer@exchange.boeing.com.