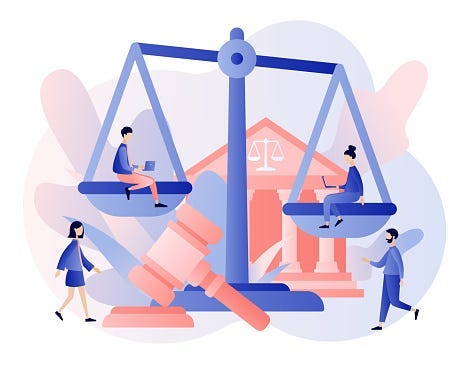 Chief Justice Marla Luckert on Tuesday delivered a written State of the Judiciary report to the governor and the chairs of the House and Senates judiciary committees, as well as to all members of the Kansas Legislature.

In past years, the written report is delivered simultaneous to the chief justice’s formal address to a joint session of the Kansas Senate and House of Representatives. That address, which had been scheduled in January, was cancelled due to a conflict of interest, and efforts to reschedule it later were stymied by the COVID-19 pandemic.

Luckert, who became chief justice of the Kansas Supreme Court in December 2019, said she was disappointed she could not deliver the report in person through the formal address, but she is pleased there was so much to cover in her written report.

“This annual report does more than tally the roughly 400,000 cases processed by Kansas courts. It documents our efforts to modernize court operations to better meet the needs of Kansans,” Luckert said. “It’s an important check-in with the executive and legislative branches of government and the people of Kansas about strides made by the Kansas judicial branch of government to better serve our communities.”

The report is arranged in broad categories that capture the most important advancements in judicial branch operations to occur in the 18-month period between July 1, 2018, and December 31, 2019, or the 2019 fiscal and calendar years combined. It does not include the rapid change to court operations in response to the COVID-19 pandemic, which will be reported in 2021.

Access to and promoting justice in Kansas courts centers on actions to make it easier for people to resolve their legal concerns without infringing on statutory or constitutional rights. It ranges from self-help resources to problem-solving courts to analyzing pretrial detention practices.

“People who represent themselves in court unintentionally strain the system because they need support and guidance normally provided by an attorney, and it can slow case processing for everyone,” Luckert said. “Judges and court employees can’t give legal advice, so any support we offer must not interpret the law or give unfair advantage to the party who does not have an attorney.”

In 2019, there were district-court based self-help centers in five counties: Ellis, Johnson, Miami, Sedgwick, and Wyandotte. Help offered by these centers can range from providing access to computer terminals and simplified forms to volunteer attorneys giving brief legal advice.

The Supreme Court updated its rule that guides court staff about how to provide service without giving legal advice, and its Access to Justice Committee continues to explore how to provide a consistent level of self-help service to people without attorneys through standardized forms and processes.

Related to efforts to expand self-help resources, the Supreme Court made it easier for lawyers to provide free and reduced cost legal services. Through a new rule, the court established the framework for retired, inactive, and single-employer attorneys to provide no- or low-cost legal services. It also relaxed certain reporting requirements for attorneys to eliminate redundant precautionary measures that may have deterred participation.

The court also approved an overhaul of rules relating to dispute resolution to provide clarity and consistency about the process and to make it more accessible to people involved in legal disputes. Through its Advisory Council on Dispute Resolution, the court streamlined training and continuing education requirements, expanded ethical rules, and described how the council will investigate complaints.

Kansas had 19 problem-solving courts in 15 judicial districts in 2019. These specialty courts focus on the reasons for criminal behavior through a team approach involving the judge, court staff, a social worker or mental health professional, prosecutor, and defense attorney. By addressing the reason for the criminal behavior, the person charged can avoid incarceration while getting the help he or she needs.

Specialty courts are for people struggling with alcohol and drug addiction, behavioral and mental health problems, or problems common among veterans.

Near the end of 2018, the Supreme Court created a 15-member Pretrial Justice Task Force chaired by Chief Judge Karen Arnold-Burger of the Kansas Court of Appeals. Judges, defense attorneys, prosecutors, and court services and community corrections officers serve on the task force, which is charged with examining current pretrial detention practices for criminal defendants in Kansas district courts.

The task force plans to issue its final report, including its assessment of practices and procedures used in other jurisdictions, recommendations for training, and proposed pretrial best practices by November 6, 2020.

In 2019, the first two judicial districts moved to the new centralized case management system that is the centerpiece of the eCourt plan to transform the way courts serve the people of Kansas.

The 8th and the 21st judicial districts, which include Clay, Dickinson, Geary, Marion, Morris, and Riley counties, transitioned to the new system in August 2019. The rollout to all state courts, including all judicial districts, the Court of Appeals, and the Supreme Court, will continue in calendar year 2021.

“Having courts in all 105 counties operating on the same system and sharing case data will benefit courts, as well as the people who need our services,” Luckert said. “It also supports our initiatives to achieve greater standardization, efficiency, and accountability."

As courts move to the new system, certain accounting functions, including payment processing, will move to a centralized payment center in the Office of Judicial Administration that was formed in 2019.

Duties now managed by district courts will be done by the centralized payment center, including:

Centralized payment center staff complete these and other functions under the supervision of accountants.

By shifting the responsibility away from district courts, court clerk staff will be able to focus on case processing.

Other benefits to come with the change to the new case management system are standardization of processes, workshare between judicial districts, and remote access to court records.

In 2019, the judicial branch continued to examine the volume and types of work performed by courts statewide to determine the number of staff needed to do that work. These studies allow the Supreme Court to make budget and staffing decisions based on measurable data.

The judicial branch partners with the National Center for State Courts to conduct studies that look at the workload for court services officers, workload for court clerks, and a weighted caseload for analysis for judges of district courts, administrative support staff, and court reporters.

Personnel costs account for about 91% of the judicial branch budget, so the Supreme Court commits to ensuring a workforce structure that addresses needs throughout the state.

Attracting and retaining an excellent workforce

The Supreme Court continues to request funding that will allow it to pay employees and judges at market rates. Even with modest pay increases in recent fiscal years, district court judge actual pay ranked 49th out of 50 states in July 2019, and employee pay continues to be below market from 1.7% to 17.9%.

“The Supreme Court depends on judges and employees to meet its constitutional mandate to provide a unified court system to the people of Kansas,” Luckert said. “A well-qualified, experienced workforce is a crucial component of the court system’s success.”

CLICK HERE for the full 2020 Annual Report of the Chief Justice of Kansas Supreme Court.