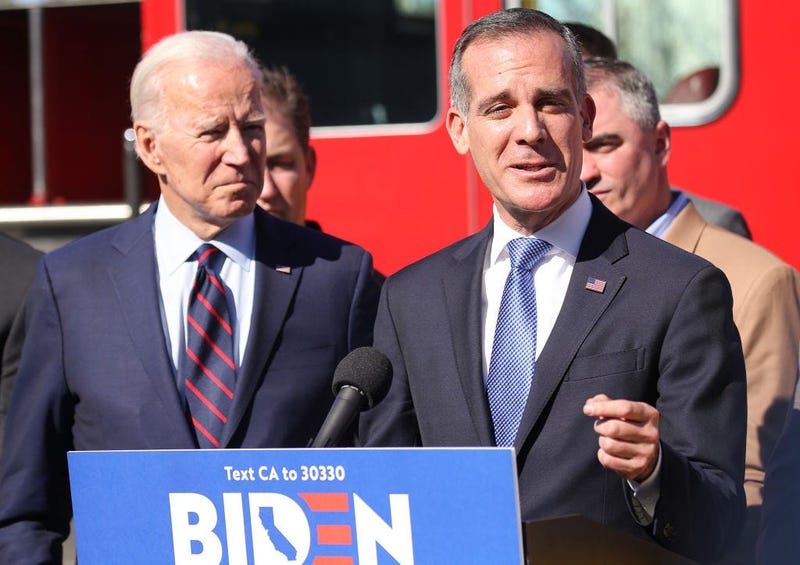 The White House announced on Friday that Los Angeles Mayor Eric Garcetti will be President Joe Biden’s nominee to become ambassador to India.

The White House praised Garcetti in a statement as a mayor that "oversees the busiest container port in the Western Hemisphere, the largest municipal utility in the country, and one of the busiest airports in the world."

"He led LA’s successful bid to return the summer Olympic Games to American soil for the first time in three decades. He currently chairs LA Metro, the country’s second-busiest transit agency, which is building or extending 15 new transit lines, and shifting to an all-electric fleet."

"I have committed my life to service –– as an activist, as a teacher, as a naval officer, as a public servant, and if confirmed, next as an ambassador. Part of that commitment means that when your nation calls, you answer that call. And should I be confirmed, I’ll bring this same energy, commitment, and love for this city to my new role and will forge partnerships and connections that will help Los Angeles," said Garcetti in a statement.

He added that his role as mayor is not over.

"I love Los Angeles and will always be an Angeleno. I want you to know that every day I am your mayor, I will continue to lead this city like it is my first day on the job, with passion, focus, and determination."

CA Senator Dianne Feinstein applauded the White House's decision and commented on the significance of India's relationship with the U.S.

“Mayor Garcetti is an excellent choice to serve as U.S. ambassador to India. The importance of India to the global economy and national security will only continue to grow over the coming years – and having a steady hand to guide our relationship with that nation is vital," she said in a statement.

Garcetti has consistently swatted away questions about a possible ambassadorship since early this year. He responding to such a question in May saying, “I enjoy reading the speculation. I've learned I was supposed to be the secretary of this, that and the other, an ambassador to multiple countries."

Despite denying knowledge of an appointment in the past, Garcetti did speak about how his current role as mayor uses many of the same skills as international diplomats.

“The skills you learn as an elected official are daily diplomacy,” Garcetti said last month. “It is about resolving conflict. It’s about bringing cultures together. It’s about making sure that you build coalitions. It’s about trying to get people who are sometimes at odds with each other to move forward together,” reported the LA Times.

If Garcetti is confirmed by the U.S. Senate, he would leave his mayoral post before the term ends in December of next year, which would trigger a special election or a replacement appointed by the City Council.

Garcetti has a master’s degree in international affairs from Columbia University. He also studied international relations as a Rhodes scholar at Oxford University in the United Kingdom.