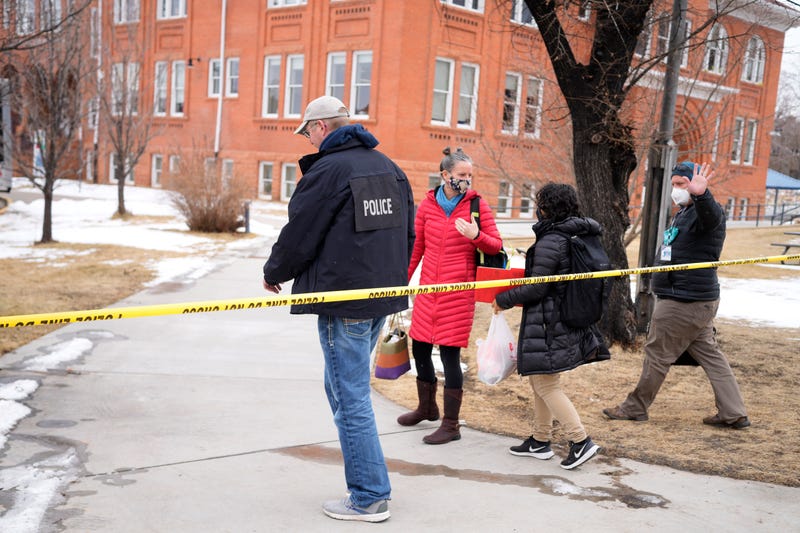 DENVER (AP) — A former lecturer at the University of California, Los Angeles, was ordered held without bail Thursday on a charge of threatening violence against the school in online videos and an 800-page document emailed to dozens of people.

The email was sent Monday and UCLA canceled classroom instruction Tuesday as a precaution. Later that day Matthew Harris, 31, was taken into custody in Boulder, Colorado, where he has been living. Harris had lectured in the university's philosophy department until being put on “investigatory leave” last March.

Harris is charged with transmission of threats in interstate commerce. He did not enter a plea during an appearance in federal court in Denver where his public defender, Mary Butterton, noted Harris does not have a criminal record.

Prosecutor Julia Martinez said authorities would like to keep Harris in custody for now, saying he had made threats against a “whole host” of people and institutions. Another court hearing is scheduled for Tuesday.

According to the criminal complaint, Harris sent an email to about 35 people, some of whom then contacted the FBI. The email had links to what police termed a manifesto and videos, including one titled “UCLA PHILOSOPHY (MASS SHOOTING)” that included footage from the 2017 mass shooting at a Las Vegas music festival and clips from “Zero Day,” a 2003 film loosely based on the Columbine High School mass shooting.

The manifesto contained numerous racist threats and used the words “bomb,” “kill” and “shoot” more than 12,000 times, according to the complaint written by an FBI special agent. Authorities said the manifesto also contained a passage where Harris said that he was writing it “just outside the home of JonBenet Ramsey."

The former home of the Ramsey family is within a half-mile (0.8 kilometer) of Harris’ apartment. JonBenet Ramsey, 6, was found bludgeoned and strangled to death in her family’s basement in 1996. Her killer was never found.

After receiving reports about the email, UCLA police did an “emergency ping” of Harris’ cellphone and discovered he was in Boulder, according to the document. Local police went to his apartment complex, where they saw him leave his unit “yelling profanities and appearing to be highly agitated.”

They tried calling him twice, to no avail. He later spoke to an officer through the door but refused to come out. Then Harris sent an email referencing the police outside. The expletive-filled missive also said “the more u try to stop this message the more violence u gonna unleash,” the criminal complaint said.

Harris was taken into custody after he voluntarily exited his apartment.

Harris' mother told authorities he was diagnosed with schizophrenia last year and the complaint details a period of extremely unstable behavior by Harris beginning in January 2021 when he emailed his mother about plans to “hunt” down and kill a University of California, Irvine, professor. He had briefly met the professor years earlier when both were at Duke University and then allegedly harassed her via email and text message in 2020 and 2021.

In March, the complaint stated, Harris again emailed his mother. This time he threatened to harm himself. A few days later, he asked his mother, “Is UC Irvine reopening for classes in person?”

On March 30, UCLA police were alerted after he sent about 20 emails with pornographic and violent content to female students in his research group. The university placed him on “investigatory leave” later that day.

In April, Harris showed up at his mother's home in North Carolina. He had previously threatened her and her cat, and she began sleeping “with a knife next to her and with her cat in her room with her because she feared what Matthew Harris might do them in their sleep," the complaint said.

UCLA police urged her to have her son involuntarily committed to a psychiatric institution after she reported his behavior to the university. She did and Harris was hospitalized for about a month, then returned to Los Angeles.

UCLA police in May requested a Gun Violence Emergency Protective Order to prohibit Harris from going near any University of California campuses – including UCLA and UC Irvine – as well as contacting the Irvine professor and possessing any guns.

That protective order – as well as subsequent restraining orders sought by the UCLA police and University of California regents -- went into a national criminal background check database that in November caused Harris to be denied when he tried to purchase a handgun in Colorado.

Harris completed his Ph.D. at Duke and soon after began working at UCLA in the spring of 2019 as a postdoctoral fellow. His focus was on “philosophy of race, personal identity, and related issues in philosophy of mind.”

Harris moved to Colorado sometime in the summer of 2021 after being diagnosed with schizophrenia, his mother told the FBI.