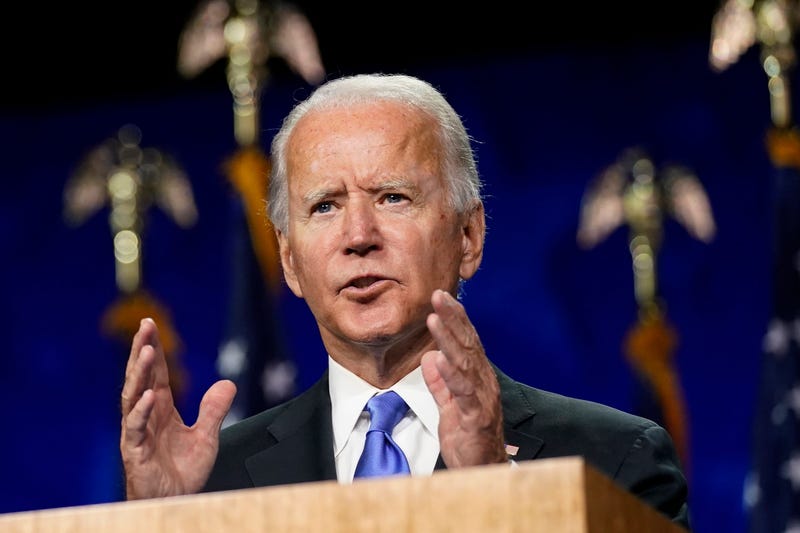 Photo credit FILE - In this Aug. 20, 2020, file photo Democratic presidential candidate former Vice President Joe Biden speaks during the fourth day of the Democratic National Convention at the Chase Center in Wilmington, Del. The former senator and vice president backs an active federal government that he says should support but not constrict private enterprise, and he believes the highest federal tax burden should fall on the wealthiest. (AP Photo/Andrew Harnik, File)
By The Associated Press

ATLANTA (AP) — President Donald Trump describes Democratic challenger Joe Biden as a “tool” of “radical socialists” who are bent on taxing every American business and household into bankruptcy. Some progressives say Biden is a corporate crony who will never address systemic inequalities in U.S. society.

In reality, Biden has taken a relative consistent approach over five decades in politics and during his latest White House bid. The former senator and vice president backs an active federal government that he says should support but not constrict private enterprise, and he believes the highest federal tax burden should fall on the wealthiest.

“Go out and make a million bucks,” Biden would sometimes tell deep-pocketed donors during his early campaign fundraisers. “Just pay your fair share” back into the system.

A look at his tax plans:

Biden says no individual with taxable income of $400,000 or less would see a federal tax increase under his plans, at least directly. Less than than 2% of U.S. households report that level of income. There are several policy provisions tied up in Biden’s promise, but income tax rates often get the most attention.

There are currently seven rates (10% to 37%) applied to varying income brackets. Biden’s plan would raise only the top rate, pushing it to 39.6%, what it was before the Republicans’ 2017 overhaul. That rate kicks in for income beyond $510,000 or so, and more for married couples filing jointly. Separately, Biden proposes capping certain itemized deductions for higher earners. Those changes could mean variable tax increases for individuals down to that $400,000 income threshold — more for married joint filers.

The nonpartisan Committee for a Responsible Budget figures that companies would pass along some of the burden of Biden’s higher corporate taxes to consumers, imposing cost increases ranging from 0.2% to 0.6% on most households at lower income thresholds.

The most obvious philosophical changes in Biden’s plan come on payroll and investment taxes, significant slices of individuals’ tax burdens beyond income tax.

The existing 12.4% payroll tax, which is split between employers and workers and finances the Social Security program, applies only to the first $137,700 of a person’s income. That cap goes up annually with inflation. But it means high-earning professions — top salaried lawyers, physicians, business executives, for example — don’t pay Social Security taxes on wages beyond the threshold.

Biden proposes instituting the tax again beginning at $400,001 of income. The untaxed gap between the cap and $400,001 would close over time with the annual inflationary increases. That would eventually mean a Social Security system where all wage earners, regardless of their income and profession, paid the full freight of payroll taxes.

Biden applies a similar philosophy to investment income. Generally, current law taxes gains on long-term investments — those held for more than a year — and certain dividend income at capital gains rates that top out at 20%. That's lower than the marginal income tax rates for many in the investor class.

Gains on short-term holdings of less than a year are subject to personal income tax rates. Biden proposes extending that principle to all investment gains for any income beyond $1 million, a change that could significantly affect the wealthiest investor class. Think of billionaire investor Warren Buffett and his lament that current law essentially leaves his secretary with a higher effective federal tax rate than he has.

BUSINESS TAXES AND THE “AMAZON” RULE

Biden offers a slew of business and banking tax law changes, but with three headliner proposals. He wants a 28% percent corporate tax rate. That’s higher than the current 21% but lower than the 35% rate before the 2017 overhaul. President Barack Obama had pushed for a 28% rate but Republicans in Congress refused to negotiate.

Separately, Biden wants a 15% minimum tax on “book profits” – net annual income – for corporations with at least $100 million in income. It’s essentially a corporate version of the alternative minimum tax that some wealthier individuals use to figure their personal income tax.

Some observers have called the idea the “Amazon rule” or the “Amazon tax,” alluding to the online retail giant’s ability to use existing law to pay essentially no federal income tax despite its billions in profits.

To the chagrin of some progressives, Biden opposes a tax based on individuals’ net worth. He’s also avoided rekindling debate over taxes imposed on heirs of large estates. But Biden does want one estate tax change that could significantly affect wealthy inheritors and raise tens of billions in revenue each year.

Currently, beneficiaries can sell off assets they inherited and pay capital gains based only on any accrual between the time they gained ownership of the asset and the time they sold it. That basically exempts from taxation any gains accrued by the deceased owner. Biden proposes eliminating that inheritor benefit and instead applying capital gains taxes based on the original value of an asset.

Independent estimates project Biden would raise as much as $3.7 trillion in new revenue over a decade, which would come to about 1.3% to 1.4% of the overall economy, according to the Committee for a Responsible Federal Budget. For context, federal tax receipts for most of the post-World War II era have bounced ranged between 15% and 20% of the gross domestic product, and they're currently on the low end of that range.

It’s worth noting that presidents rarely enact their exact campaign tax proposals. It's a reality of negotiations with Congress and powerful lobbying forces on Capitol Hill. But administrations have generally applied principles outlined during campaigns. For Biden, that means comprehensive tinkering that adds up to a notable, but not seismic upswing for the federal treasury, driven by higher tax bills for the wealthiest Americans and largest corporations.