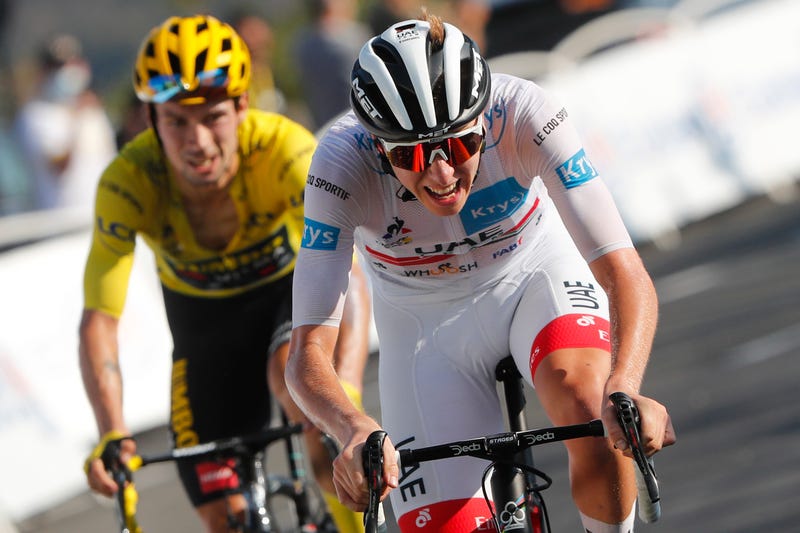 Tadej Pogacar beat yellow jersey-holder Primoz Roglic in a dramatic mountaintop finish to Stage 15, though Roglic retains a 40-second advantage in the yellow jersey and formidable support from teammates who shepherded him up the Grand Colombier climb.

Bernal plummeted down the standings, all but ensuring the end of a five-year streak of Tour victories by his Ineos Grenadiers team, formerly known as Team Sky.

“At the moment, Roglic seems unstoppable," Pogacar said. “But today Bernal cracked and maybe one day myself or Primoz will crack too. There are still a lot of opportunities ahead."

Pogacar stayed with Roglic on the long and brutal Grand Colombier climb despite Roglic having backing from four teammates on his ascent. They drew on their last reserves to sprint for the summit finish, Pogacar taking his second stage win by a bike-length.

Pogacar and Roglic were given the same time. As the stage winner, Pogacar was awarded 10 bonus seconds in the general classification against Roglic's six for second place. Roglic leads Pogacar by 40 seconds overall.

“I was a bit too short at the end. I didn’t make any gift to Tadej. We are good friends but we both want to win. He was just stronger and I was a bit disappointed to lose the stage," Roglic said, adding that the Tour is “far from over.”

Monday is a rest day before five competitive stages including an individual time trial on Saturday, then the traditional procession into Paris on Sept. 20.

Colombian riders started the day ranked third to sixth overall behind the Slovenian duo, but all of them lost time Sunday on the 175-kilometer (108-mile) stage into the Jura mountains, and for two the challenge seemed over.

Two more Colombian riders, Rigoberto Uran and Miguel Angel Lopez, managed to stay with the lead group and sit third and fourth in the overall standings.

Bernal said he had been feeling the effects of the first of the day's three climbs, which had a gradient reaching 22% in places.

“It’s difficult to say how I felt, the feeling was that I was empty — I had no power. When the other riders did a big acceleration, I couldn’t go too hard to follow, but then I recovered really quickly, but my body couldn’t react as normal."

As the long climb from the Rhone valley to the finish began, Roglic’s Jumbo-Visma team had five riders including the Slovenian in the peloton. They worked well together on the climb to protect Roglic and force a pace that put pressure on his rivals.

Restrictions introduced because of the coronavirus pandemic were supposed to ensure that fans were restricted to the flatter sections and foothills and weren’t allowed to throng the narrow approaches to the summit finish. However, there were still some cheering and waving flags near the top.