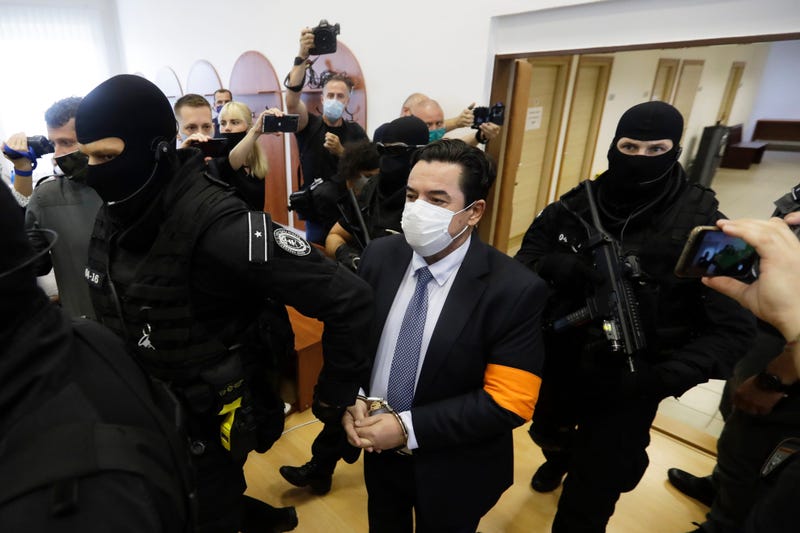 Photo credit Marian Kocner, center, the suspected mastermind in the slaying of an investigative journalist Jan Kuciak and his fiancee Martina Kusnirova, who were shot dead in their home on Feb. 21, 2018, is escorted by armed police officers to a courtroom for a trial session in Pezinok in Pezinok, Slovakia, Thursday, Sept. 3, 2020. (AP Photo/Petr David Josek)
By The Associated Press

PEZINOK, Slovakia (AP) — A panel of judges in Slovakia on Thursday acquitted a businessman accused of masterminding the 2018 slayings of an investigative journalist who had written about him and the journalist's fiancee.

The judges cleared the businessman, Marian Kocner, and one co-defendant of murder in the killings of journalist Jan Kuciak and his fiancee, Martina Kusnirova, both 27.

Judge Ruzena Sabova at the Specialized Criminal Court in Pezinok said there was not enough evidence for the convictions. A third defendant was convicted and sentenced to 25 years in prison. Within hours, prosecutors appealed the verdicts in the country's Supreme Court.

The International Press Institute, an international media freedom group based in Vienna, called the acquittals “a major setback for justice and the fight against impunity."

“We are hugely disappointed by this verdict, which repeats a tragic pattern we see worldwide: the hit men go to jail while those ultimately responsible for the murder of journalists remain free," said International Press Institute Deputy Director Scott Griffen, who attended the trial.

The parents of Kuciak and Kusnirova left the courtroom before the reading of the sentence was completed.

“The only thing I can say is I’m disgusted,” the journalist's father, Jozef Kuciak, told reporters.

Kocner had allegedly threatened the journalist following publication of a story about his business dealings. In total, Kuciak published nine stories about the businessman.

Kuciak filed a complaint over the alleged threats in 2017 and had claimed that police failed to act on it. He had been investigating possible government corruption when he was killed.

Two other defendants previously were convicted and sentenced. Former soldier Miroslav Marcek pleaded guilty to shooting Kuciak and Kusnirova and was sentenced to 23 years in prison in April. Prosecutors said Kocner paid Marcek to carry out the killings.

Another defendant who had acted as a go-between, Zoltan Andrusko, agreed to cooperate with prosecutors in exchange for a lesser sentence and received a 15-year prison term in December. He testified that Kocner ordered the slayings.

The killings prompted major street protests unseen since the 1989 anti-Communist Velvet Revolution and a political crisis that led to the collapse of the government.

After the verdict, President Zuzana Caputova walked to a small memorial to Kuciak and Kusnirova at the site of the protests in the capital, Bratislava, to pay respect to them.

“I have to say that I was shocked by the verdict," Caputova said, adding that she nonetheless fully respected the judges' decisions.

“At the moment, I am thinking about the parents of the two young people," Caputova said. “We all need to know the truth."

The organizers of the previous street protests said they were not planning to rally again even though “many of us feel angry or disappointment. In these moments, it is necessary to keep your head cool, even though it is very difficult."

They called on people to light a candle for the slain couple, which the president did.