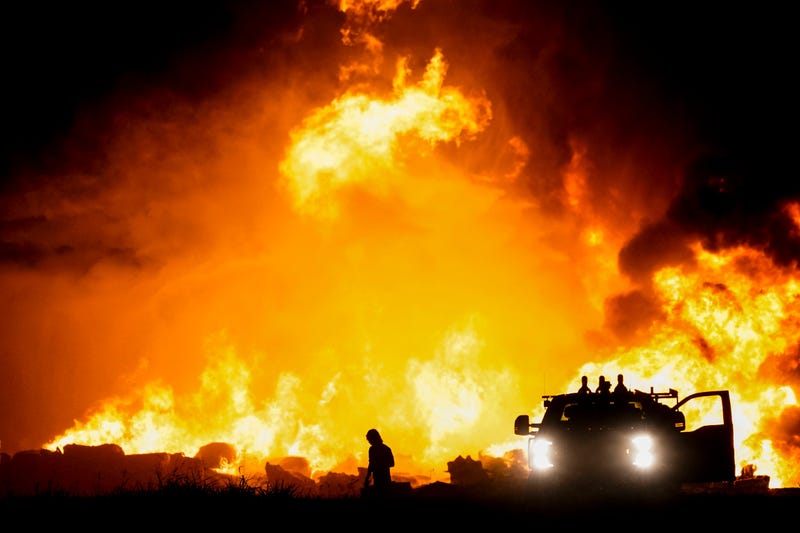 Photo credit Fire crews battle a massive blaze in an industrial area of Grand Prairie, Texas, in the early morning hours of Wednesday, Aug. 19, 2020. A large fire continues to burn at a Dallas-area factory that makes trash bags and other plastics. Authorities say there are no reports of injuries in the fire at the Poly-America factory. (Smiley N. Pool/The Dallas Morning News via AP)
By The Associated Press

GRAND PRAIRIE, Texas (AP) — A large fire believed to be ignited by a falling power line burned Wednesday at a Dallas-area factory that makes trash bags and other plastics, authorities said.

There were no reports of injuries from the massive blaze at the Poly-America complex in Grand Prairie, authorities said. No evacuations were ordered, but people with underlying health conditions were asked to avoid the area.

“This is going to be burning late into tomorrow,” Grand Prairie Assistant Fire Chief Bill Murphy said during a Wednesday morning press conference. “These are rolls of plastic sheeting, huge rolls, and they’re stacked sometimes eight feet high. Plastic is hard to put out and it’s just gonna burn.”

Firefighters believe the blaze started when a power line fell near an area where plastic rolls were being stored, causing them to catch fire, Dallas TV station KTVT reported.

Poly-America is headquartered in Grand Prairie and specializes in products made from polyethylene, such as trash bags, drop cloths and plastic sheeting, according to the company's website.

This story has been updated to correct the last name of the assistant fire chief. His name is Bill Murphy, not Bill Murray.