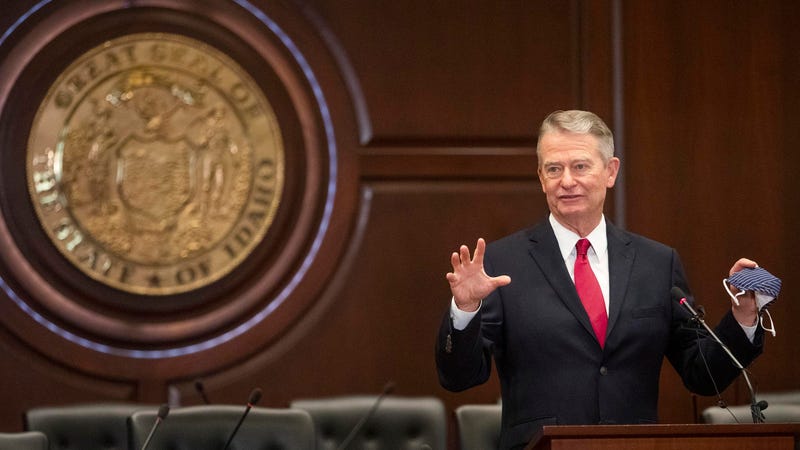 Photo credit FILE - In this Thursday, Sept. 3, 2020, file photo, Idaho Gov. Brad Little speaks at a news conference, at the Statehouse in Boise, Idaho. Governors from 22 Western states and Pacific territories want a bigger say in how the Trump administration defines habitat for wildlife protected under the Endangered Species Act. The Western Governors Association said in a letter Thursday, Sept. 3, 2020, to the U.S. Fish and Wildlife Service that states should be equals in creating the new definition that could have implications for how states manage imperiled animals and plants. (Darin Oswald/Idaho Statesman via AP, File)
By The Associated Press

BOISE, Idaho (AP) — Governors from 22 Western states and Pacific territories want a bigger say in how the Trump administration defines habitat for wildlife protected under the Endangered Species Act.

The new definition could have implications for how states manage imperiled animals and plants, the Western Governors Association said in a letter Thursday to the U.S. Fish and Wildlife Service. The governors insist they are “co-sovereigns with the federal government" and need an equal role in the decision.

The Trump administration is seeking to restrict what land and waterways can be protected as habitat for wildlife facing extinction, one of the latest ways it's sought to roll back environmental safeguards.

The government is trying to redefine what habitat means for the purposes of enforcing the Endangered Species Act, the landmark law that has dictated wildlife protections in the U.S. since 1973. It released a proposed rule in early August.

Governors said they're having to express their views through a public comment process on the proposed rule, saying that isn't enough input and they want the federal government to consult with states.

“It is important for federal agencies and state wildlife managers to maintain a close working relationship to ensure that any new interpretation or application of the term does not result in unintended consequences for state management of species,” according to the letter signed by Democratic Oregon Gov. Kate Brown, chairwoman of Western Governors Association, and Republican Idaho Gov. Brad Little, who's vice chairman.

Once an imperiled species is listed under the act, federal officials designate critical habitat that it needs to survive. That can include where a species lives and areas where they don't live but are deemed essential for survival. Such designations can come into conflict with private landowners and those using public lands for recreation, grazing or energy development.

The U.S. Supreme Court called into question the definition of “critical habitat” in a 2018 ruling. The Trump administration this year put forward a definition it says will “balance effective, science-based conservation with common-sense policy designed to bring the ESA into the 21st century.”

Critics say the administration's definition appears to rule out land or water that needs restoration work or sites that could become suitable for imperiled wildfire in the future, particularly when climate change is considered.

Since taking office, President Donald Trump has sought to scale back environmental protections in favor of industry, ranging from shrinking national monuments to opening up areas for oil and gas drilling. He’s also lifted or suspended environmental regulations intended to prevent pollution during the coronavirus pandemic.

Trump has also sought to scale back or alter endangered species rules, including lifting blanket protections for animals newly listed as threatened and setting cost estimates for saving species.