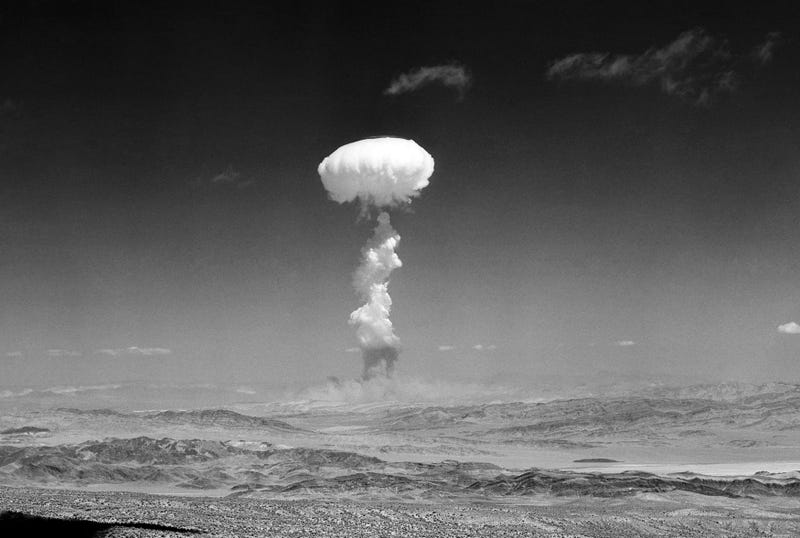 Photo credit FILE - In this April 22, 1952 file photo a gigantic pillar of smoke with the familiar mushroom top climbs above Yucca Flat, Nev. during nuclear test detonation. A defense spending bill pending in Congress includes an apology to New Mexico, Nevada, Utah and other states affected by nuclear testing over the decades, but communities downwind from the first atomic test in 1945 are still holding out for compensation amid rumblings about the potential for the U.S. to resume nuclear testing. (AP Photo,File)
By The Associated Press

ALBUQUERQUE, N.M. (AP) — Deep within a multibillion-dollar defense spending measure pending in Congress is an apology to New Mexico, Nevada, Utah and other states affected by radiation from nuclear testing over the decades.

But communities downwind from the first atomic test in the New Mexico desert on July 16, 1945, are still holding out for compensation for health effects that they say have been ongoing for generations due to fallout from the historic blast.

So far, their pleas for Congress to extend and expand a federal radiation compensation program have gone unanswered. The program currently covers workers who became sick as a result of the radiation hazards of their jobs and those who lived downwind of the Nevada Test Site.

Those excluded from the program include residents downwind of the Trinity Site in New Mexico, additional downwinders in Nevada, veterans who cleaned up radioactive waste in the Marshall Islands and others.

Tina Cordova, a cancer survivor and co-founder of the Tularosa Basin Downwinders Consortium, said the excuse always has been that the federal government doesn't have enough money to take care of those affected.

She said the need is even greater now since the coronavirus is disproportionately affecting those with underlying health conditions and downwinders fall into the category because of their compromised health.

“When you talk about enhancing plutonium pit production and defense spending in the trillions, you can’t tell us there’s not enough money to do this,” she told The Associated Press. “You can’t expect us to accept that any longer and that adds insult to injury. It’s as if we count for nothing.”

U.S. Rep. Ben Ray Lujan, the New Mexico Democrat who advocated for the apology, continues to push for amendments to the radiation compensation program. His office recently convened a meeting among downwinders, uranium miners, tribal members, other advocates and staff in House Speaker Nancy Pelosi's office.

“The congressman believes that the need for medical and monetary compensation has never been more urgent,” said Monica Garcia, a spokeswoman for the congressman.

The concerns of Cordova and other advocates are growing amid rumblings about reported discussions within the Trump administration about whether to conduct live nuclear weapons testing.

The discussions come as the New START treaty between the U.S. and Russia nears expiration in 2021. Russia has offered to extend the nuclear arms control agreement while the Trump administration has pushed for a new pact that would also include China.

While the U.S. House has adopted language that would prohibit spending to conduct or make preparations for any live nuclear weapons tests, a group of senators has included $10 million for such an effort in that chamber’s version of the bill.

The Union of Concerned Scientists, nuclear watchdogs and environmentalists all are pushing for the funding to be eliminated. They sent letters this week in opposition and plan to lobby lawmakers.

“A U.S. resumption of nuclear testing would set off an unpredictable and destabilizing international chain reaction that would undermine U.S. security,” reads one letter.

Kevin Davis with the Union of Concerned Scientists' global security program said resuming live testing would be unnecessary because the U.S. has been able to do sub-critical experiments and use its super computers along with data from past testing to run simulations on the nation's nuclear stockpile.

Democrat Rep. Ben McAdams of Utah is among those leading the effort to ban spending for testing. He said thousands of residents in his state are still dealing with trauma and illness as a result of previous testing.

Dozens of groups also signed on to a letter sent to congressional leaders in May advocating for the expansion of the radiation compensation program.

“We can't continue to allow the government to walk away from their responsibility,” Cordova said.