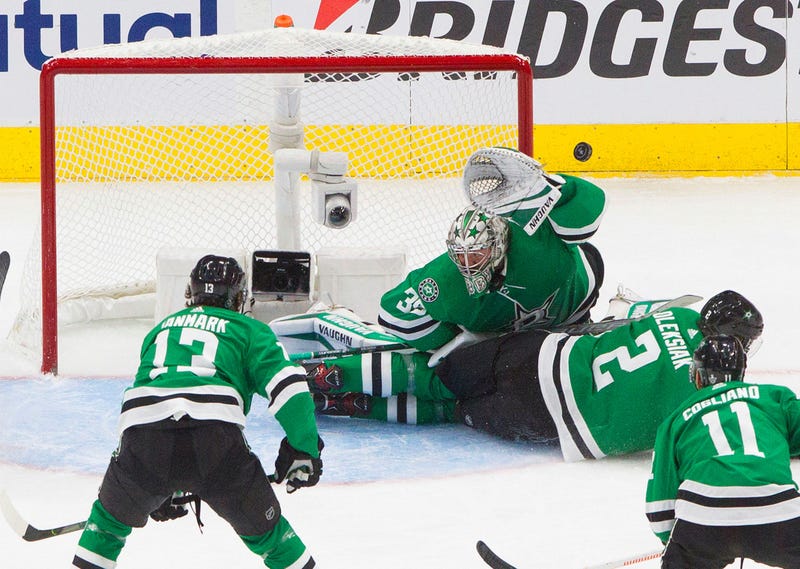 EDMONTON, Alberta (AP) — Anton Khudobin gloved the puck out of the air on Shea Theodore's shot at the most intense moment of the game like it was part of a leisurely morning practice.

“I just tried to find the puck and react to it,” Khudobin said with the same nonchalance. “I don’t know if it’s luck or whatever. Let’s call it luck.”

It's not luck. It's a goaltender so locked in that he has the Dallas Stars one victory away from the Stanley Cup Final.

Khudobin made three of his 32 saves on a crucial 5-on-3 penalty kill late, Joe Pavelski and Jamie Benn scored in the second period and the Stars locked down on the Vegas Golden Knights in the final minutes to win Game 4 of the Western Conference final 2-1 Saturday night.

The Stars won despite being outshot 33-20 and don't seem to mind that they trail Vegas 130 shots to 92 because Khudobin has stopped so many of them.

“He’s going to battle right till the end,” coach Rick Bowness said. “That’s why the guys love playing in front of him. When he was reading the play like he was tonight, he’s making a lot of tough saves look easy. But that’s what he is: He’s a battler, he’s a competitive guy and he’s keeping us in every game.”

Khudobin also is keeping himself in the heads of the Golden Knights, who ran into the same sort of problem last round against Vancouver's Thatcher Demko. Vegas could be dominating the West final, but instead there's head-shaking at creating high-quality scoring chances and emerging with nothing to show for them.

“All we need is to finish,” Vegas caoch Peter DeBoer said. “I think the effort’s there. I think we’re creating a lot of really good looks.”

Khudobin has turned aside a few of those good looks, like when he spun his body to prevent a goal by William Karlsson in the second or dived to deny Brayden McNabb early in the third. The save on Theodore and two others during 1:10 of Vegas 5-on-3 power-play time provided the emotional lift the Stars needed while clinging to the lead.

“We put ourselves in a tough situation there,” said Pavelski, whose tripping penalty set up the 5-on-3 with 6:44 left. “It’s a moment in the game that was huge for our killers to get the job done.”

On the penalty kill and at even strength, Dallas has also done a masterful job of copying the way the Canucks almost beat Vegas last round, by collapsing defensively and giving their goaltender the chance to see a vast majority of the shots from the outside.

“The way the guys are battling, the way they’re blocking the shots, they have bruises and they have bumps and they still sacrifice their bodies to go and block the shots,” Khudobin said. “Unbelievable team effort, I would say. I really appreciate that. It’s huge, huge, huge.”

After Dallas killed off that Vegas power play, the Golden Knights didn't get much the rest of the night. They didn't put a shot on net during the final 3:50, during which the Stars blocked three attempts — one by star center Tyler Seguin with 86 seconds left.

“When the game’s on the line and it’s a 2-1 game, you’re late, you’ve got to do whatever it takes to get that win and our guys did that," Bowness said. “They gutted that out and they blocked the shots, they paid the price and we got the win.”

But Stars players didn't celebrate like they're 60 minutes away from the franchise's first trip to the final since 2000. Pavelski was “happy to see that one go in” when his backhander deflected in off Vegas defenseman Nate Schmidt's stick in mid-air, but he and his teammates looked and sounded determined not to let this chance slip away.

Perhaps it's that Dallas led Colorado last round 3-1 before needing Game 7 to move on, or past playoff failures. But the Stars are treating a goaltender-led Game 4 victory like just another step along the way.

“We’re staying in the moment here as a group,” Benn said. “It wasn't pretty tonight, but we found a way to get it done.”

NOTES: Dallas forward Roope Hintz left with injury in the first period and didnt return. Bowness expected to have an update on Hintz's status Sunday. ... Vegas winger Mark Stone took a shot from Pavelski off his right foot in the second and left before returning in the third. Stone was wincing in pain while playing, and DeBoer didn't have any update on how he was doing. ... Vegas was already without injured forward Tomas Nosek. Nick Cousins replaced him in the lineup. ... Stars winger Radek Faksa was “unfit to play." ... Vegas fell to 10-2 when scoring first this postseason.

Game 5 is Monday night after the New York Islanders and Tampa Bay Lightning play Game 4 of the East final Sunday,