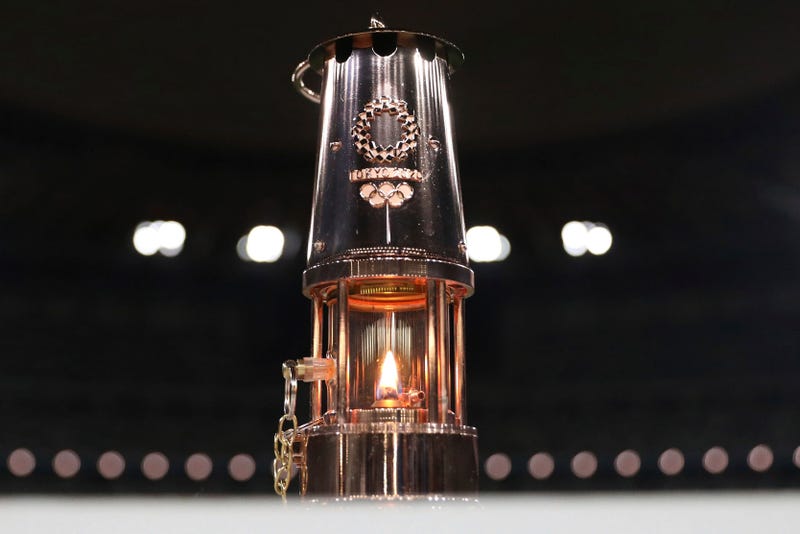 Photo credit FILE - This July 23, 2020, file photo shows the Olympic flame in a lantern, after the "One Step Forward - +1 Message - TOKYO 2020" video message unveiling event at the Olympic Stadium, in Tokyo. The Olympic flame is going on display in Tokyo, just a short walk from the new National Stadium where it was supposed to be burning a month ago. The flame arrived in Japan from Greece in March and has been largely hidden away in Tokyo since the Olympics were postponed by the COVID-19 pandemic until next year. The flame is scheduled to be unveiled on Monday, Aug. 31, 2020, at a small ceremony with Yoshiro Mori, the president of the Tokyo Olympic organizing committee, and Yasuhiro Yamashita, the president of the Japanese Olympic Committee.(Du Xiaoyi/Pool Photo via AP)
By The Associated Press

TOKYO (AP) — The Olympic flame is going on display in Tokyo, just a short walk from the new National Stadium where it was supposed to be burning a month ago.

The flame arrived in Japan from Greece in March and has been largely hidden away in Tokyo since the Olympics were postponed until next year because of the COVID-19 pandemic.

The flame will be on display beginning Tuesday at the new Japan Olympic Museum for at least the next two months. Visitors can only enter the museum, which is located across the street from the new stadium, with a reservation.

Abe was on hand in 2013 in Buenos Aires when the IOC picked Tokyo, and he was the highlight of the closing ceremony of the 2016 Olympics in Rio de Janeiro when he appeared as Nintendo game character Super Mario.

The fate of the Tokyo Olympics remains uncertain. Organizers and the International Olympic Committee say it will open on July 23, 2021. But they have not revealed any details about how 15,400 Olympic and Paralympic athletes will be safe in Tokyo.

Thousands of other staff, technical officials and media would also need to enter Japan. The IOC says it wants fans at events but has not explained how this will happen, or if non-Japanese fans will be allowed.

Organizers are unlikely to start providing details until the fall, or into next year as the impact of the COVID-1 pandemic on Olympic prospects becomes clearer.

A poll this month of almost 13,000 Japanese companies showed 53.6% want the games canceled or postponed again. The IOC has said if the Olympics can’t happen in 2021, they will be canceled. They cannot be postponed again.

A poll in July found that two-thirds of the public also favors another postponement or cancellation.

Tokyo organizers say they are officially spending $12.6 billion to hold the Olympics, although a national audit board says it’s twice that much. In addition, local estimates say the bill for the delay could add on several billion more. Organizers and the IOC have yet to give a detailed breakdown of the new costs.