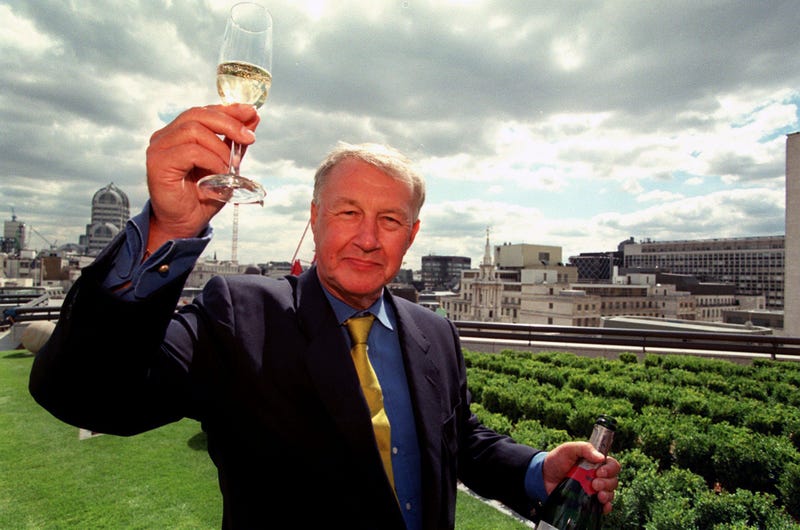 Photo credit FILE - In this Aug. 13, 1998 file photo, Terence Conran celebrates the opening of his new restaurant "Coq d'Argent" in London. Terence Conran, the pioneering British designer, retailer and restaurateur, who built a furniture empire around the world and founded The Design Museum in London, has died at 88. His family said Conran died peacefully Saturday, Sept. 12, 2020 at his home west of London. (Matthew Fearn/PA via AP, file)
By The Associated Press

LONDON (AP) — Terence Conran, the British designer, retailer and restaurateur who built a furniture empire around the world, founded The Design Museum in London and modernized the everyday lives of British people, has died at 88.

Conran, who was knighted in 1983 for his services to design and retail, helped break down class boundaries in Britain by broadening the lifestyle horizons of much of the population. In a statement released by The Design Museum, his family described Conran as a “visionary” who “revolutionized the way we live in Britain.”

“At the heart of everything he did was a very simple belief that good design improves the quality of people’s lives,” his family said, adding that Conran died peacefully Saturday at his 18th-century country home in Barton Court, west of London.

Born in Kingston upon Thames, southwest of London, in 1931, Conran studied textile design at London’s Central School of Art before beginning his career making and selling furniture. His work in 1962 included innovative flat-pack creations — a furniture style that dominates living rooms to this day.

He went on to open restaurants across London, influenced by the elegant simplicity of affordable French restaurants following a visit to the country. His first restaurant, The Soup Kitchen, opened in London in 1953, and in the decades to come, his name was associated with with some of the city's classiest eateries, such as Pont de la Tour and Quaglino's. His restaurant interests extended to Paris, New York, Copenhagen and Tokyo.

Conran opened the first Habitat furniture store in 1964 on Fulham Road in Chelsea. It introduced many young people in “Swinging Sixties” London to a more European style of shopping, eating and living. Its staff were attired in uniforms by Mary Quant and had their hair styled by Vidal Sassoon.

Many more furniture and lifestyle stores would follow in the years to come. In 1974, Conran published the first edition of “The House Book,” a pioneering guide to curating the home that cemented his reputation as one of the primary British voices in design.

“He changed the way we lived and shopped and ate,” said Tim Marlow, The Design Museum’s chief executive. “(He was) instrumental in the re-designing of post-war Britain and his legacy is huge.”

The Conran vision was perhaps best symbolized by his purchase of the iconic Art Nouveau Michelin Building — again on the Fulham Road — in 1987. After a sure-footed refurbishing of the former tire depot, it became home to the Conran Shop's flagship outlet and the high-end Bibendum restaurant, among others.

Conran's ambitions expanded across the Atlantic. As early as 1976, he opened a Habitat shop at the Citicorp building in Manhattan under the name Conran. In the 1990s, his international operations grew further, with the opening of a Conran Shop in Tokyo in 1994, followed five years later with one in New York underneath the 59th Street Bridge along with the restaurant Guastavino’s. Only last year, the first — and largest — Conran Shop opened in Seoul, South Korea.

“From the late 1940s to the present day, his energy and creativity thrived in his shops, restaurants, bars, cafes and hotels and through his many design, architecture and furniture-making businesses,” his family said.

The family also said his involvement in founding The Design Museum near Tower Bridge in London in 1989 was one of his "proudest moments.” It has since relocated to the tony west London locale of Kensington.

“What I hope The Design Museum will do is to help produce a design world in the future, which is important to our country, not only our country, to other European countries,” Conran said last year.

Conran's five children — Sebastian, Jasper, Tom, Sophie and Ned — from his four marriages have followed in their father's footsteps, forging successful careers in the creative sector.