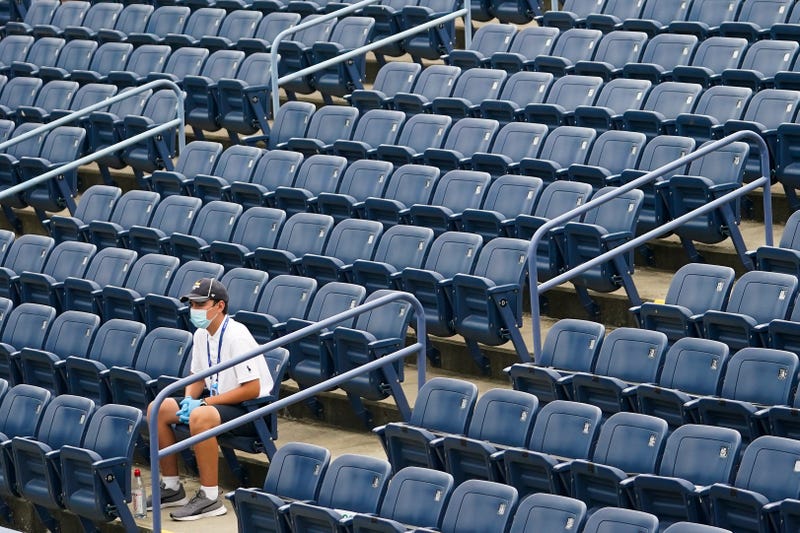 Photo credit A member of the USTA crew watches a match during the first round of the US Open tennis championships, Monday, Aug. 31, 2020, in New York. (AP Photo/Frank Franklin II)
By The Associated Press

NEW YORK (AP) — For all of the obvious concessions to the coronavirus at the no-fans-allowed U.S. Open — near-empty arenas; silence pierced by the occasional clap, sneaker squeak or roaring jet; a lack of line judges — the aftereffects of one player's positive test caused the biggest stir on Day 1.

Yes, plenty of matches were played amid a pandemic at the first Grand Slam tournament in nearly seven full months.

But Monday was significant for introducing terms to the tennis lexicon such as “bubble in the bubble” and “fake bubble." That's because seven players were allowed to stay in the tournament while placed under additional restrictions on their movement and subjected to daily COVID-19 testing after coming in contact with Benoit Paire, the Frenchman dropped from the U.S. Open after testing positive for the coronavirus, a person with knowledge of the situation told The Associated Press.

The players were not identified to the AP by the person, who spoke on condition of anonymity because the U.S. Tennis Association did not announce the names of anyone involved.

But three players from France acknowledged their involvement: Kristina Mladenovic, who is seeded 30th in women's singles; Adrian Mannarino, seeded 32nd in men's singles; and Edouard Roger-Vasselin, who is entered in men's doubles.

Mladenovic and Mannarino spoke about the situation after wins Monday, saying they were part of a group that played cards with Paire. Both said it was tough to focus on court.

“I'm kind of exhausted mentally, but I'm still really happy to be able to play,” said Mannarino, who will face Jack Sock of the United States in the second round. “I need to enjoy it as much as I can.”

Mladenovic said she practiced with Paire for about an hour and spent 30-40 minutes at a card game in the lobby of a hotel being used by the USTA for what it has called a “controlled environment” — staying away from the word “bubble” used by sports such as the NBA that more closely limit access to athletes.

“I am basically in a new ‘bubble in the bubble,’ so there’s not very much I’m allowed to do, which makes it tough for me to compete and mentally be kind of fresh and ready,” said Mladenovic, who doubled over and let out a loud yell after beating Hailey Baptiste of the United States 7-5, 6-2.

Baptiste said she was unaware that her opponent was one of the players who had been in contact with Paire. According to Baptiste, she rode in an elevator with Paire.

Mannarino said he's been forced to take the stairs to his seventh-floor hotel room to avoid contact with other players.

Asked to describe what she can and cannot do, Mladenovic chuckled.

“Let’s make it simple: I’m allowed to play my match,” she said. “Literally, not allowed to do anything else.”

Tournament director Stacey Allaster said the players potentially exposed to the virus because of contact with Paire now must be tested daily for COVID-19, instead of every four days.

Mladenovic said she was told she can spend time with her brother but “no one else,” and has been banned from working out at the gym and “any other facilities that have been put in place for the players.”

“It’s pretty tough for me to accept that ... because it’s not like I’m part of (Paire’s) entourage,” Mladenovic said.

Said Mannarino: “We’re not in a bubble. We’re in a ‘safe environment,’ which is different. It’s really hard for everybody to feel really safe.”

Paire, who used the term “fake bubble” in an Instagram post, is one of two people to have tested positive so far — and the only player. The other was a fitness trainer; two players he was in contact with — Argentina’s Guido Pella and Bolivia’s Hugo Dellien — were kicked out of the Western & Southern Open, the tournament that preceded the U.S. Open at the same site.

As for the difference between those two players who potentially were exposed being dropped from the field and this more recent group remaining eligible to play, Allaster said: “Each case is determined by the facts and circumstances. We will not discuss how the two are specifically different because this is protected health information."

She and other officials still have 13 more days to go as they try to navigate the challenges of staging a major international sports event amid the pandemic.

Among the noticeable changes Monday: There are full complements of line judges only at two courts; the rest are relying on a chair umpire and electronic calls. Everyone is supposed to wear masks unless they're playing. Players have to walk to get their own towels instead of having them handed over by ball people.

And, of course, no raucous roars or belittling boos.

“Normally, the first day of the U.S. Open, there's usually just like a buzz around the grounds. Today it was just quiet. That was weirdest thing for me," said Mitchell Krueger, an American who beat Pedro Sousa, 3-6, 6-2, 7-5, 6-3. "When I was warming up at 10 a.m., that would have been the time the gates would have been opening in a normal year and people (would) start rushing to the courts and getting good seats for the matches.”

There were about 15 people in the seats at 14,000-capacity Louis Armstrong Stadium for the start of Kerber’s 6-4, 6-4 victory over Ajla Tomljanovic.

When Kerber broke to take the first game, one person — her coach — clapped.

“It’s kind of a little bit the feeling when you play, like, practice matches,” Kerber said.

There were seven people in Court 11's bleachers — six after one left in the middle of the seventh game — for No. 27 Borna Coric’s 7-5, 6-3, 6-1 win over Pablo Andujar, whose complaint to chair umpire Fergus Murphy about serve-clock management was easily audible.