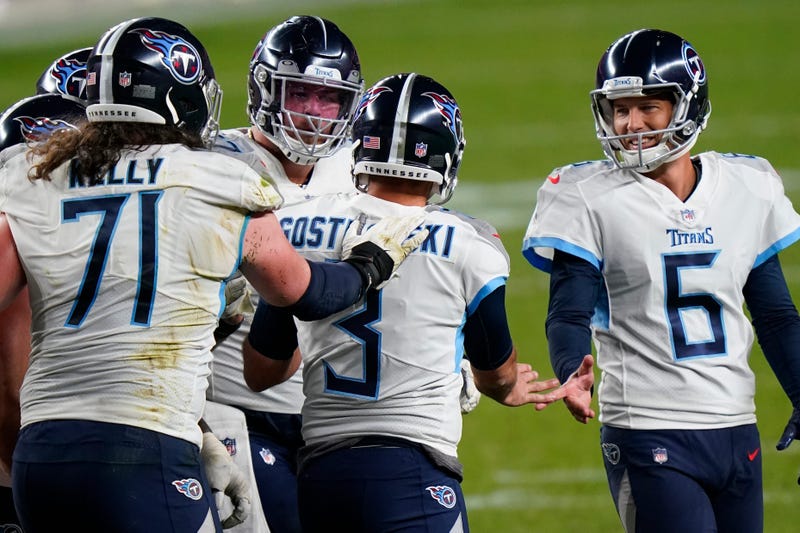 Photo credit Tennessee Titans kicker Stephen Gostkowski (3) celebrates his game winning field goal with teammates during the second half of an NFL football game against the Denver Broncos, Monday, Sept. 14, 2020, in Denver. The Titans won 16-14. (AP Photo/David Zalubowski)
By The Associated Press

The Denver Broncos coach was taken to task on television and social media for his late-game clock management Monday night after a 16-14 loss to Tennessee. Struggling kicker Stephen Gostkowski made a 25-yard field goal in the closing seconds after missing three attempts earlier in his Titans debut.

Before that, Fangio had ample opportunities to stop the clock with under 2 minutes remaining and the Titans content to let it run.

Of course, the field goal attempt was no sure thing given that Gostkowski had already sent one wide right, another wide left and had one blocked. He shanked an extra point, too.

Gostkowski's emotional state partly figured into why Fangio didn't use his timeouts leading up to the game-winning kick, which could have given the Broncos' offense more time to respond.

Denver did get the ball back with three timeouts to work with, but only 17 seconds remaining. Three passes by Drew Lock — one completion — and one spent timeout later, the game was over. Denver wound up taking two timeouts home.

The only thing more ambiguous than Fangio's clock management was his explanation afterward.

"It was two-fold. One, their field goal kicker had obviously been having his problems. I didn’t want to extend the drive so they could get closer,” Fangio said. “No. 2, we would’ve used the timeout but we got the running back out of bounds. We would’ve used the second timeout but they threw an incompletion, which would’ve given us one left when we got the ball back. That was part of our thinking there.”

But commentators weren't buying any of it on social media:

— Hall of Fame tight end Shannon Sharpe: “Can anyone tell me why Fangio didn’t use those 3 timeouts? He knows they don’t carry over until next gm.”

— Football analyst Joel Klatt: “Is there some sort of black market where you can sell unused TOs for straight cash?”

— Klatt, part II: ”Apparently the crowd noise was just too much for Fangio and he couldn’t think clearly. Any other explanations?"

— Common Twitter feeling: “I have no idea why Vic Fangio isn’t using his timeouts.”

“They did obviously, because they weren’t using their timeouts,” Vrabel said. “They were banking on him missing.”

Understandable, given the kind of night Gostkowski was having. He hadn't missed three field goals in a game in his career — until Monday. That sort of night from one of the most accurate kickers in league history, too.

But with the game on the line, Gostkowski came through. He signed with Tennessee on Sept. 3 as a free agent to shore up the team's kicking woes. The Titans had the worst field goal unit in the NFL last year when their first four kickers combined to connect on only 44.4% of field goals (8 for 18).

“I’m grateful for the opportunity,” Gostkowski said of his late-game attempt. "I know I probably didn’t deserve it.”

Really, though, there were plenty of plays that came back to haunt the Broncos. Like being stopped on fourth-and-goal in the second quarter. Denver tried a shovel pass, but tight end Jake Butt was stopped.

“I had no second thoughts there,” Fangio said. "It wasn’t one that I agonized over. We were going to go for that.”

Or late in the game when rookie receiver Jerry Jeudy dropped a pass that could've put the Broncos in field goal range. It was one of two big drops for the first-round draft pick.

“He dropped the ball. He’s not the first guy that’s done that, won’t be the last,” Fangio said. "We expect him to catch that. He expects himself to catch it. It would have put us in field goal range and given us a first down. But those are the mistakes that can cost you when you’re playing a good team.”

Another close call for the Broncos, who lost three games with 30 seconds or less remaining a season ago.