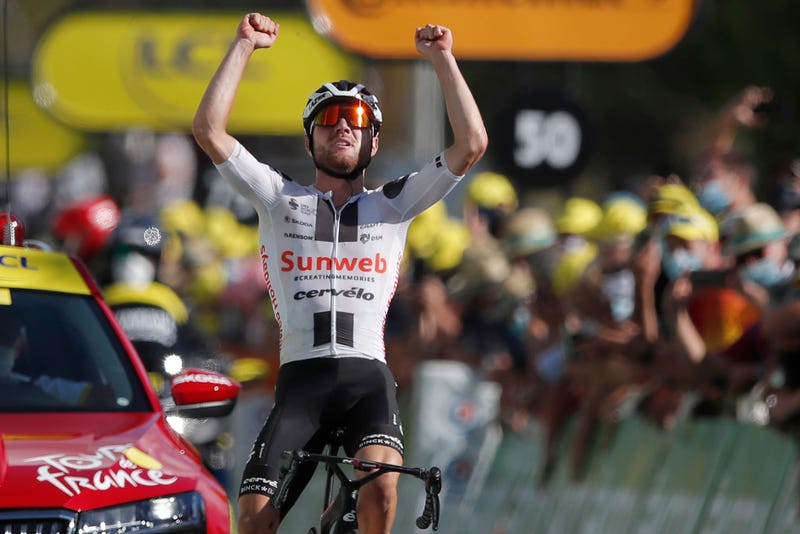 Photo credit Switzerland's Marc Hirschi celebrates as he crosses the finish line to win the stage 12 of the Tour de France cycling race over 218 kilometers from Chauvigny to Sarran, Thursday, Sept. 10, 2020. (Stephane Mahe/Pool photo via AP)
By The Associated Press

The Swiss rider powered away on the Suc au May climb, new to the 117-year-old Tour. He extended his lead by racing with hair-raising speed down the other side and held off pursuers over the last 25 kilometers (15 miles) to win Stage 12 by a comfortable margin in Sarran. It was the 22-year-old Hirschi's inaugural victory at his inaugural Tour.

The Tour's top contenders, including yellow-jersey wearer Primoz Roglic, were still more than two minutes behind when Hirschi finished the 218-kilometer (135-mile) stage into the Massif Central, one of five mountain ranges scaled by this Tour.

The stage paid homage to France’s all-time favorite cyclist, Raymond Poulidor, by whizzing through his hometown where he died last November, Saint-Leonard-de-Noblat in west-central France.

Poulidor finished a record eight times on the Tour podium from 1962 to 1976 but never won and never wore the yellow jersey. He died at age 83.

The stage was rolling and largely flat for the first hour after the start in Chauvigny but got progressively harder as it veered southeast into the lumpy Massif Central.

The four relatively modest climbs of note were a foretaste of harder ascents that await on Friday. Stage 13 is a start-to-finish succession of seven noted climbs, ending with a short but steep ascent of the Puy Mary that is liable to force top contenders into battle.