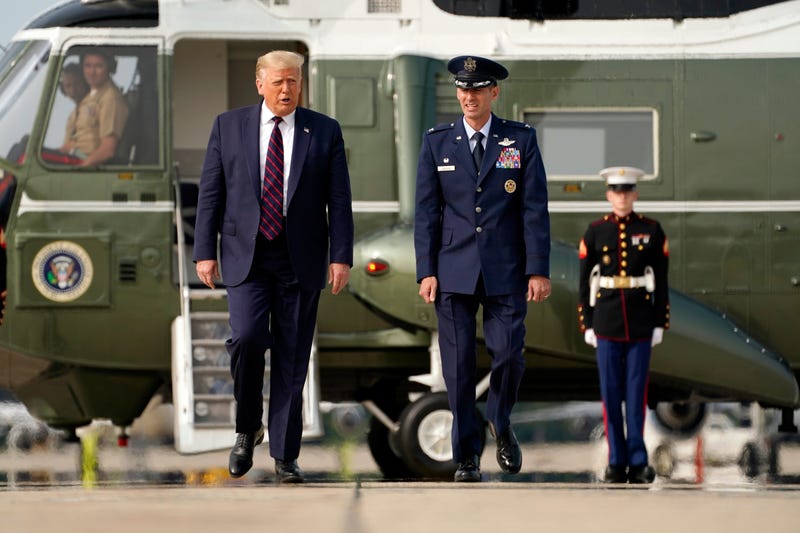 Photo credit President Donald Trump walks from Marine One to board Air Force One for a trip to Philadelphia, to attend an ABC News town hall, Tuesday, Sept. 15, 2020, at Andrews Air Force Base, Md. (AP Photo/Evan Vucci)
By The Associated Press

WASHINGTON (AP) — President Donald Trump's reelection campaign says it is ramping up advertising spending in battleground states, a move that comes as some of his allies have grown worried because Democrat Joe Biden has outspent him in recent weeks.

The Trump campaign announced the “eight-figure” ad buy Tuesday, but declined to say specifically how much will be spent in states that include North Carolina, Florida, Georgia, Michigan, Minnesota, Wisconsin, Arizona and Pennsylvania. The campaign also said it intends to run ads targeting congressional districts in Maine and Nebraska — two states that do not use a winner-take-all approach toward awarding electors.

Trump has an outsized ability to command national media attention and has often shown himself adept at shaping the terms of political debate to his liking. But after struggling to significantly erode Biden's standing in public opinion polls, advertising remains one of the best tools available to help alter the trajectory of an election that is quickly approaching.

That sets up a high-stakes dilemma for Trump campaign officials who are making key spending decisions at a time when Democrats have shattered fundraising records and overtaken what was once a formidable cash advantage enjoyed by Republicans.

“This week’s advertising continues our strategic plan to follow the dates on the calendar, the states that are voting early, the data that always guides our decision-making and our pathway,” Trump campaign manager Bill Stepien said in a statement.

Still, even as the campaign announced the renewed commitment, it continued to be outspent by Biden. It has also reserved significant amounts of air time in states that Trump won handily in 2016, including $15 million set aside for Ohio, according to data from the ad tracking firm Kantar/CMAG.

The campaign has also abruptly cancelled some of its airtime at the last minute, including a series of ads that were supposed to run last week in Arizona, New Hampshire and Pennsylvania. The Trump campaign said the moves were part of a broader shift in advertising spending.

Meanwhile, in Trump's adopted home state of Florida, billionaire former New York Mayor Michael Bloomberg announced last weekend that he would spend at least $100 million of his own money to defeat Trump there. That's likely to put Trump at a disadvantage unless he ups the $32.6 million in ad time he's reserved in the state.

The advertisements Trump is running against Biden use the voices of everyday people to attack the former vice president and try to turn his longevity as a Washington deal maker into a liability.

"Joe Biden could never handle the economy after COVID. There's no way. It would be a disaster," says a woman who is identified as a small business owner in one battleground state ad. “Joe Biden has done absolutely nothing for America in 47 years.”

Another portrays Biden as soft on China and supportive of “bad trade deals” that have helped offshore good paying jobs.

The ads “focus on the economy, which will be the defining issue of the race, and contrasts President Trump’s strong economic record with Joe Biden’s 47 years of failure,” the Trump campaign said in a statement. “The ads airing on local television beginning Tuesday feature real people whose lives have been positively impacted by President Trump’s policies."