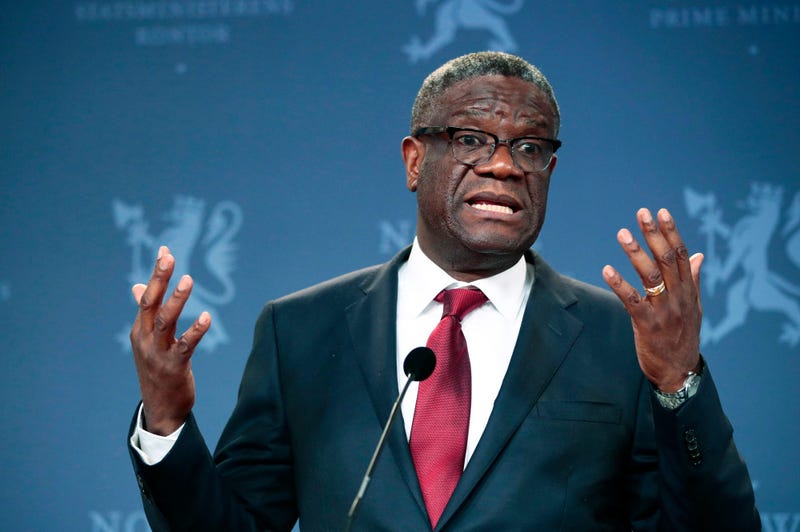 Photo credit FILE - In this Dec. 11, 2018 file photo, Nobel Peace Prize laureate Dr. Denis Mukwege speaks to the media during a news conference in Oslo, Norway. Death threats against the Nobel Peace Prize-winning Congolese doctor have alarmed his supporters who are urging in Sept. 2020 the United Nations to reinstate protection by its peacekeepers, but it likely won't return. (Lise Aserud/NTB Scanpix via AP, File)
By The Associated Press

JOHANNESBURG (AP) — For weeks, a Nobel Peace Prize-winning Congolese doctor has faced death threats, leading alarmed supporters to urge the United Nations to reinstate the peacekeepers who were withdrawn from his hospital months ago. On Wednesday, after international expressions of concern, the peacekeepers returned.

“They will be there as long as necessary,” a spokesman with the U.N. mission, Mathias Gillmann, told The Associated Press.

The death threats against Dr. Denis Mukwege, famous for his work with survivors of sexual assault at Panzi Hospital in eastern Congo, drew condemnation from U.N. human rights chief Michelle Bachelet, Amnesty International, and others. Hundreds of people have marched in support of Mukwege in the eastern city of Bukavu, where his hospital is located.

Mukwege has had U.N. protection over the years since he survived an assassination attempt in 2012 while returning to his home.

The peacekeepers at his hospital were withdrawn this year amid the coronavirus pandemic. On Tuesday, the U.N. said it could not provide protection indefinitely and the personal security of Congolese personalities is the responsibility of national authorities.

Gillmann said the U.N. is working on finding a new security arrangement with national police as the mission in Congo faces an expected reduction. The U.N. has trained Congolese security forces for such protection work in the future.

Those denouncing the death threats against Mukwege have not said where they originated, but a statement from Physicians for Human Rights last month said Mukwege has been the target of an “intimidation campaign” after a security adviser to the president in neighboring Rwanda, Gen. James Kabarebe, “denounced Dr. Mukwege on Rwandan state television.”

Mukwege has received death threats via text message, and he and his family have received threats on social media, the statement said.

“I have received various hate mail and members of my family have been intimidated and threatened,” Mukwege said in a separate statement posted by the Panzi Foundation.

Mukwege has long been outspoken about the need for accountability for the years of attacks by armed groups in eastern Congo that have killed thousands of people, and he seeks the implementation of recommendations in a years-old U.N. human rights report mapping abuses in the region between 1993 and 2003.

Eastern Congo remains one of the world's most unstable regions, with millions of civilians displaced or living under the threat of attack.

In his Nobel speech in 2018, Mukwege repeated his call to act on the U.N. report, asking, “What is the world waiting for? ... Let us have the courage to reveal the names of the perpetrators of the crimes against humanity to prevent them from continuing to plague the region.”

In late July he tweeted about a new massacre in eastern Congo, saying that as long as the U.N. mapping report is “ignored” such killings will continue.

Rwanda’s government in the past has objected to suggestions that its forces had any involvement in the unrest in eastern Congo shortly before and after the genocide in Rwanda in 1994 in which some 800,000 Tutsis and moderate Hutus were killed.

Rwandan President Paul Kagame in a nationally televised interview on Sunday said of the U.N. mapping report, “I don't know what that nonsense is about.” He asserted that “people are starting the narrative at the time of their choosing.” He didn't mention Mukwege in the interview.

Rwanda’s state-run newspaper, The New Times, on Sunday published an unsigned commentary criticizing Mukwege and the U.N. report and dismissing suggestions that Rwanda or Kabarebe was behind the death threats as “unfounded allegations.”

The commentary alleged a “defamation campaign” against Kabarebe and suggested that Mukwege and his allies had “staged” the threats themselves, asserting that they see the instability in eastern Congo as “the essential milk cow on which to build careers and get rich.”

In a statement to the AP, the director of policy for Physicians for Human Rights, Susannah Sirkin, had said the organization was “dismayed by the inadequate, slow, and bureaucratic response to date by the United Nations in light of the serious threats against our esteemed colleague ... The U.N. needs to step up now by restoring the presence of a permanent and around-the-clock (peacekeeping) unit on-site at Panzi Hospital.”

Amnesty International in a statement this month also called on Congolese President Felix Tshisekedi to follow up on his pledges of protection for Mukwege and investigations into the threats.

In comments to European Union lawmakers late last month, Mukwege called for assistance for other human rights defenders who do not benefit from the same public profile that he has.

“It’s very important to create an alert system so that even those human rights defenders hidden in the farthest corners of the country, doing marvelous work ensuring that their people do not suffer atrocities, can be protected as well,” he said.