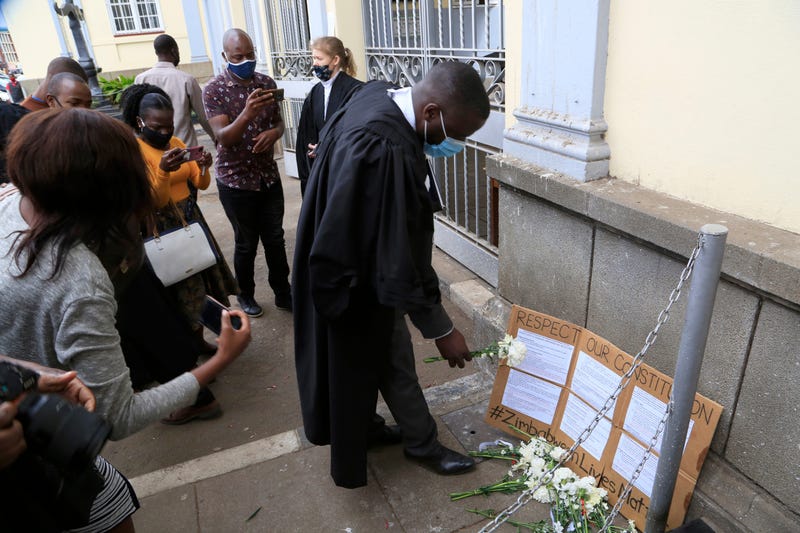 Photo credit Lawyers stage a protest outside the High Court while awaiting a bail hearing for jailed journalist Hopwell Chin'ono, in Harare, Wednesday, Sept. 2, 2020. A Zimbabwean court will on Wednesday rule on a fresh bail bid by Chin'ono, in jail for more than a month, at a time his lawyers say prison authorities are forcing him to mingle with other prisoners despite showing symptoms “consistent” with COVID-19.( AP Photo/Tsvangirayi Mukwazhi)
By The Associated Press

HARARE, Zimbabwe (AP) — Zimbabwean journalist Hopewell Chin'ono walked out of prison Wednesday saying that he had been “strengthened” by the nearly six weeks he was jailed, saying he remains committed to exposing corruption.

Chin'ono, 49, was released on bail Wednesday pending trial on charges of inciting public violence for tweeting his support for an anti-government demonstration. It was his fourth attempt at getting bail, after the first three were rejected.

He denounced the conditions in Chikuribi prison.

“People are living like they are in a concentration camp. The majority of people don’t have masks, people don’t have soap, water and there is no social distancing," said Chin'ono, saying that a cell meant for 16 people holds up to 45 prisoners.

"The life is just horrible,” said Chin’ono of the jail conditions.

He vowed to continue reporting on corruption in Zimbabwe. His bail conditions ban him from using Twitter until his trial is finished, but he said he would find another platform.

Chin'ono said he had a fever but was “feeling much better," in response to reports that he had symptoms of COVID-19.

"Mentally I am fine,” said Chin'ono. A handful of supporters sang: “You are a hero, face the enemy.”

Chin'ono was arrested on July 20 and charged with inciting violence for expressing support on his Twitter account for an anti-government demonstration. That protest was thwarted by police and the military on July 31.

Chin’ono had recently published an expose in which he alleged corruption involving a $60 million purchase of protective equipment for health workers. President Emmerson Mnangagwa later fired the health minister, who has been formally charged with corruption in the case.

Opposition politician Jacob Ngarivhume, an organizer of the foiled protest, was arrested, charged and released at the same time as Chin'ono. He has also been barred from posting on his Twitter account until his case is decided.

Earlier Wednesday, scores of lawyers in their courtroom robes protested outside the High Court demanding that the government and the courts should respect Zimbabwe's constitution. The lawyers charged that the courts have unfairly denied bail to some prisoners and have interfered with lawyers working to defend prisoners, such as Chin'ono.

Chin'ono had previously been denied bail three times and his lawyers say prison authorities forced him to mingle with other prisoners despite showing symptoms “consistent” with COVID-19. Lawyers are still waiting for results of tests carried out this week.