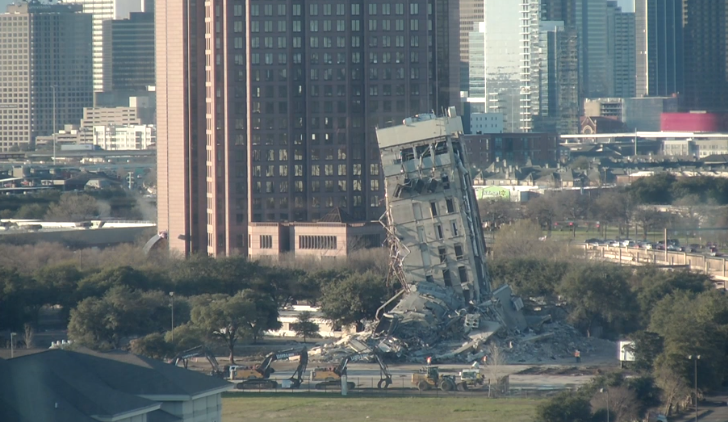 Check out the Leaning Tower of Dallas!

The leaning Affiliated Computer Services building in Uptown Dallas has drawn attention from around the world with people from all over north Texas flocking to see it in person and take pictures.

But it appears that it will all end Monday.

Lloyd D. Nabors Demolition has secured a crane and the tower was expected to come down on Monday, but that did not happen.

The demolition company has asked that spectators respect the fenced area of the construction site for their own safety if they wish to witness the demolition of the tower.

Demolition of the #leaningtowerofdallas is scheduled to start at 9. People outside are lining up on the sidewalk with cameras. “I just love it. It’s artistic. It’s just great for the city. They should keep it up to be honest.” Live report at 8:03 on @KRLD. pic.twitter.com/7NY4scPOb0

The former Affiliated Computer Services building was set to come down last week to make room for a new development called The Center, a 27-acre $2.5 billion project.

At first, it appeared to be like any other building implosion until the center part of the building leaned a bit, but the 300 pounds of dynamite failed to implode the entire building.

What was left was was the center part of the building, now being called the Leaning Tower of Dallas, 35 feet shorter and leaning 15 degrees.

Look up the hashtag for yourself (#leaningtowerofdallas) and see all the pics of people pretending to lift up or push the leaning tower.

Listen to 1080 KRLD on Radio.com | Download the Radio.com app