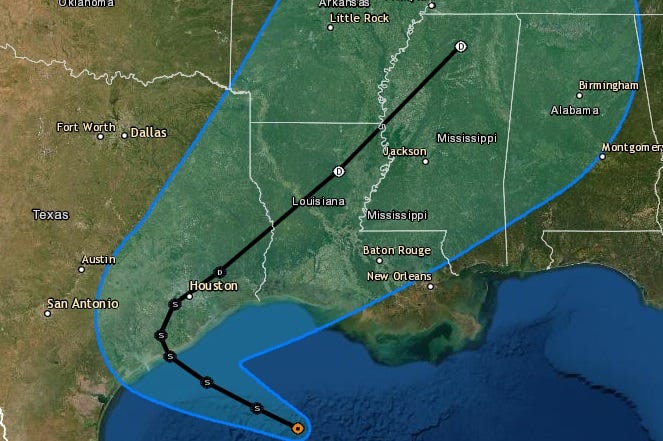 The National Hurricane Center now says Tropical Storm Beta will not become a hurricane in the Gulf of Mexico before making landfall in Texas Tuesday.

The system is forecast to slowly move through the Houston area and drift into Louisiana as a tropical depression Wednesday into Thursday.

"On the forecast track, the center of Beta will move toward the coast of Texas and will likely move inland Monday or Monday night, and remain close to the coast of southeastern Texas on Tuesday."

"Little change in strength is forecast during the next couple of days before Beta reaches the Texas coast. Weakening is anticipated once Beta moves inland."

The biggest threat is heavy rainfall.

Through Thursday, Beta is expected to produce rainfall accumulations of 8 to 12 inches with isolated totals of 20 inches from the middle Texas coast to southern Louisiana.

Persistent winds are also expected to push some water inland outside of hurricane protection along the Louisiana coast from one end of the state to the other.

Forecasters say surge could be about three feet above normal in areas that normally see higher water during tropical events.