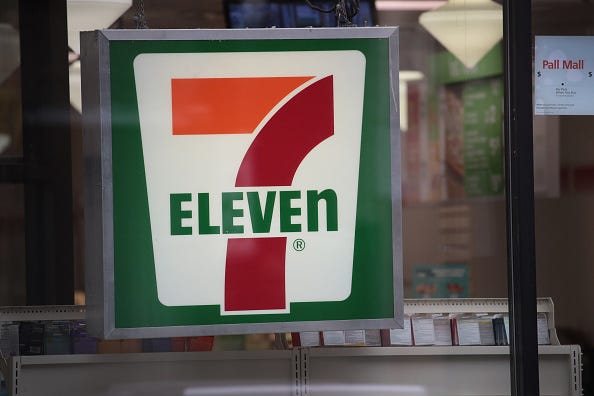 A sign hangs outside of a 7-Eleven store on January 10, 2018 in Chicago, Illinois. Photo credit Scott Olson/Getty Images
By Joe Hiti, Audacy

While it seemed to make quite the meme online with one Twitter user saying, "The prophecy has been fulfilled," and billionaire Elon Musk tweeting about it, 7-Eleven was, in fact, not charging $7.11 for gas.

The photo in question went viral although it was taken by 34-year-old Reddit user Matt Beemsterboer in March 2021.

Beemsterboer told NPR he took the photo three blocks from his home in Chicago last year when a local Mobil gas station was being rebuilt as the Slurpee famous store. But the price was never what it showed.

"And so when they were like, setting up, and they didn't have the pumps active and the store was still being built out. They had the sign up, and they just put it up as $7.11. And I just thought it was kind of funny," Beemsterboer said.

But many jumped to circulate the image online, not knowing it wasn't accurate, taking the chance to complain about gas prices, which have set or been near all-time highs in recent weeks.

Crude oil prices have skyrocketed since the Russian invasion of Ukraine at the end of February. As a result, nations have cut off or begun to limit the amount of Russian oil they are using, creating a demand to produce more elsewhere.

President Joe Biden has continued to call on domestic producers to ramp up their production to help ease the cost for Americans hurting at the pump.

"I want an explanation from them on why they aren't refining more oil," Biden told reporters over the weekend.

The president also shared that he was nearing a decision on whether or not he will suspend the nation's gas tax.

"I hope to have a decision based on the data I'm looking for by the end of the week," Biden said over the weekend before calling on Congress to do so.

Currently, the national average for a gallon of gas in the U.S. is $4.95, according to AAA. However, in Illinois, where the 7-Eleven is located, it's $5.49, still more than a dollar from any prophecy being fulfilled.