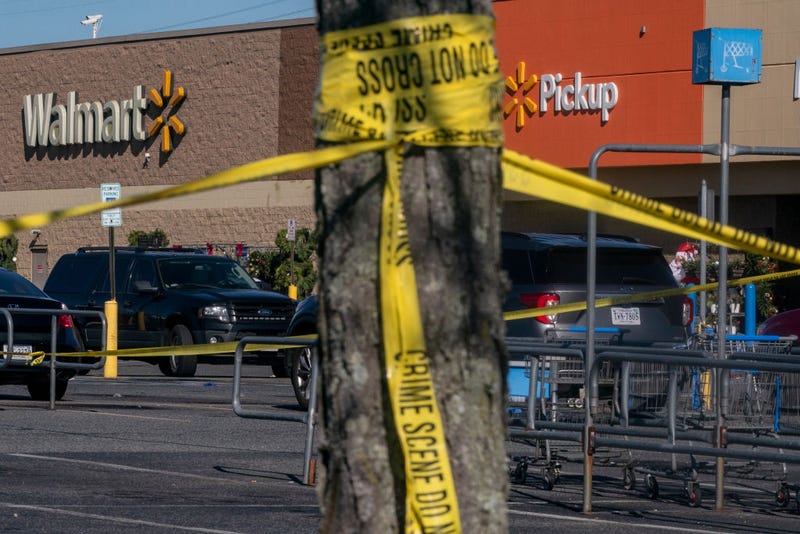 A police line is seen at the site of a fatal shooting in a Walmart on November 23, 2022 in Chesapeake, Virginia. Following the Tuesday night shooting, six people were killed. Photo credit Getty Images
By Stephanie Raymond

A disgruntled Walmart manager walked into the break room at a Virginia store and opened fire, killing six co-workers and injuring others before turning the gun on himself, according to police.

The shooting happened Tuesday night at the Walmart Supercenter in Chesapeake, about an hour before the store was set to close.

During a Wednesday morning news conference, Chesapeake Police Chief Mark Solesky said officers got the call at 10:12 p.m. and arrived two minutes later to find victims and evidence of a shooting, which had stopped at that point, NBC News reported. The scene was declared safe about an hour later.

The gunman was identified Wednesday afternoon as 31-year-old Andre Bing, according to the City of Chesapeake. Officials said he was armed with one handgun and had multiple magazines. CNN described Bing as a "team lead" for the store's overnight shift who had worked at Walmart since 2010.

We are still communicating with the victims’ families and will release their information as soon as possible. We can confirm that the shooter was 31-year-old Andre Bing of Chesapeake. He was armed with one handgun and had multiple magazines on his person.

Employee Briana Tyler told ABC's "Good Morning America" that workers were gathered in the store's break room, as they typically did ahead of their shifts, when the shooting happened.

"I looked up, and my manager just opened the door and he just opened fire," Tyler said, adding that "multiple people" dropped to the floor. "He didn't say a word, he didn't say anything at all."

According to CNN, several coworkers said Bing had exhibited odd and threatening behavior in the past, but the concerns were never reported to management.

"He was always saying the government was watching him. He didn't like social media and he kept black tape on his phone camera. Everyone always thought something was wrong with him," said Shaundrayia Reese, who worked with Bing from 2015 to 2018. She described him as a loner.

Donya Prioleau, who was in the break room when Bing unexpectedly opened fire, said he was "condescending," "didn't have good communication skills," "was quite mean," and "said a lot of disturbing things."

"Half of us didn't believe it was real until some of us saw all the blood on the floor," she said. "We don't know what made him do this. None of us can understand why it happened."

Joshua Johnson, a maintenance worker at the store until 2019, told CNN Bing had previously issued ominous threats if he ever lost his job.

"He said if he ever got fired from his job he would retaliate and people would remember who he was," Johnson said.

A motive for the shooting has not yet been determined.

Six people, as well as the gunman, were shot to death. Two victims and the shooter were found dead in the break room. Another person was found dead at the front of the store, and three others died after being taken to the hospital. The gunman died of a self-inflicted gunshot wound, according to police.

At least six others were injured and taken to local hospitals. One of individuals is currently in critical condition, officials said. Conditions of the other victims were not released.

"Police continue to work with the victims families before releasing their identities," city officials said. "They are currently investigating the employment status of the victims."

Several victims were taken to Norfolk Sentara General Hospital. Chief Medical Officer Terry Gilliland says the situation is something that they prepare for and have done on a regular basis after various incidents -- part of something that makes the hospital a Level 1 Trauma Center.

"That involves having a lot of specialists on call for the hospital, a very dedicated trauma team for 24/7 coverage. Unfortunately we deal with events like this very frequently, violence in the community of various sorts," Gilliland told WRVA.

Gilliland said he could not specifically give conditions of those hospitalized, or what injuries they have.

Hospital Acute Care Surgeon Jessica Burgess said mass shootings have become too commonplace. She was just checking in on colleagues in Colorado Springs, where five people were killed and 17 others injured in a shooting at a nightclub. Now, she says they're checking in on her.

"It's very disheartening that now I'm in the same position," she said.

The shooting remains under investigation by the Chesapeake Police Department, which is receiving assistance from the FBI and Bureau of Alcohol, Tobacco, Firearms and Explosives.

"Our hearts break with the community of Chesapeake this morning. I remain in contact with law enforcement officials throughout this morning and have made available any resources as this investigation moves forward," he said.

Our hearts break with the community of Chesapeake this morning. I remain in contact with law enforcement officials throughout this morning and have made available any resources as this investigation moves forward. Heinous acts of violence have no place in our communities.

Chesapeake Mayor Rick West said he was "devastated by the senseless act of violence."

"My prayers are with all those affected — the victims, their family, their friends, and their coworkers," he said, thanking first responders for their quick actions. "Chesapeake is a tightknit community and we are all shaken by this news. Together, we will support each other throughout this time. Please keep us in your prayers."

In a statement to multiple news outlets, Walmart said it was fully cooperating with law enforcement and providing support for its employees.

"We are shocked at this tragic event at our Chesapeake, Virginia store," a company spokesperson said. "We're praying for those impacted, the community and our associates."

The shooting took place less than two weeks after three people were killed and two others were injured during a mass shooing on the University of Virginia's Charlottesville campus.

It was also the second high-profile mass shooting in a handful of days. On Saturday, a gunman opened fire at a gay nightclub in Colorado, killing five people and wounding 17. 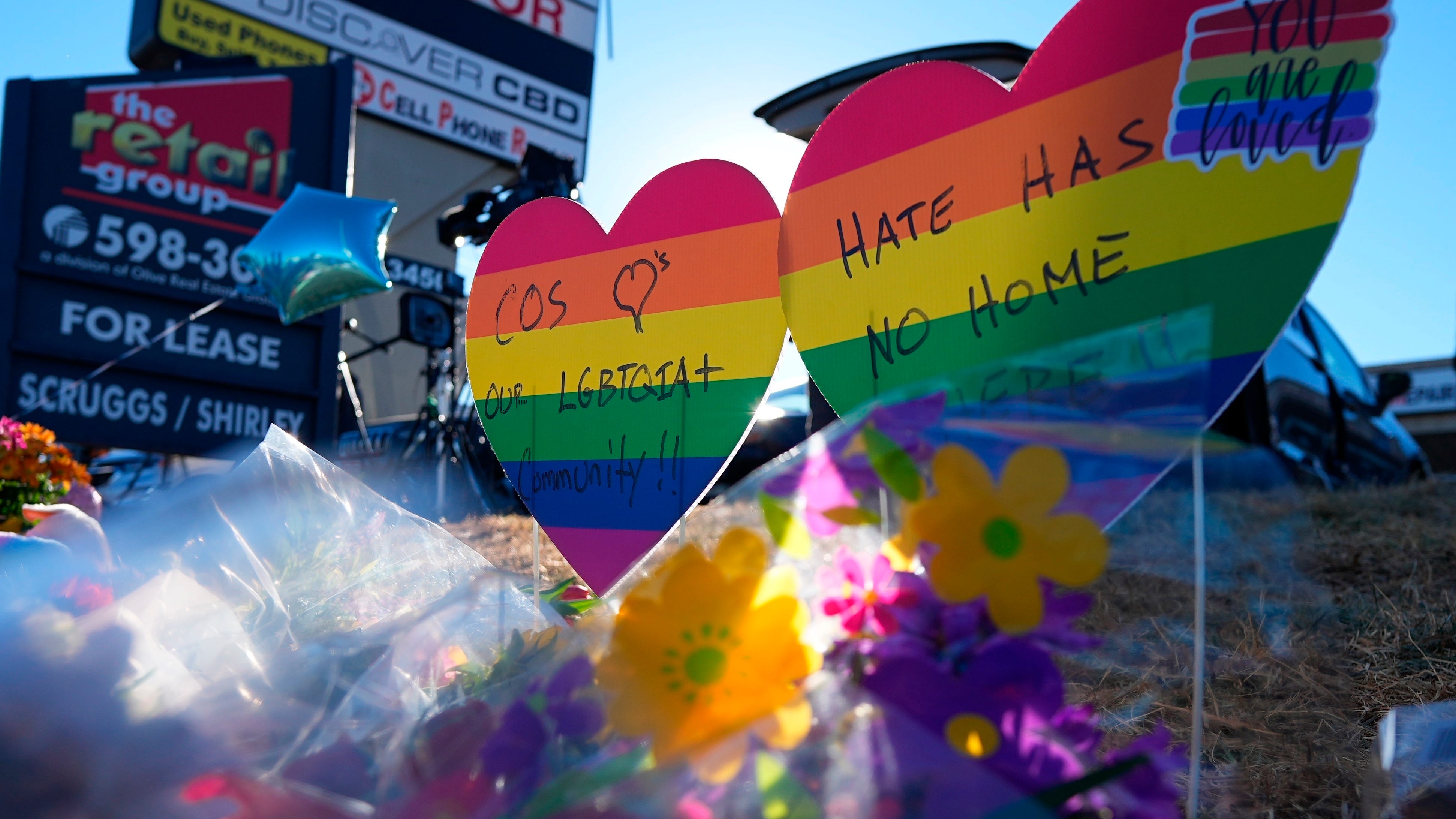