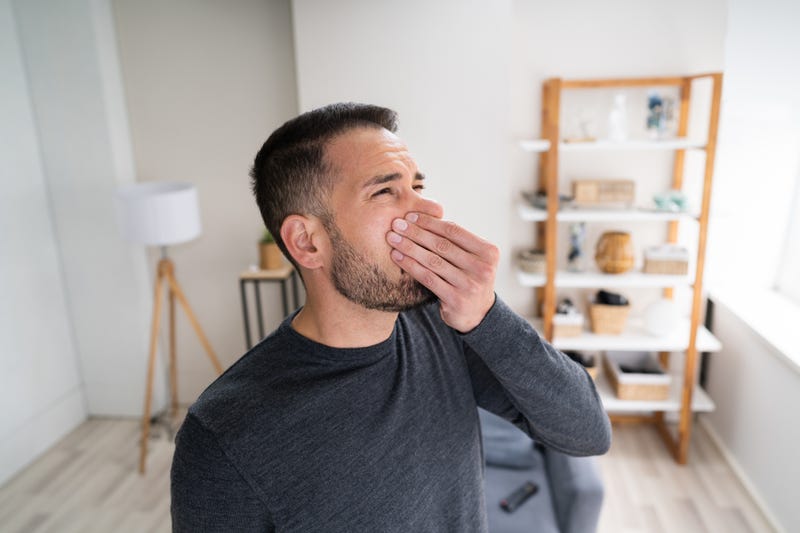 Thousands of residents from Carson, West Carson and portions of Gardena, Torrance, Redondo Beach, Wilmington and Long Beach have reported the noxious rotting-egg-like smell. Many have complained of headaches, burning eyes, nausea and other discomfort.

Podcast Episode
KNX All Local
Working to snuff out a foul smell in Carson; Audio released of the moments before a deadly plane crash in San Diego County; The 101 west of Santa Barbara closed by a wind-driven wildfire
Listen Now
Now Playing
Now Playing

In September, two companies — Virgin Scent Inc. doing business as ArtNaturals and Day to Day Imports — stored large quantities of wellness/beauty products at a warehouse located at 16325 S. Avalon Blvd. in Carson. The warehouse is owned by Liberty Properties Limited Partnership and its parent company, Prologis Inc., according to the SCAQMD.

On Sept. 30, a large fire started on the warehouse property, and efforts to extinguish the fire continued over several days. As a result, chemicals contained in the stored products, including ethanol, passed through the sewer system into the local flood control waterway, the Dominguez Channel. This was followed by the anaerobic decay of organic materials in the channel, which caused elevated levels of hydrogen sulfide to be discharged into the air.

Days later, SCAQMD began receiving odor complaints from residents of the Carson area, soon reaching 100 complaints in a single day. Inspectors traced the noxious smell to the Dominguez Channel, which is under county jurisdiction.

The air pollution agency issued notices of violation on Thursday to Los Angeles County and the four companies linked to the warehouse.

Since Oct. 3, inspectors have responded to more than 4,600 odor complaints from residents in Carson, as well as Gardena, Long Beach, Redondo Beach, Torrance and Wilmington and other parts of L.A. county, the agency said.

It got so bad that early last month, the Los Angeles County Board of Supervisors declared a local emergency and the Department of Public Health conducted door-to-door outreach to more than 8,970 Carson residents, including medically fragile individuals. In addition, the Department of Public Works coordinated with multiple experts and spent an estimated $5.4 million on remediation and providing or reimbursing residents for air filters, air purifiers and temporary relocation.

SCAQMD violation notices can result in civil penalties. In some cases, the company or entity can choose to implement voluntary measures to reduce emissions or otherwise prevent further violations. If no settlement is reached, a civil lawsuit may ultimately be filed in Superior Court, according to the SCAQMD.