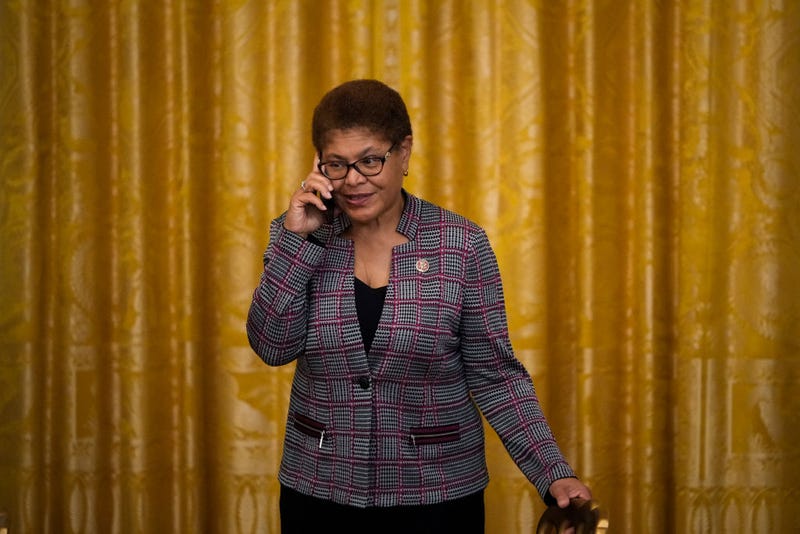 WASHINGTON, DC - JUNE 17: Rep. Karen Bass (D-CA) speaks on the phone before U.S. President Joe Biden signs the Juneteenth National Independence Day Act into law in the East Room of the White House on June 17, 2021 in Washington, DC. The Juneteenth holiday marks the end of slavery in the United States and the Juneteenth National Independence Day will become the 12th legal federal holiday — the first new one since Martin Luther King Jr. Day was signed into law in 1983. Photo credit Photo by Drew Angerer/Getty Images
By Daniella DeRobbio, KNX 1070 NEWSRADIO

Will she or won’t she?

The Washington Post reported that Democratic Congresswoman Karen Bass is open to running for mayor of Los Angeles.

Her spokesperson denied that Bass was thinking about entering the race, however, writing that Bass is not considering running “at this time.”

“She’s a national figure, was in the finals for the U.S Senate appointment that Alex Padilla received and was considered for vice president on the ticket for the position that Kamala Harris got,” Sonenshein said.

“She’s really one of the leaders of the Democratic Party.”

Sonenshein added that L.A. is becoming an influential city in Democratic politics.

“We’ve seen Garcetti become the first mayor to have a chance on the national stage, to become an ambassador and a potential speaker of the House of Representatives,” he said.

“I think it says a lot about the growing providence of L.A. in real politics, not just a source of campaign money.”