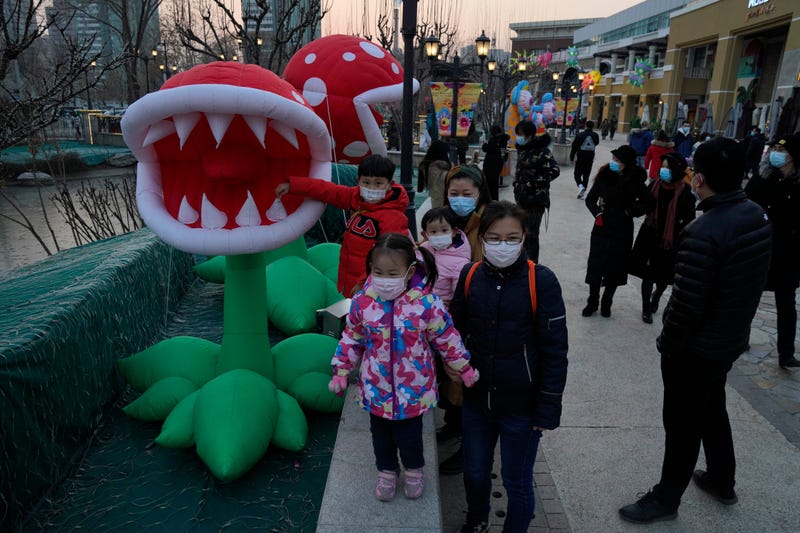 Photo credit Visitors to a mall with a monster themed festival wears masks to protect from the coronavirus in Beijing Saturday, Dec. 26, 2020. Beijing has urged residents not to leave the city during the Lunar New Year holiday in February, implementing new restrictions after several coronavirus infections last week. (AP Photo/Ng Han Guan)
By The Associated Press

Two domestic cases were reported on Friday, a convenience store worker and a Hewlett Packard Enterprise employee. Another two asymptomatic cases were discovered in Beijing earlier in the week.

Beijing is conducting testing on a limited scale in the neighborhoods and workplaces where the cases were found.

To contain any new outbreaks, the Beijing government canceled big gatherings such as sports events and temple fairs. It says applications will be strictly reviewed for any major events. Venues such as cinemas, libraries and museums have to operate at 75% capacity, the government said.

It also called on companies not to arrange business trips outside the city and abroad.

Separately, officials in the northeastern port city of Dalian said Friday that they had tested over 4.75 million people for the coronavirus after 24 confirmed infections this month.

Authorities have shut schools and all public spaces in five neighborhood divisions in Dalian, and only essential workers can leave their compounds to go to work.

Elsewhere in the Asia-Pacific region:

— Japan’s health ministry said Saturday it has confirmed a variant of the coronavirus that has spread across Britain in two Tokyo residents — the first two cases of the new variant found outside of Japanese airports. A man in his 30s tested positive for the new variant Saturday after returning from Britain on Dec. 16, the ministry said in a statement. A second patient is a woman in her 20s who is related to the man. The confirmation come a day after the ministry said it had detected the first cases of the variant in five returnees from Britain who tested positive when they arrived at Japanese airports between Dec. 18 and Dec. 21. Also Saturday, Tokyo confirmed 949 new cases of the coronavirus, a record high for the Japanese capital, as the country struggles with an upsurge that is spreading nationwide. The Tokyo Metropolitan Government said the additional cases bring the prefectural total to 55,851. Japan had 3,823 new cases Friday for a national total of 213,547, with 3,155 deaths, the health ministry said.

— South Korea has reported another 1,132 coronavirus cases as the resurgence worsened over the Christmas week, putting pressure on the government to enforce stricter social distancing controls. The figures on Saturday brought the country’s caseload to 55,902 with 793 deaths. Around 780 of the new cases were from the greater capital area, home to 26 million people, where health workers discovered a large cluster in a huge Seoul prison with more than 500 inmates and workers. Transmissions in recent weeks have also been tied to hospitals, nursing homes, churches, restaurants and army units. After months of complacency, government officials restored some distancing restrictions in recent weeks after easing them to the lowest tier in October and are now clamping down on private gatherings, shutting down ski resorts, restricting hotel occupancy and setting fines for restaurants if they accept large groups. The government will hold a meeting on Sunday to determine whether to elevate distancing controls to the highest “Tier-3,” which could possibly shutter hundreds of thousands of non-essential businesses. Officials have resisted such action for weeks, saying it could unleash further shock on an already weak economy.

— Health officials in Thailand say two new clusters of coronavirus cases have been found that appear to be linked to a major outbreak discovered a week earlier among migrant workers in an industrial province near Bangkok. The new cases were found in 19 members of a motorcycling club who held a holiday gathering on Lanta island in the southern province of Krabi, and in nine people who were in a gambling den in the eastern province of Rayong. On Saturday morning, 110 new coronavirus cases were reported, bringing Thailand’s total to 6,020. Sixty of the 110 were linked to the outbreak among migrant workers.