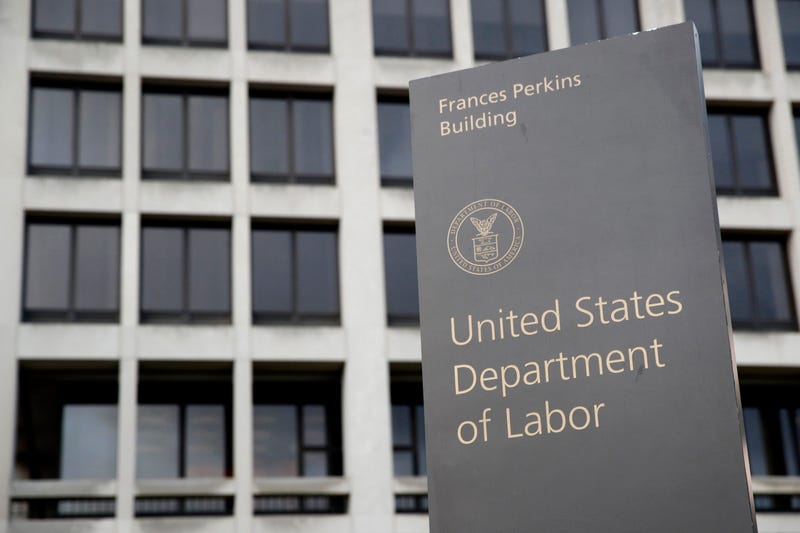 Photo credit FILE - In this May 6, 2020, file photo, a sign stands outside the Department of Labor's headquarters in Washington. A government watchdog has found that the Labor Department’s widely watched weekly unemployment benefits data are providing an inaccurate reading on the number of newly laid off workers because of flaws in the government’s data collection. (AP Photo/Patrick Semansky, File)
By The Associated Press

WASHINGTON (AP) — A government watchdog has found that the Labor Department’s widely watched weekly unemployment benefits data are providing an inaccurate reading on the number of newly laid off workers because of flaws in the government’s data collection.

The Government Accountability Office said in a report Monday that the Labor Department’s weekly report of the number of people filing new applications for unemployment benefits and those receiving continuing claims contained a number of inaccuracies.

The GAO said the problems in data collection and reporting were making it hard for policymakers to get a reliable picture of what unemployment was doing during the pandemic. The report said the weekly data included overestimates and at other times underestimates of the number of people filing for unemployment benefits.

GAO said the problem arose because the Labor Department was using the number of people filing for claims in each state as a proxy for the number of people claiming benefits nationwide. However, this has resulted in inaccurate counts because of large backlogs in processing historic levels of claims and other data collection problems.

“Without an accurate accounting of the number of individuals who are relying on these benefits in as close to real time as possible, policymakers may be challenged to respond to the crisis at hand,” the GAO said in its report.

GAO recommended that the Labor Department revise its weekly news releases to clarify that the numbers in the reports are not an accurate estimate of the number of individuals claiming benefits.

The GAO also recommended that the department pursue other means to get more accurate readings on benefit applications such as using data collected by the states.

The GAO report said that the Labor Department had agreed to make revisions to its weekly news releases and agreed to pursue options for obtaining more accurate data from the states. But the Labor Department balked at a recommendation that it seek state data going back to January 2020, contending that collecting back data would put too much of a burden on already strained state unemployment offices.

In response to the pandemic which triggered shutdowns and the loss of millions of jobs, Congress provided support through three programs. It boosted relief through the regular jobless program by $600 weekly to provide more support. It also extended this relief from the usual 26 weeks to 39 weeks and it also created a Pandemic Unemployment Assistance program which provided benefits to gig-economy workers and the self-employed.

The program providing an extra $600 in weekly benefits expired in August. The program to help gig-workers and the self-employed and the extended benefits program are both due to expire at the end of December.

Congressional negotiators have so far been unable to reach agreement on reviving these benefit programs with Democrats and Republicans remaining far apart on the size of another relief bill.

The GAO report also found that the benefit payments under the program to help gig workers and the self-employed found that the majority of states had been paying the unemployed in these programs the minimum allowable benefit instead of the amount they would be eligible to receive based on their prior earnings.

The GAO findings were part of the congressional watchdog agency's routine reviews of the operation of the programs Congress passed last spring to provide support for the country after the economy went into deep recession.

Rep. James Clyburn, D-S.C. and the chairman of the House Select Subcommittee on the Coronavirus Crisis, said the new report highlighted continued failures of the Trump administration in dealing with the crisis.

“With the coronavirus killing more than one thousand Americans each day, I strongly agree with GAO that we need urgent actions to prevent the further loss of Americans' lives and livelihoods,” Clyburn said in a statement.