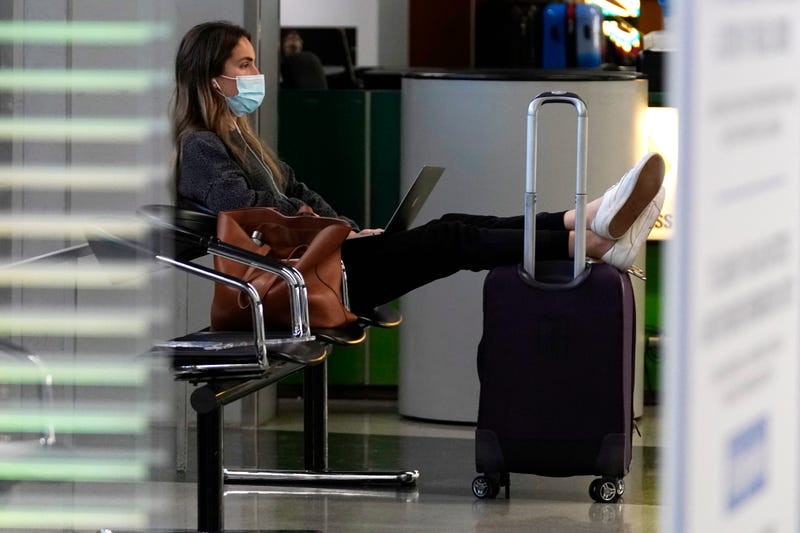 Photo credit FILE - A traveler wears a mask as she waits for her flight in Terminal 3 at O'Hare International Airport in Chicago, Sunday, Nov. 29, 2020. The coronavirus pandemic created winners and losers in the business world. Wall Street recovered after March, even though Main Street is still struggling. As few people traveled, the airline industry needed billions of dollars in aid from the government and is still threatening to lay off workers.(AP Photo/Nam Y. Huh)
By The Associated Press

By March 23, Apple had lost $435 billion in market value in about five weeks and many of its retail outlets were shut as the virus pandemic walloped the global economy and stock markets. Meanwhile, a report issued by the National Bureau of Economic Research found that 2% of small businesses surveyed had shut down permanently in March.

On Dec. 30, Apple's stock market value totaled $2.29 trillion, up 133% since March 23. Meanwhile, Congress has approved nearly $300 billion in additional relief for small businesses, money that many hard-hit owners only hope can help them survive until the pandemic finally eases

The success of Apple and other big technology companies and the struggles of the smallest of businesses is just one example of how the pandemic created winners and losers in the business world in 2020. Wall Street recovered after March; Main Street is still struggling.

In 2020, it hasn't been uncommon to work remotely in sweatpants — while meeting on video conferencing platforms like Zoom — hop onto an expensive high-tech exercise bike afterwards and have your favorite restaurant dish delivered to your home (by a driver trying to earn an extra buck and hoping not to catch the coronavirus).

Of course, the flip side of that scenario has been deserted office buildings, empty restaurants and sparsely-populated gyms. And as few people traveled, the airline industry needed billions of dollars in aid from the government and is still threatening to lay off workers.

What follows is a look at those businesses that benefitted from the pandemic and those that faltered.

Big Tech was the big winner by far of the pandemic. Lockdown orders accelerated the big shift in life online that had already been underway. With work- and shop-from-home suddenly the norm, profits proved resilient for Big Tech even as the pandemic crushed movie theaters, malls and other industries. Apple, Microsoft, Amazon, Facebook and Google’s parent company now account for roughly 22% of the S&P 500 by themselves. Never before have five companies been so dominant on Wall Street. At the start of the year, those five accounted for less than 17% of the index. As 2020 closes, though, pressure is rising. Regulators across the country and the world are putting Big Tech under more scrutiny, which may jeopardize their leadership. (Take a closer look at the year in technology here.)

As movie theaters closed and lockdowns descended across the country, people turned to the ever-growing number of video streaming services for entertainment. Americans increasing their time streaming by 75% in the second quarter from a year ago, according to Nielsen, as the pandemic accelerated the trend of people shifting to watching TV online rather than via traditional cable. Among the new services launched were NBCUniversal’s Peacock and WarnerMedia’s HBO Max. Netflix was a big winner, adding 28 million subscribers through the first nine months of the year. And Disney+ gained 86.8 million subscribers in just one year, a bright spot for Walt Disney Co., whose other businesses, including movie studios and theme parks, were upended by the pandemic.

As people hunkered down at home because of the coronavirus, restaurant delivery companies that were merely convenient in 2019 became essential businesses in 2020. Grubhub’s revenue jumped 36% through September as more restaurants started using app-based delivery services to survive full or partial shutdowns of their dining rooms. At Uber, its Uber Eats delivery service brought in more money during the third quarter than the signature ridesharing business. And the trend is global. DoorDash, for instance, now offers delivery from 390,000 merchants in the U.S., Canada and Australia. The company’s shares jumped 86% in their stock market debut on Dec. 9.

Fitness regimens shifted from the gym to the home in a big way during 2020. Interactive fitness bike maker Peloton was one of the biggest winners of the workout-from-home trend. Revenue during the first nine months of the year more than more than doubled to $1.9 billion as its high-tech bikes and treadmills found more homes. Subscriptions rose dramatically during the year, reaching just over 1.3 million by September compared with 563,000 a year earlier. Meanwhile, gyms did not fare so well as people avoided crowded places. Planet Fitness saw revenue plunge 45% through September as memberships fell and the company furloughed workers. Others such as 24 Hour Fitness sought bankruptcy protection.

More homebound Americans got pets during the pandemic, and investors have taken note. Sixty-seven percent of U.S. households now own a pet, according to the 2019-2020 National Pet Owners Survey by the American Pet Products Association. That’s up from around 56% 30 years ago. Looking to cash in on the trend, San Diego-based Petco this month filed for an IPO. The details remain under wraps, but last year’s IPO by online pet supplies seller Chewy provides a drool-worthy comparison. Chewy’s stock has quadrupled since its 2019 IPO. The stock of another pet supplies company, Freshpet, has more than doubled this year.

And, the industries that lost ground in 2020:

Travel for work and leisure evaporated in 2020. Planes were empty and airports were ghost towns. On April 14, the Transportation Security Administration screened just 87,534 passengers at U.S. airports, down a stunning 96% from the same day in 2019. Southwest Airlines CEO Gary Kelly said last month that business travel, a big source of airline revenue, was down 90%. Far fewer people needed hotel rooms as well. Market data company STR said that the end of October, U.S. hotel occupancy for the year to date averaged 45%, down from 66% for all of 2019, And forget about escaping on a cruise: Most major cruise companies have voluntarily halted sailings from U.S. ports through the end of February 2021.

The coronavirus and the drastic measures put in place by government officials to try to control its spread had a severe toll on many small businesses in the U.S. Restaurants, hair salons, event planners and other businesses that rely on people being in close proximity were particularly hard-hit, as were those tied to tourism. In April, payroll provider ADP reported nearly 20 million jobs were lost at U.S. companies, more than half at businesses employing under 500 people. A government relief program helped by giving out more than 5.2 million loans to small businesses and non-profits between April and August. Congress approved another round of funding but many companies could still fold.

Untuck it? More like don’t even wear it. A sizable chunk of the millions of people forced to work from home by the coronavirus pandemic have been less inclined to wear business attire. According to retail industry analyst NPD Group, sales of men’s suits fell 62% from March to October compared with the same period in 2019. People are choosing comfort over style, a trend that was already in motion but accelerated by COVID-19. Consumers are “using active apparel for everyday purposes, which does not always include exercise,” said NPD analyst Maria Rugolo. That’s good news for makers of sweatpants, tee-shirts and even pajamas.

Commercial real estate has been among the industries hardest hit by the pandemic, and there are doubts about how quickly it will recover. Vacancy rates for retail, office and other property types are up sharply from a year ago. Apartments are bucking the trend, benefiting from increased demand for housing. Real estate sector stocks are one of the few sectors to be down for the year. The pandemic forced millions of people to work from home and turn to e-commerce more than ever to buy groceries and other goods. These trends, already gaining momentum before the pandemic, have accelerated. The question is how much will they affect demand once the pandemic is over.

The oil industry was pummeled after travel was halted in efforts to contain the coronavirus, sending demand for jet fuel and gasoline plummeting. Producers were already struggling before the pandemic struck, due to a weak global economy and a market flooded with cheap oil. As the coronavirus spread and Saudi Arabia and Russia mounted a price war, oil prices plunged. Prices recovered but languished around $40 a barrel for months, well below what most producers need to break even. The oil, gas and chemical industries laid off 107,000 workers over the spring and summer, according to a Deloitte Insights study. Oil giants Exxon Mobil, Chevron and others curtailed spending and slashed their workforces.